A slip before breakfast 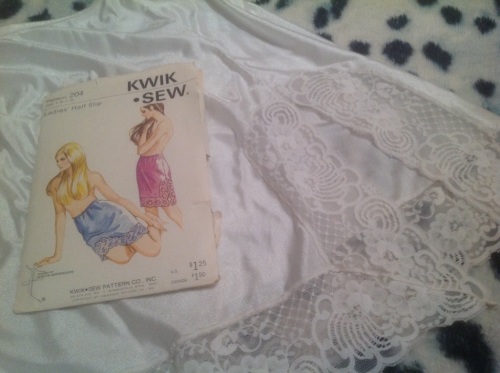 I am definitely on a roll. Or perhaps just avoiding other, less fun, projects. Regardless of the reasons, I got up last Sunday, and cut out two more slips from my nylon tricot, finishing one before breakfast.

In my defense, it was a half-slip, and a rather late breakfast.

A half slip is sorta like diet food, I think. All the right elements seem to be there, yet somehow the good stuff is missing. This slip doesn’t exactly make me wriggle with delight, nor does it ooze demure sexiness. 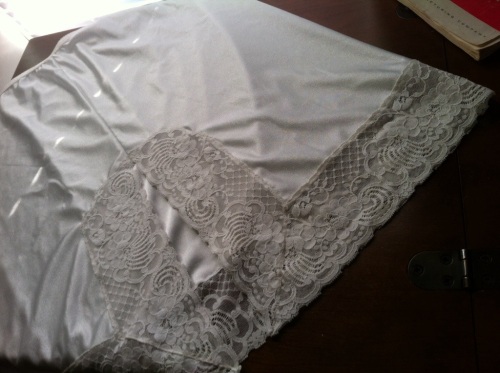 This is another early Kwik Sew pattern, if you can call a trapezoid with a slight curve over the hip a pattern. I had a bit of a scare when I opened the envelope (I’m very lax about checking through my vintage patterns—I’ve only had one or two severe disappointments, so I don’t feel very motivated to improve my care)—what came out first was a Sew-Knit-n-Stretch girls’ slip pattern and instructions (actually a pattern I also have… I will have to check and see if it has its contents.) Fortunately, KS204 was tucked inside, too. There’s lots of room—it takes up about as much space as a couple of sheets of looselesaf.

It had been cut to size small, which was fine for me, at least about the hips. Around the waist, well, the pattern sizing is for a 25 1/5″ waist. I haven’t had one of those since I was 15. I added a bit, although it turned out it probably wasn’t necessary. Though the amount of ease seems about right throughout, so maybe it was a good idea.

The lace is (yet another) stretch-lace from my stash. It’s one I’ve been coddling for years, because I absolutely adore it—and after looking at lace pretty much non-stop for the last few weeks (ok, whenever I was sewing, which once you subtract work and a modicum of family time, is not much), I have to say I really, really, really like this motif even more than I thought I did. Anyway, I’d been thinking I was saving it for the hem of a cami or tee, but when I was digging around for lace for this project, I realized that the elastic is getting that feel. The one where you’re afraid to stretch it because it may not go back again. So I opted to use it for something where the elasticity isn’t key. (And, if it becomes completely misshapen and gross when the elastic dies, I’ve only wasted a few square feet of material. And at least this way I can enjoy it for a short while.) 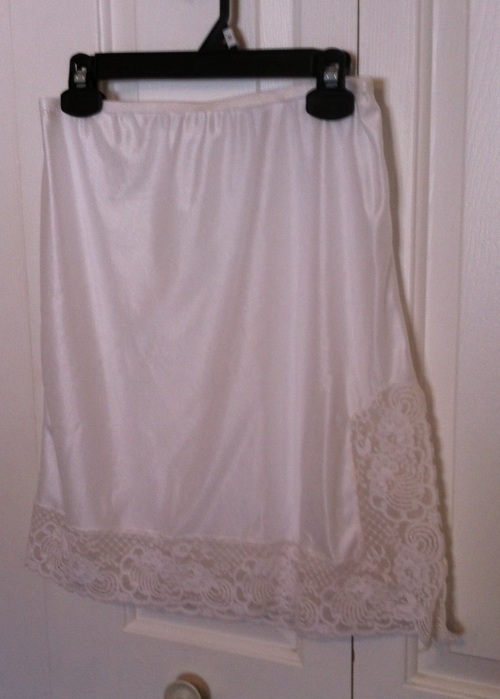 While there was not much to the pattern (one piece cut on the fold, identical for front and back), the instructions were nice to have, if only so I didn’t have to actually think about anything. I determined I had enough of the lace to surround the bottom and do a nice “slit” piece up the side; I spent probably more time arranging the lace to get the motifs to match up, as best they could (not being symmetrical) across the top of the slip. The pattern suggested cutting the lace; of course, I wanted to try and trim around my motifs. Which only sorta works since they aren’t symmetrical, but I think I managed to get close enough. Although the sharp, symmetrical top might’ve been more striking.

I have to admit, my first thought on trying it on was “…. eh.” Not exactly sexy. Give me a full slip any day. And it sits at my natural waist, which is never a good look for me. But I think it will have a place in my wardrobe, and once the clothes are on top the little hints of lace are as much fun as any regular slip.

14 responses to “A slip before breakfast”