Confessions of a (sewing) pusher

Kathleen of Little Hunting Creek is right. I feel like a pusher.

Recently, my Stylish Sister-in-Law finished her first ever sewing project.

Ok, I maybe helped a bit.

By, y’know, casually mentioning making this, or that, every time I’ve seen her since we moved back. And possibly by shoving my phone (with pattern-tracking app) in her face at every opportunity. You know how fun it is to dig through your patterns, virtually or otherwise? Well, it’s even more fun to do it with someone else. (Or two someones… I’m working on my other SIL, too, but she works full-time so it’s a slower process) Anyway, finally a week or two ago she cracked, and went through my entire pattern catalogue and presented me with the list of her choices.

Most of them were lovely sundressy things that, while they might or might not have been good beginner’s projects, are just heartache waiting to happen, as we perch here on the cusp of the Canadian winter.* I didn’t want her first project to languish unworn in a closet for six to ten months. So we negotiated, and she opted for the tunic version of New Look 6789.

This pattern, humorously, is the same pattern I helped my friend Trish make last summer. Which, I might add, I still haven’t made up for myself. /pout. Stylish has expressed interest in making up the skirt and maybe even the pants, as well… but we’ll cross that bridge when we come to it.

Stylish already had fabric, salvaged from a long-abandoned “old fashioned dress” project a family friend had apparently started for Stylish long and long ago, which has languished, half-draped and loosely basted, in a bag in Stylish’s storage. I’ve never draped anything, so I don’t want to comment on the quality or lack thereof, except that it’s pretty clear that it wasn’t anywhere near done.

Anyway, Stylish acquiesced to my tracing neuroses and traced the pattern all on her own. I took a back measurement to confirm my hunch that some waist-shortening would be in order, but otherwise had her trace a straight size twelve. We’re much the same size, but very different in shape, so I didn’t want to jump the gun on a bunch of alterations.

And then, I made her iron her sadly-crumpled fabric, quite possibly the first time she’s ironed anything in her life. She did it quite well, and may even have enjoyed herself.

The sewing itself was a joint effort, particularly since I elected to have her follow the pattern instructions and begin with the front princess seam. Was your first seam of all time a princess seam? Yeah, mine neither. I did the bust part and then let her do the rest of it (other than the zipper). The serger is at my MIL’s, so I made her finish the seam allowances with a triple-step zig-zag. I feel pretty mean for doing that; I don’t think I finished a seam in the first fifteen years I ever sewed. But it’s a pretty ravelly fabric. She’s most satisfyingly particular and precise in her sewing. It makes me pretty jealous, frankly. 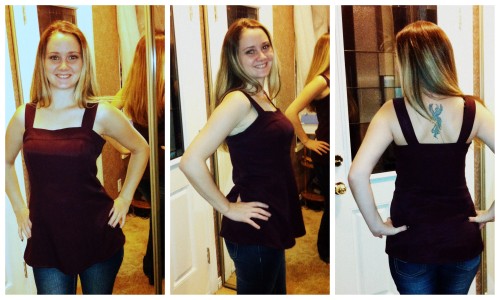 And, voila! Not perfection; it could use a little more shaping in the back, I think. (But then that might also cause more ripples and necessitate that swayback adjustment and stuff.) And the band gapes a bit and we should’ve placed the straps a little closer together for her narrow shoulders. But still pretty smart for a first try, I do think. I am grinning ear to ear every time I see her in it. And it’s not too hard to throw a sweater over, either, since it’s, um, not exactly sleeveless season here anymore.

And she wore it out to her birthday dinner tonight, so I’m pretty sure that counts as a win.

12 responses to “Confessions of a (sewing) pusher”