I still don’t have a sewing room (although there have been some signs of progress). It’s been an all-day-every-day job getting things even as close to “settled” as they are (it took me two weeks to find my eyeliner). The fact that half of our stuff is remaining in storage at least for the short term is not helping, either. But when I DO get it set up, what will I make? The season for the adorable sundresses I had been banging out has emphatically passed, and while there’s several fall-ish dresses I’ve had in mind, the lack of a closet I’m currently dealing with is making any clothing that needs to be hung distinctly less appealing than it was before. I could, of course, make a sweater or bunnyhug, but that would be like practical and stuff. I’ve bought a fair few thrift store patterns recently, in a ridiculous and counterproductive attempt to soothe the creative itch, but I’m not sure that any of them are absolutely screaming to be made. And I’m not quite willing to dive into the list of coats for winter without a bit of a warmup.

One thing that has been on my mind is the perennial, elusive, underwear. Underwear is kind of my unicorn—attempted several times, but always elusive, usually due to sloppiness on my part. There’s the failed, self-drafted pair I blogged here. Before that, there was a pair from this pattern:

Which didn’t work out either technically—wonky construction—or fit-wise (the rise was way too high). I’ve tried and failed at least one more time in the past, I think with this Burdastyle pattern:

Which was similarly disastrous, although I don’t remember exactly why. The odds are it was me, though, rather than the pattern.
Beyond these free patterns (I downloaded the Lekala one back when they had a free demo size that just happened to be more-or-less mine), I have a few possibilities in stash—I’m pretty sure that the differences between panties and bikini bottoms are in fabric and finishing rather than cut, so I’m including them here.

In the retro category  is this one: 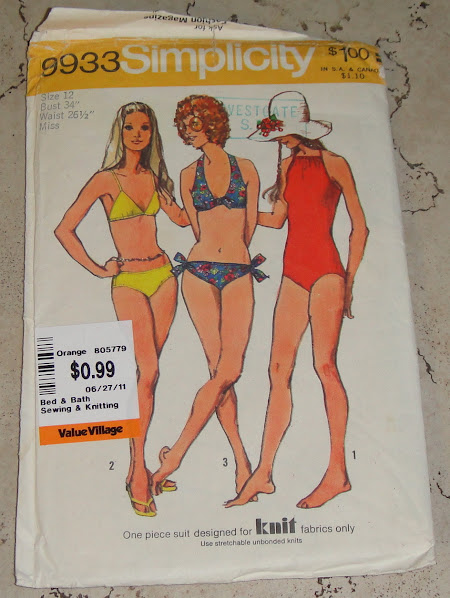 However, only the one-piece is designated “designed for knit fabrics only” which makes me rather scared of the two-piece bottoms.

Most recently, I found this Kwik Sew pattern. It has the advantage of several reviews on Pattern Review, although they’re not overly positive in terms of fit and sizing. (I’m a bit confused how you can rate a pattern “highly recommended” and then write that you had to go down two sizes and reduce the width of the crotch panel by an inch.) 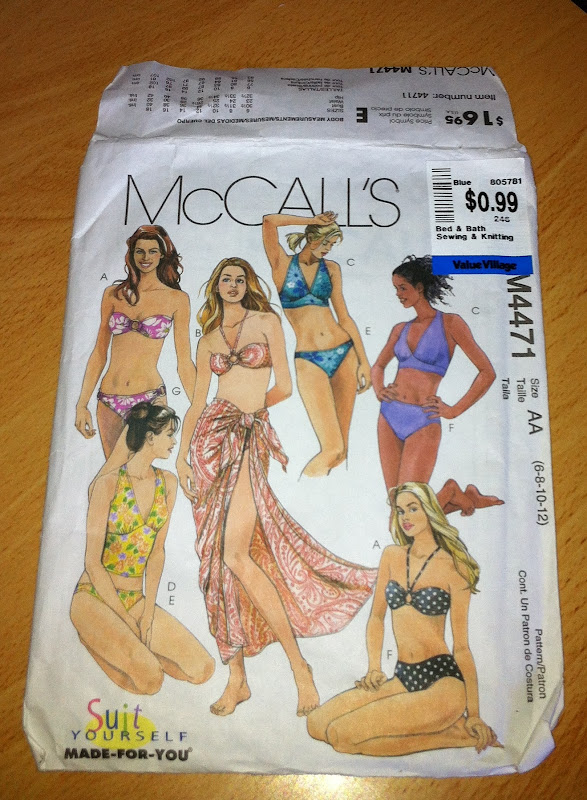 Possibly the best candidate would be this McCall’s pattern. There are several helpful reviews, and it’s the general bikini shape that is kind of my fall-back.

Of course, there’s no shortage of other underwear patterns, too. Aside from the old staple of tracing your favourite pair (I’m still not convinced my problem was the self-made pattern), there are several free options available:

This cheeky panties one is cute, though I think the finishing leaves a bit to be desired. I go back and forth on the whole cheeky panties thing. Same with the lace tanga panties. Sew You Said is in the midst of a series on drafting your own, as well.

If you want to pay for a pattern, a couple I’ve seen recommended are:

Jalie’s underwear pattern (does anyone ever say not-good things about Jalie?)

And several of the Kwik Sew lingerie patterns.

And I’ll throw in a link to the Ohhh, Lulu patterns for thoroughness, though I think I’ll be wearing high-waisted panties about three days after hell freezes over. No offense to everyone who loves them… just not my thing. And I’m so over thongs.

Oh, and there’s probably something that would work in the Merkwaerdigh line, which I also generally hear good things about, although more about the bras.

Which is not to say that I’m totally convinced that underwear is my next-up in things to make (and if I do it would probably be from one of the patterns I already have). But feel free to throw in your favourite pattern, and any technique tutorials you find super-helpful. Because apparently in this department I need all the help I can get. 🙂

Tagged as Fantasy Sewing, too much talk, undergarments