Moving stress + running errands our last day in Cow Town + 50% off sale at Value Village facilitated a bit of a splurge on vintage children’s patterns, I fear. How can you resist a bit of retail therapy for a quarter apiece?

The patterns range in size from 4 to 6X, and all seem to have been intended for wear by a girl named Carol Evans, who I presume was a vampire trapped eternally in a child’s body, since the patterns range in vintage from 50s through 70s. Or they might have been collected more recently by a mom-stitcher with a thing for vintage patterns, not unlike myself. But really, I think it’s the vampire thing. 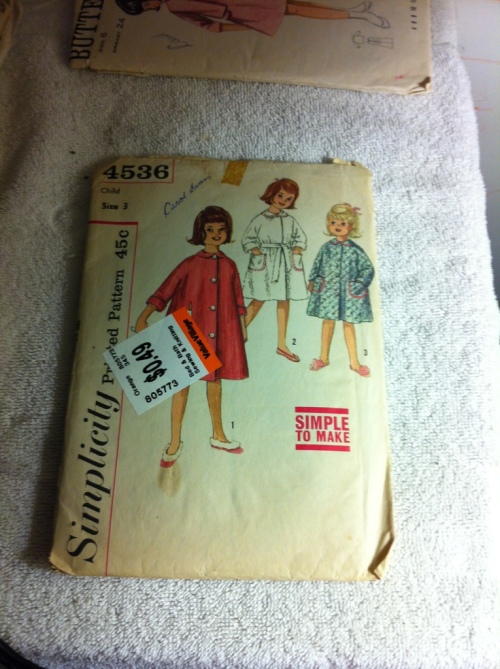 This fifties housecoat just may be the child’s version of this pattern, which Peter and Cathy rehabilitated so stunningly into an “Opera Coat.” I’m going to assume that our little vampire was at least as capable of turning something so drab and basic into something luxe and glamorous as Cathy is.

This might just be the quintessential fifties little girl dress. According to this website, it’s from 1954, as is the preceding housecoat. Also, I love the little capelet. Every vampire (child) needs a capelet. Not to mention plenty of variations on a dress, for when she gets blood on it. Also, those of you who did time in Vampire: The Masquerade, dig the black satin version with the rose. 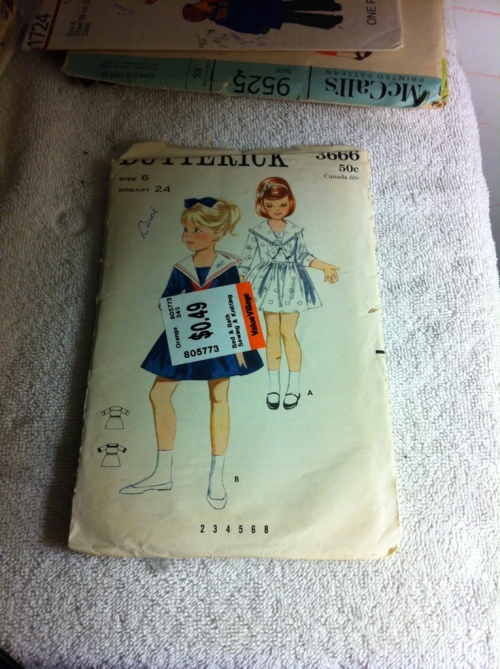 Something about the white version of this sweet little sailor dress just makes me squee. Presumably this had a similar effect on Carol Evans. Or possibly she ran away to sea to hide her lack of aging. You have to keep moving when you’re a vampire child.

Doesn’t this one looked sophisticated? I want to say very Jackie O, but I wasn’t around back then to observe and haven’t really researched, so you can correct me if necessary. Or maybe it’s Chanel. Doesn’t that little jacket need to be made of boucle, with a quilted lining and chain in the hem? Poor Carol has been size six for at least a decade, after all—she has to be feeling more grown-up inside than out. This is just the dress for when she wants to look like a miniature (and very chic) adult 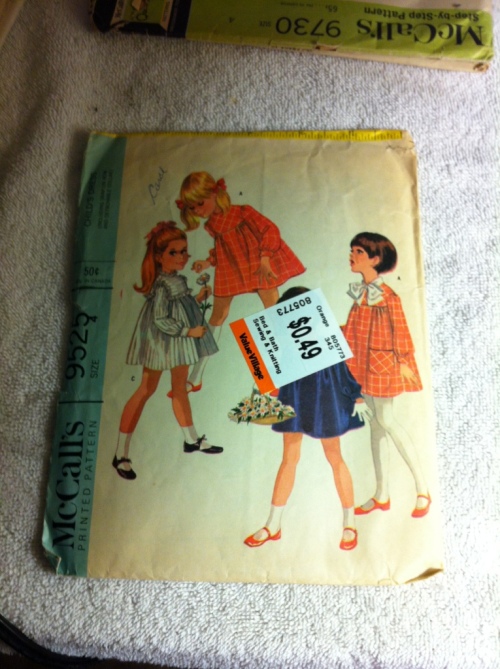 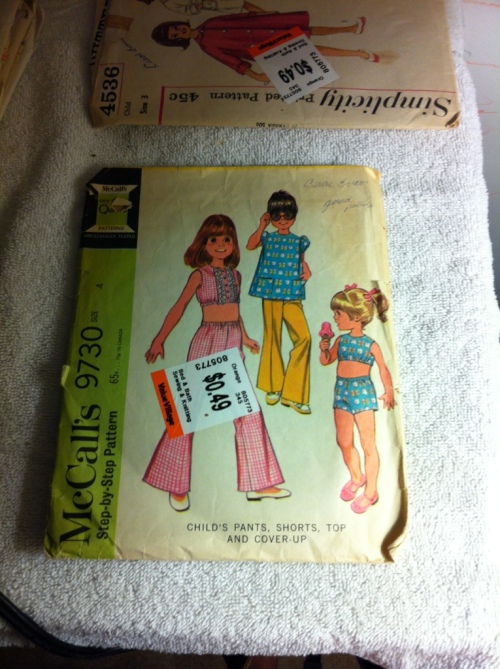 These two McCall’s patterns fascinate me, not so much for their contents as their style. I had instantly pegged the dress as sixties (based on the illustration style, the dress itself is such a classic I think with minor hem-length variations it would look at home in any decade since 1900. Possibly 1850.) The pants wardrobe, on the other hand, I had pegged as classic 70s. The fashions, the art, the bell-bottoms, the gingham. Then I checked the dates on both patterns. The 60s one is indeed earlier—1968. But the “70s” pattern is 1969. I kind of feel like I’ve captured the cusp of a decade in pattern form—a snapshot of the transition from one style regime to another. Especially since both are by the same company. As for Carol, well, they both obviously cater to her need to appear childlike and innocent to manipulate the adult humans around her. Can’t have anyone suspecting, after all.

The patterns go on (It appears later in the 70s Carol headed somewhere chilly and needed some serious winter gear) but I think I’ll leave it at that. Speculation on the life of Carol the vampire child welcome in the comments! 😉