I think this will probably be my last sundress for the summer. I’ve been making them kind of compulsively, but let’s face it, the Canadian summer is short. And this one is REALLY summery, not something like the Funnygrrl dress that can be warmed up with a shrug and tights. I mean, you could warm this up with a shrug and tights but it would look pretty silly. Really, this is not much more than beachwear. But considering the forecast right now, it’s purrrrrfect. 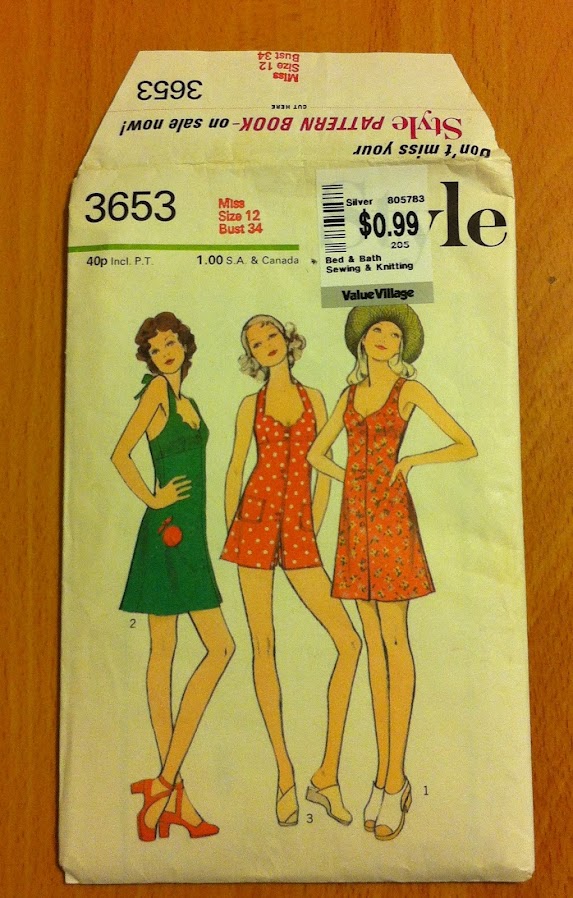 The pattern is Style 3653, all the way from 1972. I won’t lie to you, I fell hard for these bathing beauties whenever it was that I picked them up. What a gloriously young, summery pattern. Not the most practical of items, certainly, but delicious.

So I’m not sure if you’ve noticed, but I’ve been making a lot of woven dresses in the last several months. To the point where I’ve really been blowing through the portion of my stash (never terribly large) dedicated to light, summery dress-type fabrics. When I decided that this was going to be the next project, I confess I was a bit dismayed when it came to picking fabric. This pattern seems to call for something fairly crisp—yes, for once, quilting cotton would be perfect. Crisp, I did not seem to have. (Well, I have lots of broadcloth, but while that’s great for summer linings, not so much for fashion fabric.)

So I dithered, and tidied, and put stuff in boxes, and eventually settled on this pink linen. A little reluctantly, only because when I bought it (from the thrift store) it was in company with a luscious eggplant-purple knit that complemented it perfectly, and I’ve been envisioning  a top and skirt combination. Although, considering how often I wear skirts (even the ones I like), I’m likely to get more use out of the dress, frankly. Even if there’s only three days a year hot enough to wear it.

So, I have quite a few Style patterns, but I think this may be the first one I’ve actually made up. What a crime! Anyway, I didn’t think I’d have too much trouble with it, but I whipped up a quick bodice muslin just to see if things were in the right ball park. Well, they were, except—um, ease, people? There was not much. Interestingly, I didn’t actually need to shorten the shoulder straps. This might be a first. I didn’t want to bother muslining a skirt, so I pulled out the pattern pieces from Simpicity 5549, which has a similar narrow A-line skirt and dart shaping, at least in the back, and used them for comparison. I basically determined that yes, the same alterations I always do would be in order, and, y’know what, although the Style dress is drafted without a back seam (butting in the front as it does), I really wanted a back seam. I really, really, really liked the smooth back-and-butt fit I got in the Funnygrrl Dress, and I just didn’t want to sacrifice that. I also added a bit of width to the hip in the back piece, just widening the flare of the A-line, again based on comparison with the other pattern. Apparently, I have booty. I know, it’s news to me, too.

The only other alteration I made was to use a separate facing for the lower part of the button placket on the front, rather than the cut-on placket the pattern suggests. This was solely because I wanted to use piping (I may have a Problem).

Now, this linen is soft. When they talk about soft, wrinkly linen, this is what they mean. I’m kinda glad I didn’t try and turn it into a crisp officy pencil skirt, actually. It would’ve been wrong. This is the sort of fabric that wants to be a slouchy beach caftan.

So, interfacing. I stayed all the edges of the bodice with interfacing strips (like I did here), and interfaced my button placket/facing pieces for the skirt. I tried really hard to give my fabric the structure it needed (well, everything short of block fusing, anyway.) You know how they say you should match your interfacing to the fabric? Well, I must have succeeded because the whole thing still looks soft and schlubby. Ah, well. On the muslin, there was a bit of gaping in front of the arm. I forgot to take a tuck in the pattern to try to fix it, so when it got to the interfacing (and then the piping), I stretched the interfacing a bit while going over this area. This seems to have done the trick—the fabric’s rumply, but not any worse than it is anywhere else along the piping, and there is no gaping, unlike my last dress. Win.

Then I started working on the pockets. Generally I avoid patch pockets except on jeans—they’re just not a detail I care for—but I really like having pockets and there was no way inseam pockets were going to work on this dress. As per usual, I traced the seam-lines onto some cardboard cereal box, and began cutting it out to make a template for pressing them.

On my cutting table.

Where the front skirt-piece was still laid out.

And since you have to cut pretty hard to cut cardboard, it’s easy to miss the difference in feel caused by the two layers of fabric being caught by the scissors, too.

And then I post anguished pictures like this one, about how I cut a 4cm slice in BOTH FRONT SKIRTS and no way is there enough fabric to cut a new one.

And then I wound up not even using the pockets, because everytime you look at this linen it shifts into a different shape and I couldn’t get them to stay in shape even long enough to press properly. Some starch might’ve been in order, but I was already pissed with the pockets.

So, back to that slice in the front. I cogitated. I considered. I  contemplated.

And then I decided, since I had already planned the separate facing for the button placket, why not put it on the outside, and pipe the snot out of it? 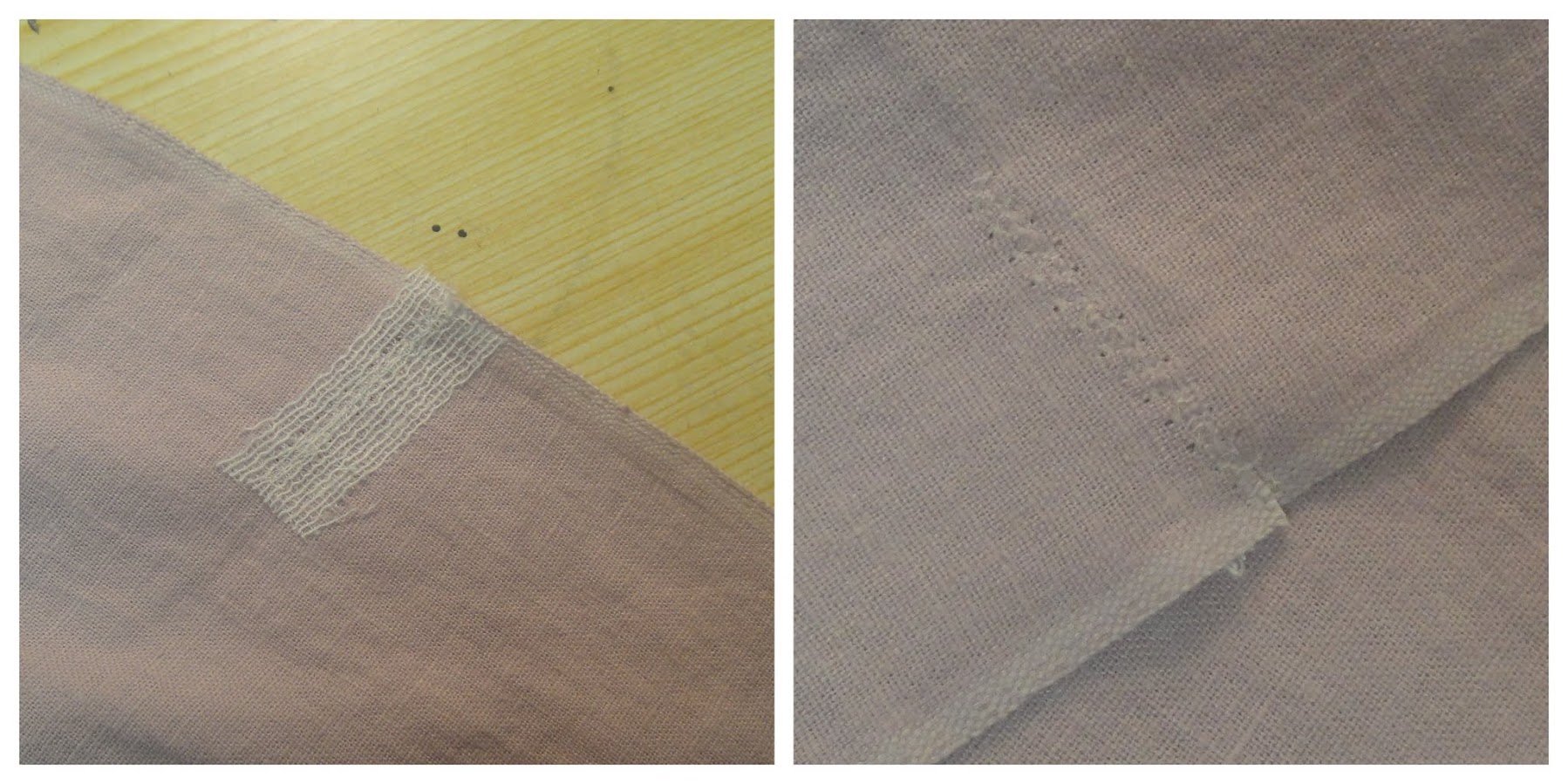 So, to repair the slices, I fused a small bit of interfacings to right side of the fabric, then reinforced by darning with a triple-step zig-zag stitch. This made for a fairly neat, unobtrusive repair, something I was fine with for the inside of the garment, but would not have been happy with on the outside. It would’ve been more invisible, of course, if I’d had thread to match my fabric, but since when do I do that? Ninety percent of my projects are fine with black, white, off white, or red, so I must admit my selection of colours outside that is pretty limited other than a couple of shades of blue. And the piped facing/placket would cover the unsightly interfacing on the exterior of the dress.

Needless to say, I felt kinda triumphant. Then I had to figure out how to attach everything. 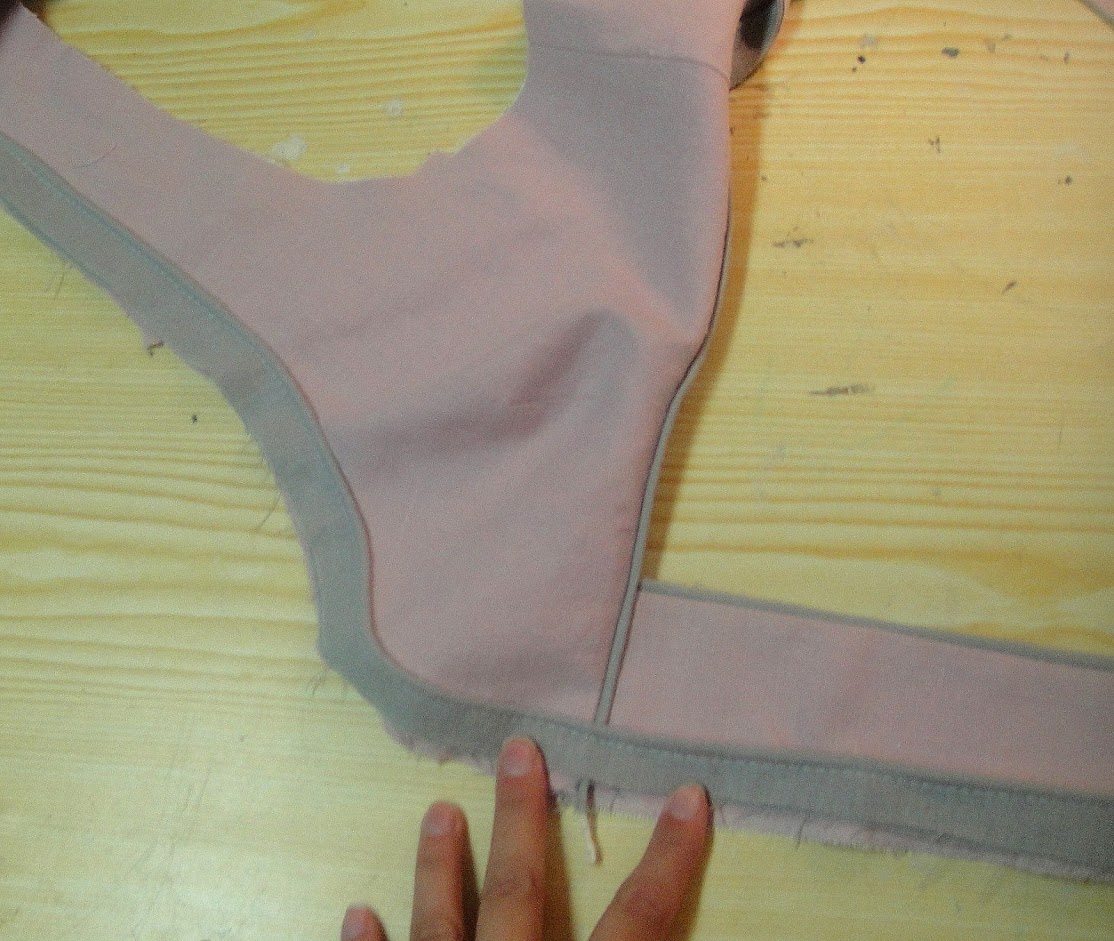 Attaching the placket on the outside.

It would’ve been simplest to just stitch the placket to the front of the skirt and then attach the skirt (with placket) to the bodice. But then I wouldn’t’ve been able to have a continuous line of piping running down the front of the dress. So instead, after a little bit of brain-busting, I figured it out: attach the placket strips to the exterior of the bodice (after piping the bottom of the bodice), and attach the skirt to the lining of the bodice. Then stitch the edges, and topstitch the bottom of the bodice and the inside of the placket down after. Hmm, does that make any sense? I took photos. Y’know, just in case anyone else ever does something this boneheaded and needs a recovery strategy. Design feature. Thingy. Key point: the bodice lining and the skirt go together right side to wrong side, because in the end they end up facing different directions. Like I said, brain busting 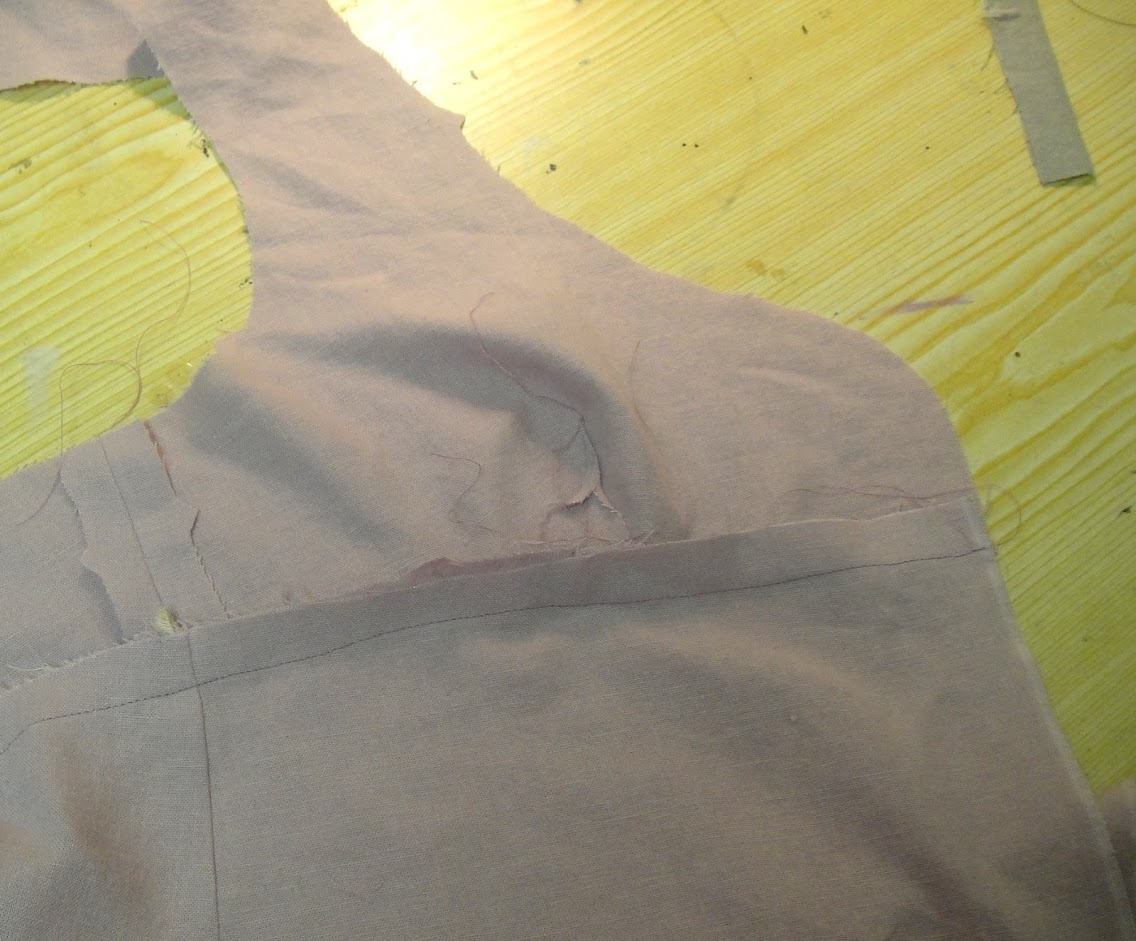 Attaching skirt to bodice lining, right side to wrong.

To my astonishment, it worked. And finally, after all that work, I could try it on!

The darts. The darts, my children.

I’ve been trying to work on my darts the last few dresses. Since my complaints back on the Star Wars Dress, I’ve been tapering and tweaking the tips a little more subtly, and while I haven’t achieved perfection, I’m getting a lot better. So I’m going to blame this on the soft and stretchy and shifty linen. As soon as I tried to try on the dress, the darts sagged in soft, rumply puddles under my breasts. Argh. Part of the problem seemed to be that the lining was tighter than outer fabric (not sure how that happened…), so I picked out the stitching on the lining darts (this is why they sometimes tell you to sew tucks in a lining instead of darts). This helped a little bit, and pressing aggressively over my tailor’s ham helped a bit more, but they’re still rumply. However, with the addition of the buttons and my little bra, it’s looking much better, so I don’t think the horror will keep me from wearing it.

One of the cutest features of this pattern, although you have to look close to notice it, is that the buttons are arranged in pairs. So cute! However, I knew that with the snugness and softness of the dress on me (not to mention the amount of tension I was going to need to keep the darts smooth-ish), that little button pairs with three-inch gaps between them were not going to work. So instead of eight buttons in four pairs, I used twelve buttons in six. Yes, it was a lot of buttons to make holes for. And there’s still a little schlubbiness between the pairs. But I think it works (or I like to think it works), and hopefully the groupings are still distinct enough to look intentional, not just sloppy.

I used the longer of the two lengths; it’s still pretty short. So here’s the thing. I’m not averse to showing my legs. I like my legs, and I like to show them off. But I am averse to showing my underwear, and I’m particularly averse to wearing clothing where I spend all my time worrying about whether I’m showing my underwear. Which, I’ve discovered through almost two decades of trial and error at this point, is any skirt shorter than just above my knee. Unless it’s a skort, in which case, bring on the minis. This is, obviously, not a skort, nor do I have enough fabric to make the matching shorty-shorts for underneath even if I wanted to. So we’ll see. It may drive me nuts.

I’m also not convinced this rather cool pink is the best kind of colour for me, but it’s still pretty.

35 responses to “The Last Sundress”