And now for something completely different.

I am a busy woman. I have made promises.

And I have been reminded of them. 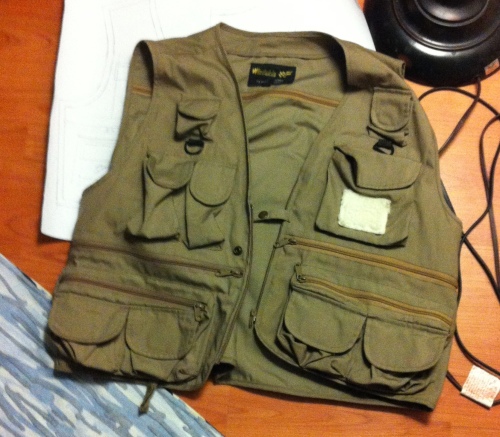 Namely, I said (oh, back in April) that I’d make my kids fishing vests.

Yes, fishing vests. Those things with all the zillion cargo pockets. No, I wasn’t thinking it through. On the other hand, the kids’ ones are insanely expensive.

So last night, rather than working on yet another dress, I hunted through the box of kids’ patterns and eventually settled on the vest from this one. It’s a size 8, so technically it will either be big on Syo or small on Tyo. I’m vaguely hopeful it’ll fit both*. We’ll see. 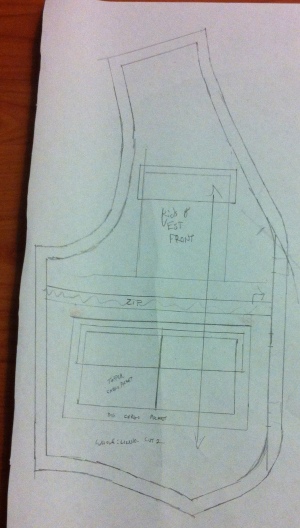 I traced out the pattern along the stitching lines (hooray for one-size patterns!) and started laying out my extras: zipper inserts, pockets, bits and bobs. Then I traced all the individual pieces separately, added seam-allowances, and tried not to flake out about which pieces I need to cut two, four, or eight times. Fabric of choice (at least for this version) is a lightweight not-actually-camo-print twill originally purchased to replace these capris of Tyo’s. Hopefully I’ll have enough for the vest and the capris, because heaven and earth will tremble if I don’t. Before I start assembly I need to pick up a few more zippers (my plan calls for five or six, depending on whether I can locate 6″ separating zippers) and maybe some other fun bits of hardware—a few D-rings, at any rate. I have also written myself out a construction order, otherwise I’ll never remember things like adding velcro to the pocket flaps.

The drafting actually went pretty quickly. We’ll see how I do with the actual construction.

*I should point out here than until Tyo’s recent, um, developments, she and Syo had almost the same ribcage measurement. Tyo is three years older and plenty taller, but she takes after the pear-shapes in her father’s family, with a narrow ribcage. Syo, on the other hand, is leaning towards my kind of broad-shouldered shape.

11 responses to “And now for something completely different.”