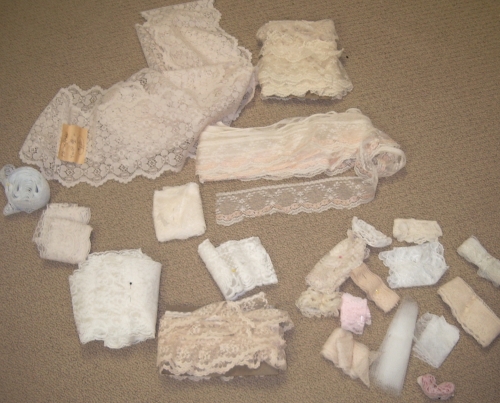 It’s probably Sherry’s fault, posting that Ruby Slip pattern and then hosting the sewalong with all those yummy tips on sewing with lace. Filling my nightime fantasies with dreams of guipure and silk habotai…

Yeah, let’s go with that.

It might also be that pickings at my local thrift store have been slim lately. (Except for sewing machines. There’s been lots of those. But I binged out over Christmas. It’s going to have to be something REALLY special before I bring home another one. I promise.) Maybe I’m desperate.

Whatever the reason, last time I stopped by, they had bags of lace. Bags and bags of it. I resisted. I only brought home two.

I have kind of a love-hate relationship with lace. Similar to how I feel about 70s fashions, actually. The best is heavenly, ringing bells for elegance, texture, luxury—all kinds of things I love.

But a lot of it, especially of what’s in my price range, is, quite frankly, meh. And some of it’s truly, abhorrently awful.

And I have to say, a fair bit of this haul is in the latter two categories.

There’s one piece that’s quite wide. (Maybe wide enough that I could do a practice Ruby with just some piecing? Or three. There’s like four metres of it.) Unfortunately, it’s nasty-70s/80s-polyester-awful, and doesn’t even have a nice pattern, either. The next widest stuff is stretch lace. Sherry recommends against that for the Ruby (even if it were wide enough), but maybe there’s cheeky panty possibilities? At any rate, it’s quite pretty. (I tried to take a closeup but it didn’t work out and I’m too lazy to re-take.)

There’s another, 3″ wide stretch lace that I could see using as a band at the hem of a T-shirt or something.

Strictly for looks, this one’s my favourite. I love the delicacy and the little silvery threads. I have absolutely no idea what I’d do with it.

This one with the bit of pink is also pretty neat. And there’s quite a lot. What for? What for?

And then, there’s the bits. Why did anyone even save these? (Oh yeah, they’re a scrap hoarder like me. :P)

Ok, I might have an idea. It’s twee. Possibly cavity-inducing. 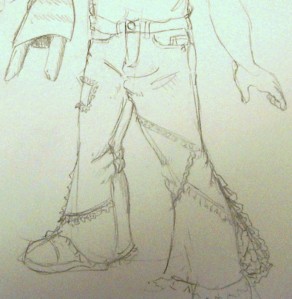 Good thing I have a ready supply of little girls. Although I’m not even going to try this until I have at least one more good pair for me, dammit.

Maybe lace on the pockets, too?