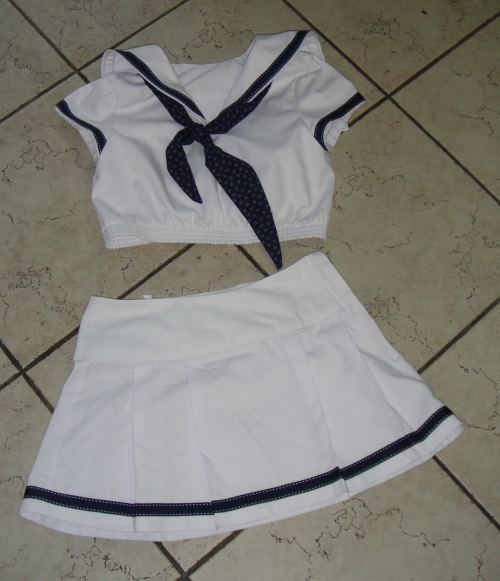 Botch job? That might make more sense. I think my spelling muscles have atrophied from years of spellcheck.

(Editor’s note: what follows is a really whiny, ranty post, heavy on the pet-peeves and largely self-created irritations. Despite the overall tone, it was really nice to spend a good chunk of time sewing—I haven’t had much time lately. But feel free to skip to something a little more cheery)

Hallowe’en sewing has been happening.

In theory, I should love Hallowe’en sewing. I love the holiday, the decorations, the costumes, everything. I love costumes in general, for pity’s sake. There’s just something about the thought of “worn only once” that I can’t shake out of my head, and it trickles down to crappy sewing. The overall look I’m happy with. The details suck balls. 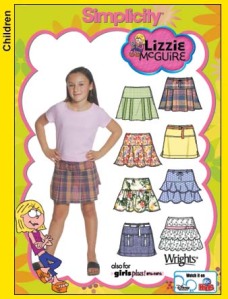 Let’s start with the skirt, since that’s where I started, too. The pattern is Simplicity 5084, a Lizzie McGuire pattern for a skirt in about a bajillion different options; View A was pretty much what I was going for, though. The package is for kids’ sizes 8-16, but whatever lovely soul owned it before me (and I shouldn’t complain too much since I paid less than a dollar for it, but it’s my blog and I’ll whine if I want to) cut it to the size 10. And then helpfully stuffed the cutoff little strips back in the envelope. I know I should be grateful for that, but I have to admit I find it even more irritating than just having a cut pattern set to that size in the first place. This is not terribly rational of me, I know. And ten is, technically, Tyo’s bottom-half size, so it wasn’t the end of the world.

This is not, however, the end of my irritations with the pattern. The next one comes from the drafting—there’s an identical yoke piece for front and back. Now, in my experience even children without Tyo’s particularly J-Lo-esque figures have a different shaped bottom than front. This kind of dumbed-down pattern drafting always annoys me. I traced out another version, keeping the waist the same but spreading the bottom to give it a little more room. I even managed to remember to add extra width to the pleated skirt piece when I cut it out. The fabric is a lightweight cotton denim, sturdy and nice to work with. 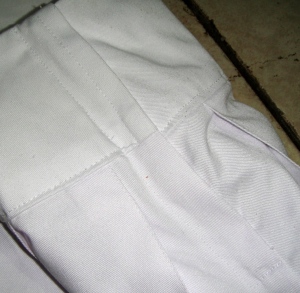 The next set of complaints are purely user error and failure-to-think-things through. I did a reasonably-successful blindstitch hem on the machine, but in hindsight I could totally have used the navy ribbon we got for trim to hide the hem—and then the ribbon would’ve been on BEFORE I topstitched the edges of the pleats down, rather than only trying to put it on after (which was really, really dumb. I think I was in Trim Denial.). Then I figured I’d try a lapped zipper. I followed the instructions from one of my vintage zippers, and basically it’s the 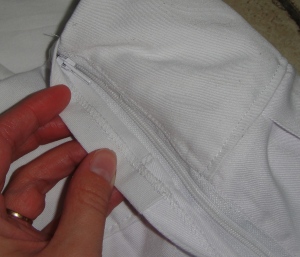 Lining creating weird pocket with the lapped zipper. I are speshul.

same idea as a jeans fly, except on a much narrower scale. I think it was the narrowness that befuddled me—anyway, results were not so good. Laughable, really. Although it works fine, it just isn’t pretty or well-finished. And then I couldn’t quite wrap my head around putting in the lining for the yoke, and managed to create some weird things like a part that folds over the top of the zipper. Ah, well. Costume-grade, sigh. I should’ve just put the lining in first. I should’ve done a lot of things differently, really. Live and learn, etc. The pleats didn’t come out even, either, even though I marked them off the pattern with remarkable (for me) precision.

Overall, though, it worked out. I’m very glad I added the extra width in the back. I also wound up scooping down the top of the front yoke a bit and letting out the yoke side-seams, which may have contribued to throwing off the pleats. 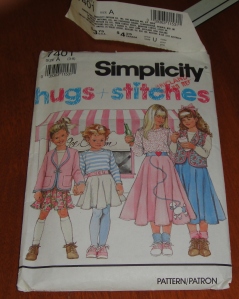 The top needed to be a basic, short-sleeved, cropped top with a sailor collar. I figured pullover-the-head with elastic at the bottom. I have no idea how the tight-fitted movie version of the costume opens, but pull-over is good enough for Hallowe’en. Digging through the stash produced Simplicity 7401, which has a very basic top. My package goes up to size 8, which is technically Tyo’s upper-body size. So, whee! I traced it off, roughly measured to the length Tyo wanted, just above her belly-button—she informed me that the shorter original was too short. I’m not sure where she picked this modesty up from (especially as she’s going to be wearing a leotard, AT LEAST, underneath) but, well, I’m not going to complain. Syo doesn’t suffer from it in the least, I’ll add. 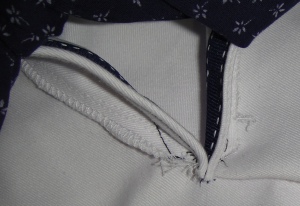 Anyway, modifying to a V-neck (making sure it would be large enough to pull over the head) wasn’t too tough, nor was drafting a collar to match. Figuring out how to finish the collar—now that kinda broke my brain. A facing would probably have been a good idea, but I was lazy and just wanted to hide the seam on the outside under the collar. It worked great except for the bit at the V right in the front. I’ve never done a sailor collar before—I imagine there’s a trick to finishing the front. I could probably even have learned it if I’d bothered to do ten seconds of research. I didn’t. So it’s a bit, erm, rough. There may be some fray-check involved.

The sleeve cap-ease seemed weirdly distributed, although in hindsight that’s probably because the shoulders are supposed to have button-overlaps and I forgot to remove the extra length on the back piece.  Which is probably throwing something really off somewhere, although I think it looks fine. Teehee-whoops. Either way, there’s a fair bit of ease and denim doesn’t do ease, so I didn’t even try. There’s some weird gathering and pleating going on in the shoulders. Costume.

I did think to use my navy trim to cover the hems for the sleeves—nice, clean finish. This mock-grosgrain ribbon doesn’t go around curves as nicely as real grosgrain, but with the running stitch decoration you can tighten up the inner side and make it curve fairly nicely, which I do like.

It was determined that Tyo could, in fact, slip the thing on and off over her head, although it takes a bit of wriggling. Maybe I need to check her measurements again, although I measured her only a few weeks back. In particular, the arms seem tight. Ah, well.

Then, I decided to stitch the elastic at the bottom to the fabric, the same method Peter covers in his boxers sewalong. I’ve been meaning to try this for a while, and figured it was as good a place to try as any.

Erm, so this technique probably works really well with light, thin fabrics, the kind you might used for boxers. With denim, not so much. I mean it looks fine. It’s just that the elastic, which was snugly comfortable around Tyo’s ribcage when I measured it, now doesn’t pull in nearly enough, because of the thicker denim. And unlike a plain elastic casing, it’s a PITA to fix. I tried ironing with lots of steam to tighten it up (as sometimes help with shirring) and that produced a small improvement. Next step may be soaking and throwing in the dryer.

The last bit of the costume (aside from accessories like a gun with charms hanging from it and two katanas) is a neck-tie which goes under the collar and ties at the front and, mercifully, covers my nasty collar finish where it shows at the front. Yay! Even better, this  light-weight navy cotton with a little white flower-print was in stash, from the stuff my grandma gave me last summer. Even even better, there was a long, narrow, folded bit hanging off one end of the remnant that, when snipped off, was perfect for being finished into this long, narrow tie. Yay! 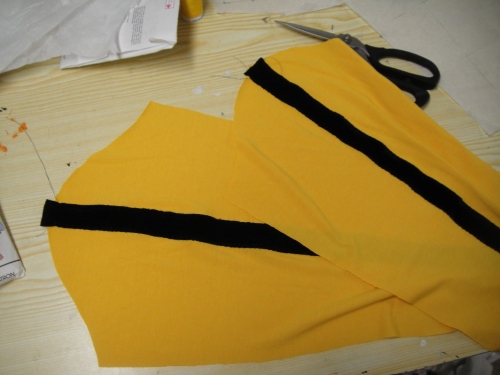 Next up: Syo’s costume. Buffy the Vampire Slayer, as cheerleader. So far, I have the sleeves! (The “black” stripe is actually blue stretch velvet I have lying around. If I get ambitious, she may even get a leotard out of it.)