Yes, folks, that time of year is upon us. If my kids weren’t vibrating at supersonic levels with anticipation, Joy’s efficiency in this area would have gotten me thinking about it. (Ok to my relief part of her “efficiency” is Ren Faire coming up…)

The thing is, I HATE sewing Hallowe’en costumes.

Frankly, my motivation to sew anything that’s going to be used just once is pretty much nil. Costumes, which generally need to fabulous in their details to be impressive, are among the worst of these (dance costumes, which are usable over and over again, are a whole nother story). Wedding gowns, similarly uninspiring. Although I might consider making my own wedding gown, if I ever decide to have a wedding.

The idea of paying thirty or forty or fifty bucks for an off-the-rack costume that looks like crap, is constructed like crap, out of crap materials, KILLS MY SOUL.

So, although we bought various costume props the other day, I just couldn’t bring myself to buy any actual costumes. It looks like I’m going to be sewing them, again.

It probably won’t save me any money, but at least I won’t feel quite so awful about flushing money down the drain.

In any case, the kids have made their choices. And they’d better stick with it, darnit. 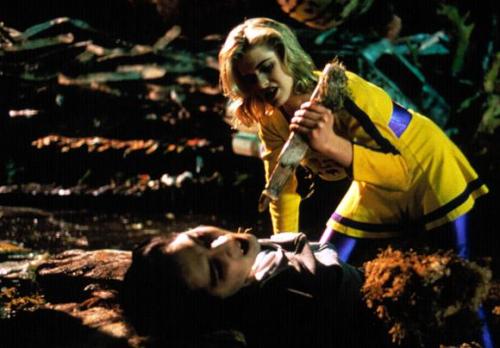 Buffy (from the movie)

Syo wants to be Buffy the Vampire Slayer. This is great, except that her image of Buffy comes primarily from the TV show, which means aside from a blonde wig and a stake she could wear nearly anything. Which on the one hand is great—street clothes, weather appropriate!—but on the other hand hardly counts as costume. So I think I convinced her (a la original Buffy movie) that a cheerleader costume is necessary to go with the stake. Now I need to make a cheerleader costume. Except she’s already picked out a cute (but not very cheerleader-esque) skirt. So I may be stymied. Grum. Anyway, it appears that some yellow, and possibly blue, spandex is in order. >_<

Tyo, on the other hand, kept morphing. We started with Ninja (great except for the whole black part). I was lobbying for “White Ninja”, and thought I had her convinced, but then she started talking about a schoolgirl/ninja look that seemed to be lifted directly from Sucker Punch’s Babydoll (have I mentioned how many times this film has been watched at our house?). Sure enough, when asked directly, she guiltily confessed, and now I’m wondering why she felt the need to dance around it. Adolescents are weird.

Hmm, kinda notice that aside from the colour-scheme and weapons, these are basically the same costume? And they’re both going to be really fun to make weather-appropriate (I’m not even going to go into age-appropriate. While I sort-of-generally agree that our preteens should not be going around looking like utter tramps, the whole “modesty” subject makes me twitchy and want to throw things.) On the other hand, they won’t be any worse than the Betty-Boop and Ballerina Witch of a few years back, and the Hallowe’ens here have not usually been that bad. (Cue curmudgeonly rant: Kids these days! No idea of what Hallowe’en USED to be like! When I was a kid it was ALWAYS snowy on Hallowe’en! I remember trick-or-treating in a blizzard, darnit! And we carried our own bags of candy, too, block after block! Daddy didn’t bring a wagon for us to empty our bags into when they got heavy! And…)

Grr. Anyway, I need to go buy fabric. I’ve been trying so hard to be good, too. But something white (I’m thinking twill) and some yellow spandex appear to be in order. And maybe a mile or two of glittery trim. /sigh.

Oh, and Tyo informs me Babydoll’s gun has charms hanging from it.

Tagged as For Syo, For Tyo, Hallowe'en, kids' clothes, kids' clothing, too much talk, whining