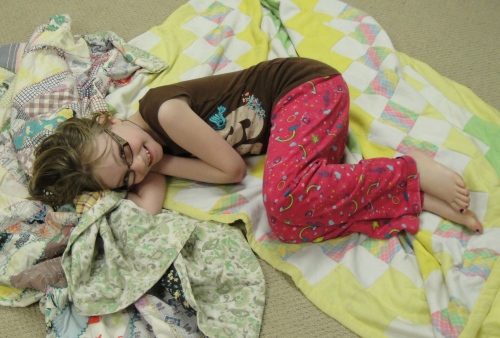 Quilts from my Grandma

My father’s mother was the family quilter. I’ve mentioned my quilt before, and I believe she was also the source of the homemade christmas undies I used to get each year (my mother frequently received a matching pair). I am sad to say I was not particularly thrilled by these (not by the homemade factor, but by the slippery satiny tricot used), and when I was eight or nine finally managed to express this to my mother. The flow of home-made undies stopped—just in time for me to decide I did actually like satiny underthings after all. Kids, I tell ya.

A few years back, grandma moved from the farm to a little one-bedroom in a seniors’ complex in town. As she was giving away a good number of things, I held my breath hoping for something sewing-related, but alas received only a few photos and knicknacks. Her little cabinet sewing machine still sits in her new bedroom, with a small chair in front of it, ready to be opened out of the cabinet should the need arise. I do wonder where the cutting mat and rotary cutter got to—I suspect one of my aunts nabbed them.

Anyway, apparently Grandma has gotten wind of my sewing exploits, because this summer she decided to send me a few small bags of old stash. Being quilter’s stash, it’s a bit different from my usual sorts. A lot of small pieces, which will be perfect for pocket linings and waistband facings, although I’m a little terrified to wash them and have them half-ravel away, some are so small. My grandma predates the concept of quilter’s cotton—most of these are poly-cotton blends if not pure polyester; they have the softness and drape of a lettuce leaf. But I have never been one to look free fabric in the drape. 😉

There are a few larger pieces—some flannel with a cute bear print, intended, no doubt, for the back of a girl’s quilt; a medium-sized piece of red and white check that wants to be a tablecloth for picnics. And, the oddest prize of them all, two pieces that appear to be intended for pillowcases, with large prints from the 80s movie Black Hole.

Now, personally I didn’t care for the movie when I first saw it and don’t like it much better now that it doesn’t completely terrify the crap out of me, but my husband, on the other hand, has quite the soft spot for it. So Black Hole pillowcases he will have.

They’ll go with the Transformers pillowcase  that recently emerged from a box of stuff I had abandoned at my father’s. I assume it must have been admixed from my brother’s stuff (also abandoned at my father’s), although I have no idea where he would’ve gotten a Transformers pillowcase. We’re the right age, but my mother was not the kind  to buy her kids themed bedsheets.

I know this fabric!

I don’t know how old most of this fabric is, but there is one piece I recognized. As a very small child I had a home-made (not by me) barbie cowgirl outfit—blue denim skirt and vest, blue-flowered blouse. And the blouse was made of this exact fabric. I had always sort of assumed my mom made that outfit, but maybe it was from Grandma. Or maybe my mom passed the fabric on to Grandma after. Or… who knows. One of the scraps here looks to be a rather shapeless sleeve that was cut but never stitched up into a garment…

Ok, I admit it, I’m pretty stoked about those Black Hole pillowcases, too.

Tagged as fabric, too much talk, vintage

7 responses to “My Grandma’s Stash”