So, now we’re home, it should be back to life as usual, right?

Erm. Not quite yet.

You see, memory is a finicky thing. Much as we swear that we’ll never forget the little things, they still get fuzzy as the years go by. I no longer remember which of my children was born at 4:00 am vs. 6:00 am.  I don’t remember whether Syo walked at nine months or ten (either way, it was far too early…)

And I didn’t remember quite what it was like to have pre-schoolers in the house. So when my stylish sister-in-law asked if we could watch her girls (yes, the ones I occasionally sew for, currently aged 4.5 and 3) for a couple of days while she and her hubby take their first-ever post-child vacation, I blithely said yes. She took my kids all freakin’ July, people. It was the least I could do. Especially since we shanghaied my father-in-law to provide “childcare” for us for the rest of August.

So, yeah. I have a serious infestation of pre-schoolers. And while they’re both past the everything-goes-in-the-mouth-first stage, there’s such a lot of, well, chaos. Syo, freshly turned eight, can whip up a jug of orange-juice from concentrate without me having to do more than wipe the counter after. Syo assisted by the three-year-old niece gets orange goop all over said counter, floor, stack of mail, and the orange-juice has bran flakes in it when finished. And they don’t know that the sewing room is a no-play zone. Same with the furnace room. Same with—ARGH! WHAT DO YOU MEAN YOU NEED YOUR BUM WIPED? WOULD YOU JUST GO PLAY OUTSIDE NOW? NO, WE DON’T HAVE A PADDLING POOL! WHY ARE YOU CRYING NOW????

So I’m feeling just a wee bit like I’m running around like a chicken with my head cut off. >_<

On the plus side, I did retrieve my Janome from the sewing-machine hospital, and she seems to be working again—at least, the flywheel turns freely and there was a nice little piece of fabric decorated with some gorgeous stitching stuffed under the needle when I picked it up. I haven’t had a chance to actually set her up and give her a run (see previous paragraph).

So instead I’ll show you a couple of glimpses of stuff that was in-progress when I left, lo these many moons ago. Ok, two weeks back. That’s, like, forever in internetland, people.

Of course, there’s Serena’s jacket. I really need to get cracking on this one.  But doesn’t the cuff look nice? I should’ve used more interfacing, though. When in doubt, add more interfacing. Ah, well. 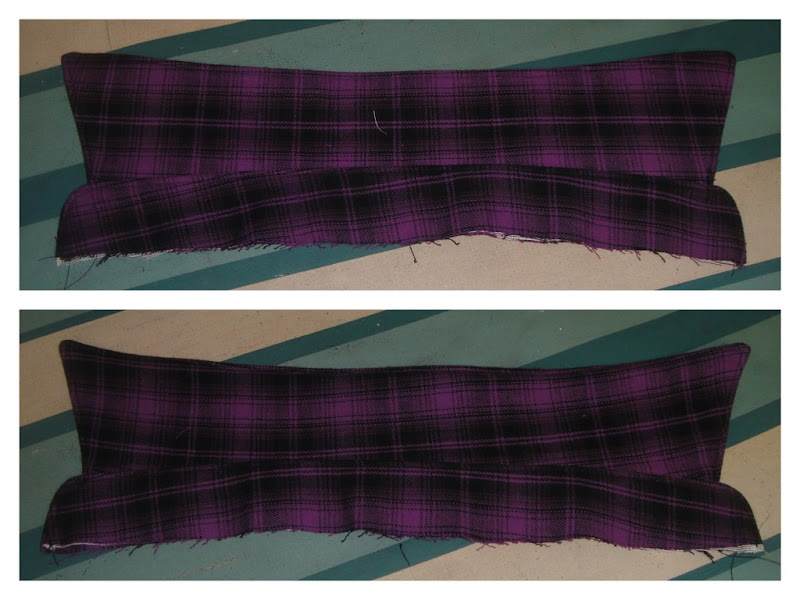 And there’s Tyo’s shirt. Here’s my nice collar. I had to show you both sides so you could see how (not) awesome my stripes are. I managed to cut one of each piece on-grain. Obviously this is one of those situations where you (I) should cut your pieces individually. Or match the freakin’ plaid. Either of which I was too rushed  to do. However I did swing it so that the nice-looking side of the collar will fold out over the nice-looking side of the stand, which is why they’re on opposite sides in this flat view. Having just tried it around her neck, I may have to junk the whole thing and cut out another anyway, as this one’s going to be a bit snug. Perils of using a pattern that’s technically too small even if it is the right chest measurement.

I’m pretty happy with how the back is looking, though.

Hmm, have I even mentioned this shirt properly?

Tyo wanted a shirt. Way back before she went on vacation. She picked out the fabric back in the spring, and then found a pattern (7171) off the Lekala site. Their sample size is for a child of 120 cm height, which Tyo is far beyond, but the chest measurements were the same, so I went for it (with considerable lengthening of the sleeve). As I mentioned, the collar is small, so I may end up regretting that.

Technical drawing of the pattern

As you can see, instead of buttons, I’ve opted for loops of elastic on each side, which will be threaded with black velvet ribbon. Because everyone loves lacing, don’t they? You can also see my clever use of bias to avoid all semblance of having to match my plaid. Except at the side-seams, but I wasn’t even thinking about that. Figuring out how to finish the seam where the little loops are inserted was a little, ah, mind-expanding. There was seam-ripping, and possibly even a little swearing. I wound up basically doing a

You can perhaps see how I flared out the bottom of the side-back and centre-back pieces a little bit. This will hopefully accomodate Tyo’s generous derriere. I’m a touch stalled because I need to go back over the Men’s Shirt Sewalong before I get much further, to do the cuffs and plackets.

And I don’t multitask well (at sewing or at anything else) so I really need to just hunker down and finish Serena’s coat. Before I do anything else.

I want to make my Lonsdale…

EDIT: Just got a call from the MIL that Niece #1’s tests just came back positive for strep. And Syo is already showing the same symptoms she had… Life just keeps getting better. >_<