Remember how WAY BACK in March I promised my friend Serena I’d make her up a showy tailcoat to wear for a photo shoot and (hopefully someday) performances? Well, I’m a champion procrastinator. You may not know this only because sewing is generally what I do to procrastinate from other things, and hence my sewing progress is relatively consistent. Obviously I need to start sewing professionally so that I can procrastinate by writing my thesis. Anyway. Having agreed to this exciting bit of unselfish, semi-professional sewing (yes, she even gave me money!), I promptly procrastinated like mad.

Fortunately, Serena is just as good at procrastinating as I am, so the photo-shoot hasn’t happened yet. Anyway, FINALLY I got a muslin made up (an altered version of this pattern) and last weekend I got over to her place to do a quick fitting. 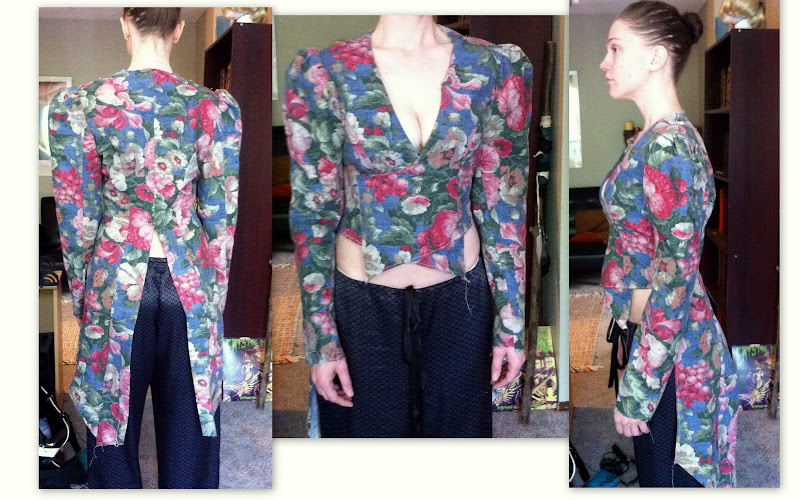 Serena's Coat---First fitting. Yeah, I know, big prints make bad muslins. I had meant to stitch it inside-out so the print would be less glaring. I forgot.

Now, Serena is one of the friends who’s closest to my size. In fact, generally since high school, I’ve benefited from the fact and received any number of stylish hand-me downs… I remember fondly the snake-skin suit, the black vinyl shorts, the jean-short cutoffs with barely a thread still holding the crotch together… fun times. But despite these items generally fitting, they never really fit, if you get my meaning.

So when I made up the muslin, I tried it on myself. Most of the alterations I had made were for style, leaving the basic fit of the jacket unchanged. And it had the predictable issues: too much room in the bust, huge swayback puddles, too long through the upper torso.

But, of course, it wasn’t being made FOR me. So I left it, and bought a crapload of little safety pins for the fitting.

And, as I’d long suspected, Serena’s fitting issues, despite our generally similar-sized bodies, are very different.

The bust curves that were swimming on me were perfect on her (I’m sure you can tell she’s a little, ah, better endowed than I). In fact, the whole front fit marvelously. The back was roomy, but instead of pooling at the small of her back, it was a bulky, all-over excess easily pinned out along the princess seams. The curve of the waist was in the perfect place. Although looking now at the way the tails hang open, I am wondering if I should widen them to hang more straight. There’s a seam down the middle of each tail, a continuation of the back princess seam, so it wouldn’t be hard to add. Hrmm.

So, I will take in the back princess seams, and make a few other alterations—the sleeve puffs need to be much, much bigger; the shoulders can be a little narrower; the sleeves will be narrower, too, below the puffs. She wants the tails a bit longer, something I’d initially suggested but she declined. I’ll also add some lacing at the back, so the jacket can be adjusted if she decides to wear a corset for the ultimate shoot.

Now, I just need to finish drafting my collar and cuff pieces, make up another test of the sleeve, and get to work with the real construction. Oh, and decide about the tails.

I did finally re-hem the Grecian Goddess dress to a wearable length, though, and wore it. I think it needs a slip, however. Even with nude underwear I felt a little bit, mmm, exposed. It’s not super sheer but it’s very, very close.

A few of you have commented that the weather here seems to have improved. I will cheerfully confirm this! We’ve had two weeks of what may be the loveliest weather I’ve encountered since we moved to southern Alberta, lots of highs in the upper twenties (80s to low 90s) with nighttime lows still mercifully cool (low teens C, 50s F) so chilling the house to prepare for another hot day isn’t a problem. A few humid days, too, which is unusual and really breaks my poor dry-lander brain. And thunderstorms, plenty of them, usually timed to correspond with the evening after I give in and water the lawn. Anyway, this is happy, gorgeous, wonderful summer. Though I am still hoping for some brutal, miserable hot weather later on, maybe come August when it might not be so bad for the crops. One mustn’t forget about the poor farmers. Although it generally seems like they’re hosed one way or another.

In other news, Lonsdale came! And so did the seam allowance gauge I won in Sherry’s giveaway way back when. Which I think means I’m up to date on all the goodies I’m expecting in the mail, unless I go and order something more. Which I shouldn’t the budget is not exactly happy with the amount I’ve been spending on sewing lately (yes, there has been Stashing.) Actually it has more to do with the amount my sweetie-pie has been spending on the motorcycle lately, but it all comes out of the same budget. It is time for both of us to Be Good.

Now here’s the question: how the HECK am I supposed to be motivated to sew other people jackets when I have a pattern like Lonsdale burning a hole in my sewing table?

Tagged as alter, fitting, Lonsdale, Serena's coat, too much talk