Lady in a Red Dress

Generally speaking, these people are not me. This is really too bad, as I like many of these looks on other people. And I’ve tried them on myself time and again over the years, only to go “ah, yes, that’s why I don’t wear this.” (with the possible exception of pouffy shoulders, which I like enough that I tend to ignore the linebacker effect.)

I really like the idea of dirndl skirts. They’re both ridiculously simple (gathered rectangle—can’t get any more basic than that) and economical of fabric, unlike my preferred circle skirts. But they generally sit right at the waist (not a good spot for me) and add a lot of visual bulk in that area.

With the shrug. There’s a bit of pooching out of the ruching at the bottom of the front panel, where the outer fabric is looser than the lining. Presumably I goofed my seam allowances slightly or something.

However, as I’ve observed before, something magical happens when I slide the “waist” of my garment up or down a few inches. I can wear empire waists or dropped waists until the cows come home. Now, I believe another term for “empire-waist dirndl” is “maternity wear”, but what about a dropped waist dirndl?

I wrote a bit here about the bodice construction and my fitting process. Having largely taken care of that, I came to the next stage in construction. The skirt.

I had initially planned to do a gathered circle-skirt, like the original Katjusha pattern that was my inspiration. But on examining the amount of fabric I had left after I finished the bodice, it seemed like to get the gathering I wanted at the waist (er, hip) I was going to end up with an extremely SHORT skirt.  Whereas if I went with a dirndl style, there would be plenty of fabric for whatever length I opted for. Some quick and dirty measuring (aka holding the fabric up to my hips), and I was happily ripping away. Four panels of full-width (45″) fabric, a little below knee length plus a bit for hemming.

Confessions of a lazy seamstress: I didn’t even trim off the selvedges. I just tucked them inside the french seams I used to join the four widths. When they pucker up and throw the whole skirt off after the first washing, you can all laugh and point.So, I had settled on my width for the outer skirt, but my voile (or whatever this fabric is) definitely needed a lining. Back to my white cotton (yes, the stuff with the laceworked panel. Don’t worry, I’m moving from the opposite end of the length and there’s a ton of it.For my lining width, I used the width of the shirred back-panel, stretched out. It would’ve been smarter to determine this width before I did all the shirring, but I wasn’t sure it was going to shirr up the right amount at that point. Shirrly* you understand my quandary? Anyway, I decided to use this width for both the front and the back of the lining. I would gather the front to the bodice front, and sew the back flat to the stretched-out bodice back. But, you really want something underneath to give a dirndl (or any full skirt, really, IMO) a little oomph. I decided to make my lining skirt tiered. So I cut it approximately half the length I wanted, and then cut four more pieces of similar length for the bottom tier, and broke out the gathering foot.

Now, this is not my ruffler, with whom I have a passionate love-hate relationship. I wasn’t willing to deal with his idiosyncracies for four measly widths of lining. (If that sounds like a lot of gathering to you, please understand that I got the ruffler foot in the first place to make tiered skirts for tribal bellydance. The first such I made had 32 fabric widths in the bottom tier. And nine tiers, although I think only seven of them ended up being ruffled. So from my rather warped perspective, this is hardly any gathering at all

So I decided to play with my new, inexpensive, and untested gathering foot (Here’s a post contrasting the two). I popped it on, measured some 10″ lengths on scraps of the cotton, played with my stitch-length and tension settings, and after about three tries managed to get a gathering ratio approximating 2:1. Good enough. I began gathering.

I think I’m not going to become a huge fan of the gathering foot. It’s not awful. In fact, compared to some of the shit fits my ruffler has thrown, it was possitively easy to use. But the resulting gathering is not particularly even; it’s highly susceptible to the slightest difference in how I hold the fabric in front of the foot (crowding the needle vs. letting the fabric lie flat). The main thing I like about mechanical gathering with the ruffler over my preferred semi-manual technique (where you zig-zag over a supplementary thread… the zig-zag acts as a casing for the thread drawstring which you can pull up later) is that you don’t have to futz over the gathering being even, even if it may not be the exact ratio you wanted it to be. The gathering foot didn’t seem to have this evenness, and even worse it was pretty tricky to try to re-distribute the gathers after the fact. For the lining, I didn’t care, but I wasn’t enthused about using it for something that will actually be seen. It did turn out about the right length overall, so that’s good anyway, and it was quite fast.

I did give myself one further complication, which is that I had designed the bottom front of the bodice to dip down to a V. I love this feature a ridiculous amount, but it takes a bit of mental gymnastics to figure out how to reflect this on the gathered side of the skirt. At least, without sitting down and making an actual pattern and spreading it the required amount, which sounds suspiciously too much like work. Instead, I roughly measured the depth of the “V” (minus seam allowance) down from the top of skirt centre front, and free-handed an arch going from the skirt CF to side-seam. Good enough for government work, as my mother says.

For the outer skirt, I used my preferred semi-manual gathering method, mentioned above. I use this for “moderate” amounts of gathering, or larger amounts (like this) where I value precision of the resulting dimension over precision of every little gather. I gathered the over-skirt to match the width of the underskirt, and stitched them together. Really, fairly easy peasy.

Then, I did something I haven’t done since Tyo was a baby. I hand gathered the entire skirt front (both layers, and hand-basted it to the bodice. WTF? you are asking. I agree. But we were watching Sucker Punch with the kids last night and I could do the gathering and basting by hand without totally ditching the rest of the family. Normally I’d prefer to be hemming in such a situation, but I wasn’t quite sure of the finished length so I didn’t want to get ahead of myself and hand-hem four widths of fabric to the wrong length. I wound up shortening it by several inches, so it’s just as well I didn’t try this.

Possibly I should also have hand-basted the back to the shirring, as that was a beast to do accurately and took a couple of goes. But, water under the bridge. Man, I’m just full of platitudes today. If I can throw “a stitch in time saves nine,” in before the end of the post, I’ll be flying. Well, except that that’s one I rarely follow. It’s still good advice, though.

I am a little concerned that the combination of the front ruching with the full skirt have pushed this past “sundress” territory into the hinterlands of “something to wear to a summer wedding.” Since I don’t expect to be attending any weddings this summer, this would be unfortunate. I may just have to suck it up and be ridiculously overdressed (after all, it wouldn’t be the first time).I wasn’t actively going for a “vintage” look when I made this dress. Although maybe that’s an inevitable reference for any full-skirted, tight-bodiced dress these days. Anyway, pairing it with the shrug just turns the “vintage” look up to eleven. It goes, though, doesn’t it? This shrug is ridiculously versatile. Seriously, I wear it with EVERYTHING. I need about five more.All that gathering in the skirt interacts a bit oddly with the back bodice, despite my best efforts to reinforce the bottom of the shirring with some sturdier elastic, but it’s probably not something most people would notice (dazzled as they will be by the swishy, full skirt, right?)Incidentally, the length is only sightly below my knee. Tyo was standing on the picnic table to take the photos, so they’re from more of a downward angle than usual. I’m wearing the fluffy petticoat as well as the tiered lining.And obviously I need some red heels. 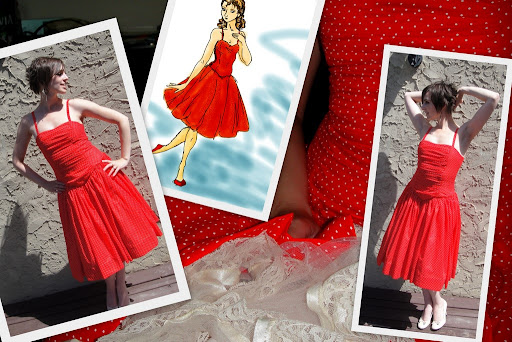 Final project and inspiration. I think I need a fluffier petticoat.

*I normally try very hard to resist the obvious sewing puns. I have never intentionally substitued “sew” for “so”. This one slipped through. I humbly apologize.

48 responses to “The Red Polkadot Dress”

Leave a Reply to Big in Japan Cancel reply