Loved Ones and Little Things

Today’s Me-Made June Friday Challenge was a photo with loved ones. I hereby submit my paltry effort. I spent the day at home taking care of a sick hubby (which is considerably more onerous a chore than taking care of sick children, I’ll add), which leads to less than glamorous photo-taking. I am limping along with my self-imposed 70s week, although the weather has not been cooperating so I may have to call it off early without wearing my two remaining (very summery) 70s dresses. Poop. For what it’s worth, I’m wearing the bellbottoms (again) with one of the several JJ blouses. Although a contemporary pattern, I think the JJ fits stylistically quite well with the 70s patterns I’ve been collecting, with the ruffles and little puffed sleeves.

In between making toast, iced tea, and “just being there” (because apparently me sitting in the living room while he sleeps on the couch half the afternoon is much better than him sleeping on the couch while I’m off doing something, oh, productive), some little bits of sewing has gotten done. The finishing handwork on my niece’s little coat, of course, but also a little vest for Syo from this nefarious pattern, made from the scraps from my niece’s coat. This pattern is one of those depressingly dumbed-down patterns, the kind that makes you feel embarrassed about being a home sewist. Although the instructions are to line the vest, there’s no lining pieces or even facings. So of course the lining is bound to peek out. Especially when it’s a knit and the shell is a woven. I cut the shell a bit bigger to attempt to give it some turn of cloth allowance, and topstitched after, but the fleece still peeks out a bit. Naturally I could’ve drafted a lining and facings, but that would’ve been work, as well as probably used up more scraps that I actually had. Anyway, Syo is very pleased with it, despite putting it on the first time and declaring: “It’s a bit loose.”

I have concluded this is Syonese for “It’s not skin-tight.”

She sewed the shoulder-seams herself, but chickened out on the other, highly curved seams. Also, grading seams makes a big difference when your fabrics are this bulky. I should do it more consistently.

Tyo, on the other hand, finally got back to work on her teddy-bear, which has been languishing as isolated head and arms since well before my sewing-room migration, and we finished it. She did fairly well, considering the 1/4″ seam allowances and sharp curves. I had to do more than I really wanted to (including hand-stitching all the bits together), but less than I had feared, so I guess it’s all right. It’s stuffed with rice, so it can be microwaved to serve as a hot-pad. It’s cute, in a rather floppy way.

I think I’m starting to wrap my head around the idea of actually teaching my kids to sew. Not having been actively taught myself, it’s hard to figure out what to teach. What needs to be said, what they’ll figure out on their own through trial and error. But progress is being made, and I guess that’s what matters.

Oh, coincidentally the girls are both wearing shirts I made, neither of which have been blogged, due to generally shoddy half-ass construction and lack of interesting or meaningful detail. I’ve noticed that I tend to make some pretty half-ass things for my kids. Mostly when they’re picking something I don’t much want to make, or I’m getting annoyed with the fabric of their choice. Both shirts are getting worn a fair bit, though, despite their inferior construction. My children have not yet learnt the stigma of “home made”. Tyo gets more flack, apparently, for wearing her (very expensive) Harley Davidson jacket. Go figure. 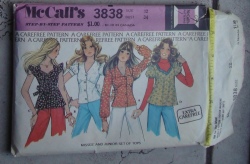 I did get started on a 70s blouse (well, more of a tunic, View C on the left) for me, out of some white cotton gauze. I hope to get it done this weekend,  if I can wrest control of the sewing machine away from my children long enough. Although probably not in time to save 70s week. I’m sad to say I think there’s probably more kids’ sewing in the immediate future, too. Tyo has fabric and pattern for a shirt picked out, and I got some really cute sundress patterns I’ll talk about another day…

21 responses to “Loved Ones and Little Things”