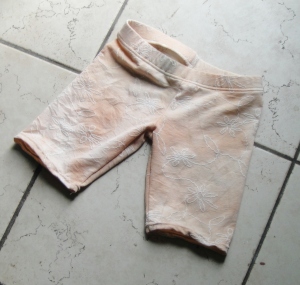 For once, I was not planning on jumping on the bandwagon. Beangirl made them for her kids. Joy made them for hers. But I was strong! I had no particular desire at ALL to make such a simple, prosaic item. Besides, my kids have lots of shorts and leggings.

But this weekend it was Syo’s turn to get a garment, and Syo wanted, of all things, bike shorts.

This is a piece of fabric that she picked out, herself, several months back, and has been patiently waiting for me to make up. “How about a nice dress?” I suggested.

“It would make a really nice T-shirt.”

Bike shorts it was…

First problem, of course, is that I don’t have anything resembling a children’s leggings pattern. Obviously I could’ve gone and found/bought/downloaded a kids’ leggings pattern, or just traced off an existing pair, but what fun would that be?

Enter Metric Pattern Cutting, a copy of which I tracked down in my panic after the disappearance of Modern Pattern Design. Although it doesn’t have quite as many nifty vintage details as Pepin’s, this book is amazing in its own way. All the usual dart-manipulation stuff. More blocks than you can shake a stick at. Information on standard sizing and grading, as well as drafting custom blocks. And it has directions for drafting knit blocks, including leggings.  Now all I need are the menswear and childrenswear versions, but anyway.

I managed to wrangle Syo into letting me take a ridiculous number of measurements, and then trotted off to attempt to draft up the shorts. The MPC draft is, of course, intended for an adult. Using it for a kid-size pattern is  not the smartest course, but I figured for something as simple and forgiving as leggings I would risk it. It wasn’t too hard to figure out where I needed to reduce the suggested measurements. 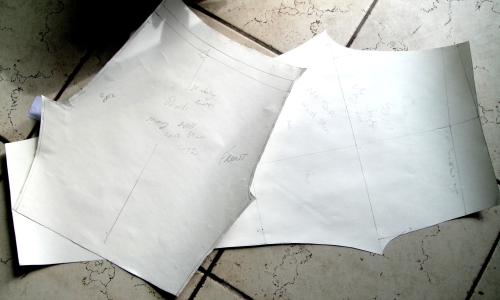 Anyway, it took perhaps half an hour to draft up the pattern (including time to hunt down my yardstick, which had vanished behind the livingroom bookshelf). For once my square and French Curve were where I left them, which is a minor miracle. And, in comparatively short order, we had a pair of bike shorts. I did have to lower the waistband by a good inch/inch and a half, as the draft makes it at the natural waist, and my children will have none of that.

Of course, the evil monkey had to dash off to a sleepover before they were quite finished, so I don’t have pictures of them actually on her yet… Grrr… But from the in-progress fittings, I promise they fit very, very well.

In other news, I’ve been messing around with computer pattern drafting, too, (there is THIS free program by a Burdastyle member, which is all right but a bit fiddly, but you can do a fair amount just with Inkscape or Illustrator) and have been thinking of sharing some of the patterns I’ve come up with that way, as it’s a lot less work than trying to scan and trace patterns I’ve drafted on paper. Would anybody be interested in some of that? My big weakness, of course, remains grading, but I’m hopeful that Metric Pattern Cutting will help with that…