All I need now are the bellbottoms 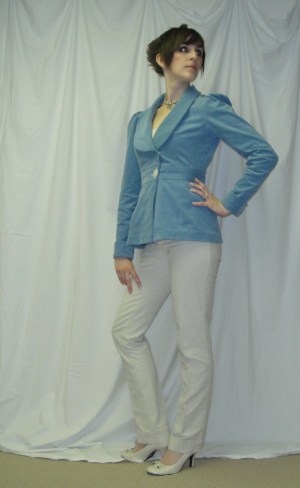 Thank you everyone who reassured me about my jacket’s cuteness in the comments to the last post—I know I’ve written before about that horrible sinking feeling mid-project, and I know I’m not alone :).  This time around was a little different because I wasn’t convinced it wasn’t going to fit—I just wasn’t sure it would be flattering on me. I still don’t know that it’ll replace the Springy Little Coat in my heart, but I think it’s a decently cute little jacket anyway. And I do love the finishing.

I decided against the topstitching. It worked well in samples in the middle of the cloth, but as soon as I tried edgestitching it went wonky. I had an insane moment where I considered ripping the cuffs and collar and adding piping, but I resisted (mostly because self-fabric piping would’ve been too bulky and I didn’t think I would be able to match the colour perfectly otherwise. And for whatever reason, I’m picturing tone-on-tone piping for this, not contrast).

The collar went on fine. The cuffs drove me absolutely bonkers. Seriously, I had them on, off, on, off, on a different way… and they’re still not perfect. I’m not sure if they were drafted too narrow or if it’s just my sleeve stretching out with handling, or an artefact of the flared shape of the cuffs, but they were too short for the wrist-diametre of the sleeves. So I narrowed the sleeves rather than re-make the cuffs. In the end they’re all right, although at least one of them has the side that I meant to be inside on the outside. Having ripped it three times at that point, I left it. I didn’t do any turn-of-cloth alterations this time around and I really should have. Mea culpa. I have such a hard time visualizing which side’s going to end up facing out when doing this kind of fold-back cuff. Maybe when I’ve done eight or ten more… 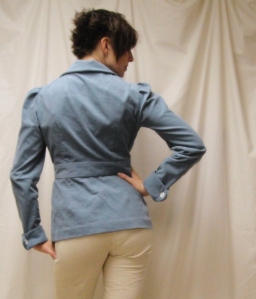 Back view. I think I would probably like a bit more flare in the peplum.

On the up side, I got the tight curves of the cuffs sewn much more smoothly than I usually manage, so I’m kinda stoked about that. I shortened my stitch length and sewed slowly but continuously. At times like this I really wish my machine had a slow setting, but anyway. I also used the trick where you press the seam of the cuff open before turning it, and it really does help the curve turn more smoothly. Who knew? (Yes, I’m bone-headed that way… it seems like there’s a lot of good sewing advice I hear, but then don’t absorb until I’ve learnt it the hard way.)

Hmm, what else? This is officially the best facing/hem finish I’ve ever done, facilitated by the lack of lining and the bound edges of both pieces. The pattern would have you finish the bottom of the facing 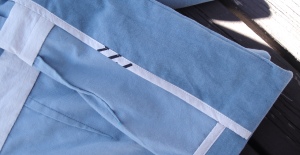 by tacking by hand, but I did it by machine and turned it up and it worked peachy. I even managed a nearly-invisible hem, again facilitated by the binding. I may just bind all my hems in the future. I did tack the facing in place at the waistband and the shoulder seams. The facing/collar/neck combination is super bulky and doesn’t lay very smoothly despite my best efforts. Possibly using Sherry’s collar technique would’ve helped, but silly me, I followed the pattern instructions. I know, it’s so unlike me. I also think I might’ve benefited from a square-shoulder adjustment this time around—it’s something I’ve often suspected I should need but it hasn’t seemed like a big problem in the past so I haven’t attempted it. It’s not a huge problem here, if only because the collar covers that area, but I think at least some of the wrinkling is probably from that.

There is a single button closure in the front (perfect for using up one of those striking, solitary vintage buttons). I was a little concerned that the top would gape—the pattern illustration shows a nice, close finish right at the bottom of the collar, but there’s no obvious way to achieve this. Well, on arriving at that point in the instructions, all is revealed: or rather, a single large, heavy-duty snap is called for. Fortunately I had picked up a couple thinking I might use one on the Springy Coat (I haven’t yet, the slight gaping doesn’t really bother me while I’m wearing it). I was hoping for clear plastic, but all they had was metal… ah well. It’s more “vintage”, right?

I was SO excited to try out my new buttonholer. One big keyhole button should do the trick perfectly, right?

The buttonholer did NOT like this stretch corduroy stuff. All my samples bunched and bagged like crazy, with big loops of thread tangling underneath. WTF? Worked fine on other fabrics. Even interfaced, it still had issues. I went ahead with it, only because I know how much I suck at doing manual buttonholes, and the buttonhole on the finished jacket (where it’s going through two layers of corduroy, one of them interfaced, and the lining layer) actually turned out better than any of my samples. Which isn’t saying much, but it will hold, anyway, and is still probably better than I would’ve managed otherwise.

The only other thing I’ll say about this pattern is it had notches out the wazoo. I think every single piece, every single seam had a notch, if not two. Some were helpful, but a lot just seem extraneous.

On the subject of a frock-coat for my hubby, I’m happy to say I think this pattern will do the trick nicely. Just omit the patch pockets, add a welt pocket or two, change the side back vents to centre back, and lengthen to about knee length. The rest of the seaming is identical to his jacket. Although I’m not planning this for an immediate project, he may get excited about it and become a pestering pain, in which case it will probably get done sooner than otherwise. I hope not. I have lots of other stuff I should be doing.

39 responses to “All I need now are the bellbottoms”