You know, where you start sewing something together and it’s just not quite right. Your fabric isn’t behaving the way you envisioned. You mess up a seam and don’t notice until it’s graded. You begin to suspect that your arbitrary alterations weren’t the right ones after all…

Erm, I’m not the only one who gets this way, right?

I have gotten the front bodice constructed for Simplicity 6023. After experimenting with knit interfacing, I decided to use an extra layer of the black linen (actually a linen-cotton-lycra blend, really quite yummy) for interfacing instead. And I decided I would make piping (from one of my scant scraps of the plaid) to edge the neckline and cuffs. Then I sewed the three layers of the front yoke piece together (one half, anyway), notched, graded, and realized that I had forgotten the piping. Rrrripit. Add in the piping. Flip around, and realize that the linen is quite a bit sturdier than the plaid fabric and really doesn’t need the extra layer for interfacing.

Use the pinking shears to remove as much of that extra layer from the middle as I can, because I’m way too half-assed to unpick again.

Manage to trim the piping too much at the corner, so it’s fraying a bit when clipped.

Anyway, it looks cute. I have a sinking feeling I should’ve raised the armscye without raising the neckline, and shortened the bodice lower down. Or perhaps left it, as it’s designed to hit above the natural waist (which probably means it would hit right at my waist).

Probably, it will all be fine. I like piping. I like plaid. I have a great excuse for not even trying to match my plaids. The black detailing looks pretty sharp. The neckline may be higher than I wanted, but that’s hardly the end of the world. At least I’m pretty sure this one will be large enough (if not a bit too large, given the stretch in both my fabrics)

After all this self-drafted stuff with seam allowances of 1cm or less, the 1.5 (5/8″) regular seam allowance seems positively excessive. Especially in nice, minimally fraying fabrics like these. 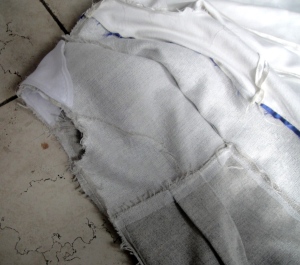 On the subject of the Springy Coat (may I just say that working on two projects at once, when you only have one sewing machine, is REALLY ANNOYING? I have spent way too much time re-threading in the last three days) I put my shoulder-pads and sleeve heads/wadding in as per the latest installment of the RTW, and am HAPPY. I love how it just ups the look that little bit. It was kinda a pain since I’ve already (contra the sewalong) stitched my lining to my facings (I did this before sewing the facing on to the main coat, as I didn’t think I’d be capable of getting the piping right while wrestling the whole coat), but I managed. I will take a moment to note my jealousy that Steph has already finished her jacket.

Oh, and while I was at Fabricland picking up the black linen, this coating followed me home. I’ve been keeping an eye out for something with a good drape for Simplicity 8613. I was thinking either cream (I know, I’m making an off-white coat right now) or blue or coral, and this combined two out of three.

I think a fabric diet is in order. I seem to binge every few months, and then fast for a while, but I’m not getting stuff sewn at quite the rate that I’m buying. I’m not anti-stash, mind you—I especially like to have on hand various “basic” fabrics, like denim, plain-coloured knits, lining—but I also don’t want it to get out of hand.

Tagged as fabric, in progress, Simplicity 6023, Springy Coat, too much talk, whining

18 responses to “That horrible sinking feeling…”