Hip hip hooray for the RTW sewalong kicking off! … once I got over the shock of realizing (silly me) that it was starting a day earlier than I had thought, on acount of being run from the future, aka the other side of the International Date Line.

Those of you on flickr may have seen this image a couple of days ago, but I thought I’d share it here for (I hope) a wider audience. (No hope of taking outside photos today, it’s dreary and with the winter storm warning in effect it’s not a matter of if we get snow, but when) 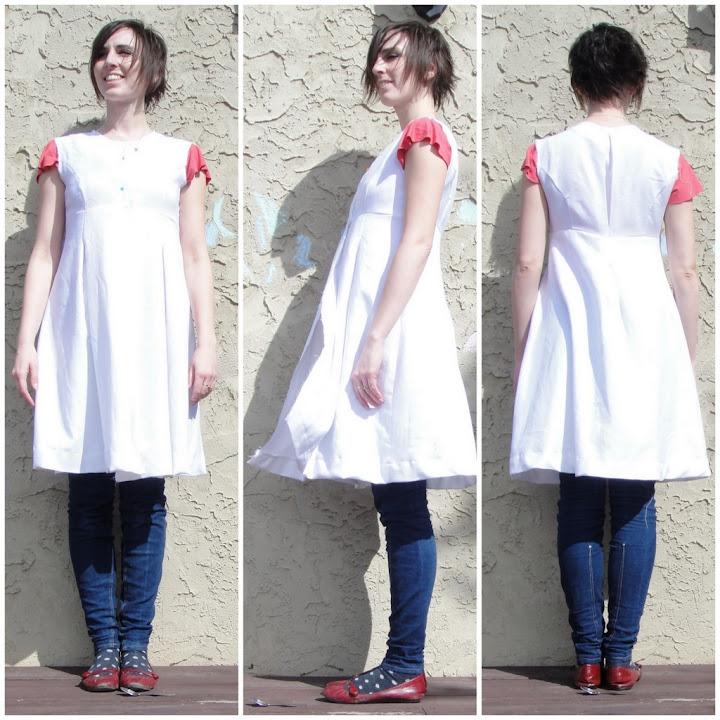 This is a muslin for (most) of my Springy Little Coat. And overall, I think it looks pretty good, although I must admit, at this stage it looks remarkably similar to this. Perhaps I could’ve saved myself some pattern-drafting time and just swiped the skirt panels from the dress? Ah, well.

That aside, the skirt hem is pretty level, the width is nice, the pleats seem to fall relatively as-they-should. I think I want it a wee bit shorter (say, two inches), but that’s why we make the muslin. I was quite chipper.

Then, yesterday, I was looking at my pattern pieces, and I realized… my front skirt piece is more than an inch longer than my rear skirt piece.

This is disturbing on two levels. Not that I would manage to measure them the wrong length—I know that kind of drafting sloppiness is well within my capabilities, and I hate walking seams so I’m not surprised I didn’t catch it, either. No, what have me flummoxed are 1) how I actually managed to sew those dissimilar lengths together and have them match up perfectly (with no visible puckering, although obviously a crapload of bias easing was involved), and 2) oh crap, that means that my skirt front probably does need to be longer than the back… at least at the CF. Which makes sense since I know by under-bust seam isn’t perfectly level—it runs straight around my body, but straight around my body is at an angle to the ground, as my entire rib-cage is tilted—part and parcel of that weird postural thing called a swayback.

So I should really probably modify my skirt lengths to reflect the uneven waist—basically what I did here by accident, but on purpose, with pattern pieces that actually match up. /sigh.

At long last, I managed to wear this combo yesterday, for the last day of Me-Made March. Hooray! I’ve been waiting for the weather to warm up enough for a decent photo of this combination ever since I finished the jacket. Yay! Of course, my backdrops can’t quite compete with Debi’s, but, well, that’s life. There’s a few east-coast places that can compete with Europe for architecture, but nothing this far west. And miracle of miracles, the outside photos seem to have finally captured the fact that this dress is purple, not black! 😉

I’ve actually worn this dress three times this month, which is pretty unusual considering the weather and the dressness of it all. Yesterday, for a plus, I wasn’t even staying home all day—I had to drop the car off at the shop, pick up the rental, and then, as it turned out, pick the hubster up at work and drive him to the ER since the silly boy put something heavy and metallic through his finger and needed a number of stitches.

I may do a MMM-wrap up post later in the weekend (depending on how much real sewing I get done 😉 ), but for now just a couple of thoughts.

I’ll go into what I didn’t wear, and why, a bit more comprehensively later. For now, I just want to toss this out there, with maybe a link to the full flickr set of Me-Made March (missing, I think, only one day)