Nothing like a me-made month to get me off the fluffies and back on track making practical clothing. Today’s version being rather more successful than yesterday’s.

I made a couple more tweaks to my ever-evolving “Pattern formerly known as Lydia“. Since at this point I’ve altered the waist curve, the shoulder angle, the sleeve-cap, sleeve length, sleeve shape, and the neckline, I should probably give up on calling it a “Lydia“, and just call it my “Knit top TNT” or something equally generic. This time, I tweaked the sleeve-cap again, removing a bit more height, and attempted a seam-free swayback alteration, which creates much the same change in the angle of the back shoulders as Sherry’s method, except that… well, I dunno, I like the funky pivot-and-slide stuff. I then decided, on a whim (actually to optimize my pattern layout) to cut the back on a seam, so I took the opportunity there to add a teeny bit of shaping as well. If I decide to make the CB seam a regular feature, I can do a much more thorough swayback fix in the future. 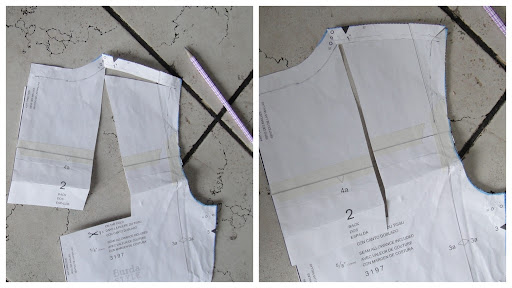 No-seam swayback alteration. Yes, it affects only the shoulder.

My previous Lydias have been scoop-necked and plain. I didn’t want to just make another version in blue, so I decided to try a boatneck and a back ruffle, a nifty little feature I am blatantly stealing from Heather of Feathertysews. Thanks! I was a little hesitant about trying it in such a heavy fabric, but it actually worked out really well. Yay! 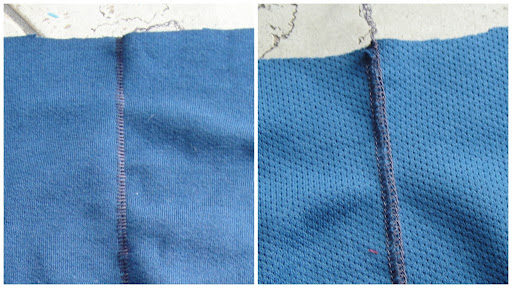 So, back to that CB seam. I didn’t really have enough room to add a seam-allowance, so I decided to try flatlocking the seam. This is a trick you can do with a serger, where you basically turn the needle thread tension way down. That way, after you serge the seam, you can basically pull it open so the ends of the fabric butt up right against each other. One side looks “serged,” the other side has these horizontal loops of thread—actually quite decorative; I have a RTW tee that features it (and I thought it was a super-cool feature when I bought it). It works best with a fairly beefy fabric, and I gather is used a lot in active wear, for butting fleeces and things like that. Here’s a better overview than mine… Since my knit is a fairly sturdy athletic/winter knit, I thought it would work, and after a certain amount of messing around (my serger’s tension settings are wonky at the best of times) I got it to work. I wasn’t too concerned with it being super-even, as my next step was to cover it with my little stegosaurus ruffle.

I cut a piece of clear elastic just a little bit longer than my shirt back, and a strip of

my fabric about twice as long. I was originally planning to be quite scientific and match my ends, halves, quarters, etc., but it seemed like that would require too much stretching of the elastic, not to mention require more precision than I’m truly capable of. So I just held the elastic as taut as was comfortable, and slowly let it out as I stitched (a narrow zigzag) along the middle of the fabric strip, though both elastic and fabric. The result is that the strip isn’t gathered as evenly as it could be, but it doesn’t really show (and even if it does, I can’t see it 😉 ). Then, using the same narrow zig-zag, I stitched the ruffle overtop of my flat-locked seam.

I used Sherry’s binding method here for the neck, which I attached in a C (that is , after sewing one shoulder but with the other one still open). It’s a wee bit gapy but I’m hoping that will go away in the wash. I didn’t include any clear elastic this time as the fabric is already fairly bulky… we’ll see if I regret that in the long run.

You can see that, although an improvement, my swayback alteration attempt was not enough to remove folding at the small of my back (the fact that the shirt is riding up on my belt isn’t helping, but I promise even when tugged down the problem persists). I’m happy to say the change in shoulder-angle doesn’t seem to create a problem, which I was worried about. If I try a CB seam again, I’ll do a real swayback tuck.

The further reduction of the sleeve cap seems to have hit a sweet spot (finally!); it went in (flat) essentially flawlessly, even on the serger.

I have to say, beefy, stable knits are such a dream to work with. I twin-needled the hems without needing to stabilize, with no problem at all.

Whew, I needed that after yesterday’s fiasco.