My mother, in her assiduous trawling of the charity shops in my home town, stumbled upon this gem of a book, published and distributed by a local sewing school in 1953! It appears to have been the textbook for their course, which was available at least in part by mail as there is a note concerning a charge of $.50 to $1.00 plus return postage for correcting each assignment.

Assignment one included making samplers of tucks, pin-tucks, lapped tucks, gathers, gathered darts, and corded shirring. Assignment two was samplers of a shirt-waist collar, a plain sleeve, a hem with seam-binding, and a zipper at the side of dress. Obviously the target audience was not the novice seamstress, but the home sewist with ambitions of improving her craft.

Topics include fabric and style info (including non-washing-machine methods for pre-shrinking fabrics… apparently only linens and white cottons should be boiled; other cottons should be soaked in warm water, not wrung out, and hung to dry still folded). There’s an extensive section on fit (actually, about four separate sections… the layout is a bit confusing), with a large emphasis on pattern measuring (sensible since muslin-making was impractical and frowned on); at least fifteen different kinds of seams. Also a (short) section on lingerie, and a much longer section on sewing for children, with such highlights as “How to Dress the Stout and Slender Child” and “Styles to Suit a Stout Little Girl”.

I’ll post more once I have more of a chance to go through it, but I couldn’t resist passing on this princess-seam FBA (also suitable for a rounded back), which is a bit more free-wheeling than the Palmer-Pletsch method I’ve usually seen (not that I’m any kind of expert). 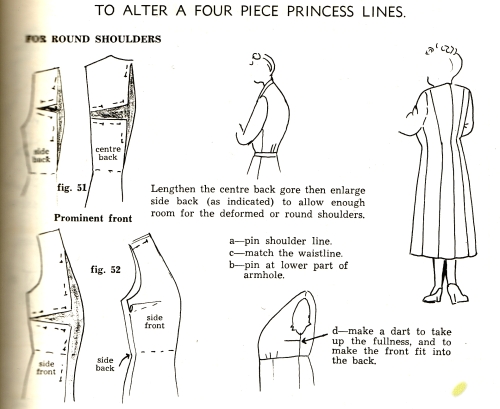 And also, this full-bicep alteration, which I know for a fact I’ve seen out there somewhere, but can’t for the life of me recall where. 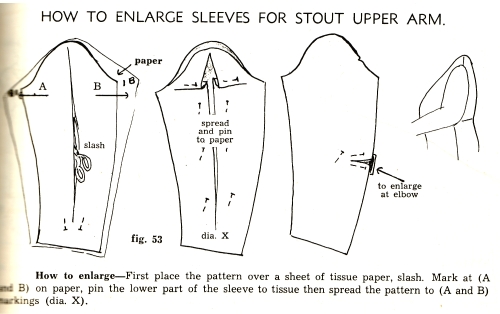 And it begins with this lovely admonishment:

You are judged by your Appearance!

If I were ambitious and dedicated, I’d do like Gertie or Megan and take up the challenge to sew my way through the course. I don’t think that’s going to happen. Sorry. But I will pass on whatever gems I do find! 🙂