…to bring you the Annual Tanit-Isis Family Christmas Cards

I think I outsmarted myself.

But if you’re going to send people cards in lieu of real presents (sorry, Grandma), eventually you start to think about quality. About… y’know… meaning. 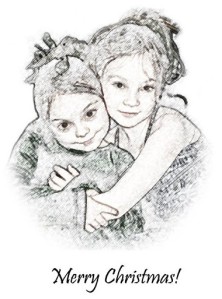 (I think that was the year Sears stopped giving great coupons for family sittings before Christmas). And once I was taking my own photos, well, I might as well mess with them in photoshop, throw in a few cheesy filters for good measure, and the next thing you know I’m trotting off to Michael’s, picking up a pack of blank cards, and spending far more time than it really ought to take to figure out how to format the damn things so the writing inside and the picture outside come out on the right ends, right ways up.

And it’s served me well, the last several years. One year we had my two nieces in the picture as well. Usually it’s been both Tyo and Syo.

But this year, apparently, something came loose in my brain.

A passle of complex Christmas cards

Because instead of just picking up another pack of ivory cards, I grabbed black ones. Which, of course, you can’t print on.  But you can print on other papers, cut them out (with fancy scissors), and paste them on!

And then you can add stamps! Yes, Christmas stamps! And embossing powder…

Perhaps a bit of backstory is in order here. My mother, bless her heart, is a serial crafter. (Sorry, Mom, you know it’s true.) She has probably dabbled in just about every hobby you can think of in the past forty years , from stained-glass to needlepoint to beaded jewelry to fabric-covered boxes to… well, stamping.

I won’t even mention the basic “crafts” like sewing, knitting, and crochet. Oh, there was tatting, too. Tatted lace

Secret stamp in every card!

is really pretty. And painting stencils on the walls was fun. To her credit, she never quite succumbed to the scrapbooking. I think by the time it really caught on, she was overwhelmed with other things. Although I think stamping could certainly be a gateway to scrapbooking. And she did her own photography and darkroom-work, too, back in the day, which again would go great with scrapbooking…

Anyway. The stamping was quite the thing in the 90s, as I recall. There was even a whole stamping store in my hometown, which only happens when a fad is in full swing because it’s really not that big of a city (well, nowhere in Saskatchewan is). She made the most gorgeous home-made cards and even sold a few of them, with fancy papers, many coloured inks, and, of course, embossing powder.

For those of you not in the crafty know, embossing powder works like this: you make a stamp, often with a special clear “glue” ink, then sprinkle the very fine embossing powder on it. It sticks to the stamp, falls away from everywhere else. Apply heat—we initially used the iron (no contact though) but she eventually acquired a special heat-gun-type tool for it—and the powder melts, fusing to the paper and forming shiny, raised lines.

(If glitter is the herpes of the craft world, surely embossing powder is the chlamydia.)

Anyway, as these things go, the fad passed, my mom’s interest moved on, and several Rubbermaid tubs full of stamping supplies languished in her basement, until last summer when I had the bright idea that I would see if I could liberate them. I was pretty sure Tyo and Syo would have a  blast. So when we were home last summer I snagged the works—stamps, ink-pads, embossing powders, and even the weird heat-gun-thingy.

They had a blast. I was fully expecting all the stamp pads to be thoroughly dry (they were last used when I was in high-school, after all), but most are in good working order.

… and now I’ve covered the kitchen with stamps, scraps of paper, and a fine layer of silver embossing powder, yelled at the kids for smushing stamps every which way, and had better do some quick cleaning before bed or my husband may not speak to me again this year. If ever. 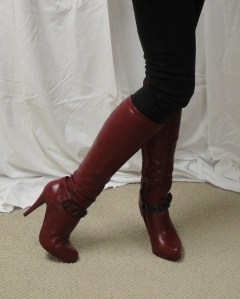 In other news, Tyo is fast developing into an enabler. She talked me into buying these at Value Village today (in between hunting down knick-knacks to give to her friends. Knick-knacks at VV are sooo vastly overpriced. Anyway. Blaming them on her makes it all right, right? She said I should wear them to a Christmas party as part of a Mrs. Claus costume.

Unfortunately, they’re too dark to match with the Lady Grey coat.

I guess that means I need to watch out for a bright red pair, right?

Tagged as Christmas cards, Footwear, too much talk

26 responses to “We interrupt your regularly scheduled coat sewing…”