Look what I did! 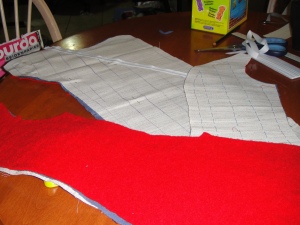 I spy, with my little eye, something that looks like a Lady Grey!

See what I did?

Sorry. Syo’s on a Dick and Jane kick, believe it or not. My aunt gave her a set of board-book reprints featuring such classic tales as “Jane and Mother” and “The Funny Baby.”

Now, I’m a big fan of classic children’s books. Maurice Sendak and Dr. Seuss; Robert Munsch and Dennis Lee (those two might actually be Canadian phenomena, but they still rock). A dozen more that I could reel off. Top-notch children’s literature is critical, not so much for the kids—they’ll listen to pretty much anything—but for your own sanity, because you’re going to be reading these books again and again and again. I think I made my parents read me “The Secret Garden” seven times when I was Syo’s age.

… But somehow “Dick and Jane” were notable in their absence in my literary upbringing.  I suspect my mother may have had an active role in this, although maybe it was just the 80s. I was sort of under the impression that “Dick and Jane” were dull, cruel readers that children of an earlier time were forced to read in grim school-rooms, probably under threat of The Strap.

Apparently not. Apparently, they are fascinating, enthralling masterpieces of prose for that child on the cusp of literacy, craving the familiarity of a limited, repetitive vocabulary. Apparently the serene, white, nuclear world where Mother vacuums in heels and pearls while Dick and Father throw a baseball and Sally ties Spot’s ears above his head so they don’t splash in his water dish, is just what my younger daughter relates to.

As long as no one’s expecting me to vacuum in heels. Pearls, maybe.

Anyway. Look at that! Genuine Lady Grey progress! I laid out my fabric (this is the remnants left after Tyo’s Russian Princess Coat). There was just over 2m of the red (although functionally not very wide since it’s so off grain) and just under 1m of the black. And, I had enough fabric! The belt may be touch and go (I’m not worrying about it at this point… worst case scenario it will have a seam down the centre and lining fabric on one side), but I had enough! The collar and facings will be black, which I think will be supremely striking.

I managed to squeeze both fronts and side fronts and a collar out of the 2m of (very narrow) hair canvas I had bought a while ago, but there won’t be enough left over for a back stay, which I would really like this coat to have, so I’ll have to pick up more. I also didn’t have quite enough of the super-light-weight interfacing I used to stabilize the whole back pieces (this is a knit fabric, remember, with a disturbing amount of lengthwise stretch), and I can’t find the rest of the pattern to cut the lining, but I did what I could with what I had today, and I should be able to keep busy with the hand-stitching until I can make it to Fabricland to get the other bits and pieces. Hopefully the rest of the pattern turns up before I need to cut the lining, otherwise I’ll be winging it. Which, given the number of fitting tweaks I made might not be a bad idea, but I’d like to have the option, anyway.

If Tyo’s coat is the Russian Princess Coat, will that make mine the Czarina Coat? 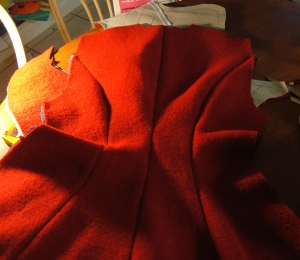 Coat back. Ready to catchstitch down the seam-allowances by hand.