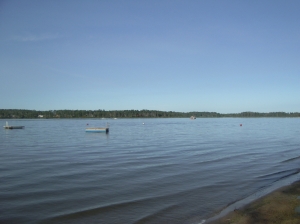 The Lake... we may or may not make it this far this year.

So, the sewing is about to take a break as we head off for the yearly “vacation” back home. I love going home—it’s way more exciting to visit than it was when we lived there! And I miss my kids. Older daughter is turning 10 tomorrow; she sounds so grown up on the phone. House is almost clean, laundry’s mostly done, keys are with the housesitter. No empty house this year—we learned our lesson (and you don’t ever want to wake up at one in the morning while camping, with crappy cell coverage, to a dropped call trying to tell you your house an eight our drive away has just been robbed. Thank goodness for tenant insurance. Anyway).

So, the sewing is going to be a little light for a while, but I hope to hit up the thrift stores in my home town (which tend to be a little more exciting than my local Value Village) so hopefully I’ll trip over some cool fabric or patterns. And when I get back—it’s time to prep hardcore for Self Stitched September!

On that front, a little bit of planning.

I’ve done not too badly on the tops front, assuming any of them are still wearable by then (the cowl-necks out of that really thin knit are not holding up well). I still need:

Perhaps a bit of backstory is in order. The Hudson’s Bay Company started out at a fur-trade company across the Canadian Northwest, however many hundreds of years ago now. They set up trading posts across much of Canada, trading the highly desirable furs trapped and hunted by First Nations people for a variety of European goods. Including the now-famous Hudson’s Bay point blankets, heavy pre-shrunk wool creations. The most famous are cream with four coloured stripes across one end, and of course the black points. My personal favourites are solid red, with a black stripe. These blankets were valued for many things, not the least of which was making coats; originally of course, only the blankets were sold/traded, and people made the coats themselves. More recently, as the HBC expanded into one of the largest department stores in Canada, they began to sell coats made from the blankets themselves. Fast forward to the late 1970s, when my parents were first married; my father bought my mother a Hudson’s Bay blanket coat (if you knew my parents, you would understand this says a lot about them). A full-length, black-and-red, wonderfully warm blanket coat. I imagine my mother wore it, although not overly much.

When I was 17 or 18, I discovered it. It was my first full-length coat, and the first time I ever felt like anything other than a blob during the winter months.

A crappy picture of a gorgeous coat

People on the street stopped me and told me I looked like a movie star. It was awesome. I wore it to death (I still feel bad for that), until the lining was ripped (I patched it), the armpits were pulled out, and the back was almost worn through from my backpacks. That’s it on the right—the only picture I seem to have of if (a terrible one of me, by the way, but the coat still holds its own, I think). You can, however, observe the too-short sleeves. Yes, even my favourite coat of all time had too-short sleeves.

Anyway, I would love to have another HBC blanket coat. And I would love to have a Lady Grey coat. So wouldn’t it be awesome to combine the two? (The bonus—the shorter Lady Grey coat presumably wouldn’t require quite as much fabric as a full length coat. Those blankets are EXPENSIVE!). The only worry I have is that the blanket might be a bit too heavy for the pattern; it’s heavier than a standard wool coating, that’s for sure.

I don’t know if this will happen in September, or even this fall. I still don’t even own the Lady Grey pattern (I am promising to reward myself with it when I finish two of my current three projects at work, but it’s not going well). I certainly don’t have a HBC blanket or two kicking around, and they are not cheap as material goes.

Tagged as plans, Self-stitched September, too much talk