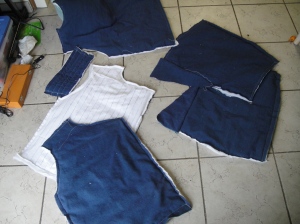 This is not strictly my project, but a re-enactor friend wanted some help with making a gambeson, a kind of quilted shirt for wearing under his armour. So yesterday we spent some time looking at pictures online, and then trucked off to Value Village (which might actually be redeeming itself in my eyes) where he was able to pick up a nice heavy blue cotton curtain (Ikea), a large white cotton tablecloth (I hated to cut it up… it was actually quite nice) and a raggedy-ass old polyester duvet, all for under $20. We brought it back to my house, took some measurements, and cut out a the various rectangles (fronts, back, sleeves), stitched them together, and then began fitting. I’ve never done a draped pattern before (using the term “drape” very loosely), but it was really neat… as we pinned it on it became pretty obvious where we needed to remove 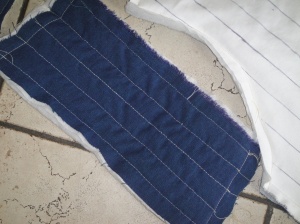 Test sample of machine quilting. The hand-quilting sample was too embarassing to show.

fabric around the arms and neckhole (and add a gusset under the sleeve)… and by the time we were done we had what actually resembles a fairly “modern” pattern silhouette. Nifty! Anyway, this is how it sits right now. I was trying to convince him to hand-quilt (time-consuming but less fiddly since I don’t have a walking foot and more authentic, but he wants to use a contrasting thread for the quilting  and neither of us were going to be able to make that look good by hand. Ah well.. this way he’ll probably have the shirt in a week or two, rather than it taking months.

Now, for a disclaimer—I’m not and never have been a re-enactor, although I can understand the appeal. But if I were, I’d be such an authenticity snob… I can totally see myself fully hand-stitching a garment just so that it had the right “look”. Making something with a re-enactor who really doesn’t care about authentic detail as long as the general look is right… well, it’s not what I would want in a garment. However, not my problem, right? 🙂