For #BRAugust and Sewcialists Theme Month #SewOverUnder, I thought I’d try tackling some soft nursing bras. My pattern of choice is the Cloth Habit Watson Bra, which I’ve made before. While I didn’t wear the previous version(s) much, there were a couple of things that made me think that a maternity/nursing version might be more to my taste. The first thing being that, unlike when I made my first one, I have almost no bras that fit me at all right now, and the ones that do fit aren’t underwire. Also my preferred foam-cupped bras not only no longer fit, but aren’t suitable for nursing, and are giving me weird bruise marks since the belly basically begins right below my boobs. And soft bras are more comfortable for the lounging-and-feeding-twins-constantly lifestyle I’m anticipating. And the previous versions I’ve made were all the long-line, which is SO cute but doesn’t work at all well with my ribcage, which flares out at the bottom even when it’s not being expanded by growing parasites. 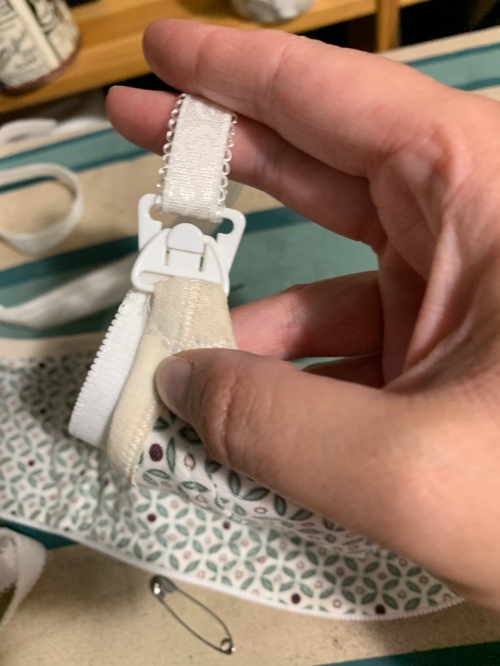 Now, I breastfed EXTENSIVELY with my first two children, and I have Opinions (as I’m sure everyone who’s done it does) about nursing bras. Mainly that if your bras are soft cupped, the nursing clips are largely a waste of time. Even with my storebought nursing bras, I mostly left them clipped and just popped my breast out the top. However, it’s possible that nursing twins will have some different challenges, so I wanted to at least try out some “proper” nursing bras.

Regardless, it’s a long weekend here and I actually managed to take myself downstairs, tidy up enough to be able to stand being down there, and sew up a bra! 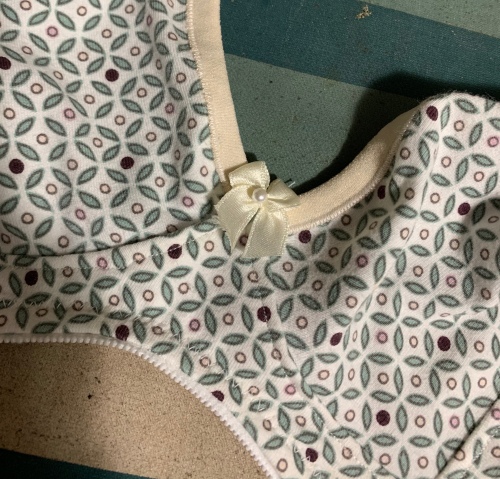 Well, lacking a proper back closure because the one I had in stash is AWOL, but otherwise complete down to the little bow to hide the wonky stitching where the cups meet.

I used a 36” band (in the past in this pattern I’ve made the 34” band, but as I said my ribcage is a bit, um, expanded right now.) I have a really hard time figuring out my cup size in this pattern as it uses the method where you compare your full bust with your high bust. That’s still only a 2” difference for me right now and I was pretty sure the 36B it corresponds with wasn’t going to work. After taking some measurements of my breasts and the pattern pieces, I decided to make the largest cup size the cradle I had printed out would accommodate (36E), and then at the last moment freaked out and made some tweaks so I could make the largest size I had actually printed out, the 36F. This was probably not necessary, given the stretchiness of the cups, and they’re so tall the clips are almost on top of my shoulders, which probably isn’t ideal, but on the other hand there’s definitely some engorgement and expansion in my future before things subside. For my next one I’ll go down a cup size or two.

My material is a beefy cotton spandex jersey from Periwinkle Quilting. I lined the front band with a light-weight and rigid mystery fabric I’ve kept around just for that purpose, and the back band with a very light-weight stretch mesh that may not actually do anything. I used basting spray to secure both linings in place, which worked much better with the rigid front, but was pleasantly quick anyway.

One of the best things about a bra project for me right now is that I could lay out the fabric on the little counter in my basement and cut without having to bend over! Not that there weren’t still issues (as you can see in the above photo) but bending over the dining room table to cut things out has become quite a chore. And the short little seams were easy to sew without getting short of breath, which is another issue I’m having.

Fit wise, aside from the cups being a little large, the biggest flaw is some drag lines in the side of the band. I’m pretty sure I had the same issue with the previous versions I made and took a wedge out at the top of the side seam to fix it, so I guess it’s no surprise it would reoccur.

I will say I’m quite happy with the size of the cradle. It fits the base of my breast quite nicely, which is not always the case because my boobs are pretty wide for their depth, and the narrow version fits quite nicely close to my underbust. The soft and stretchy cups aren’t exactly highly supportive, but I wanted to maintain a lot of flexibility since fluctuation is the name of the game when nursing.

The nursing clips (which only came in one size) are designed for 3/4″ straps, and all my strapping is 1/2″ or less, so they do slide around a little wonkily. I could try to hide them with more little bows, or remove them, but I’ll probably just leave it and see if it annoys me. It probably won’t. And the elastics to hold the straps in place aren’t exactly hidden. I’ve seen other patterns run them down to the centre bottom of the cup, but I was afraid that would create weird lumps and pressure on the breast, so I just ran them down to the side. If I get ambitious and attempt a nursing Marlborough bra, I would do a second power-bar piece on the inside to hold it in place.

On the whole, though, I’m happy with how it came together. It’s far from perfect, but I think it will be highly functional. And I have several more sets of nursing clips to use up so I’d better get on it…