In my first two pregnancies I had very little money for specialized maternity clothes, and got by largely on sundresses and gigantic overalls (having summer babies helped). So I never got to try out several popular maternity features—the tall jersey top for jeans and other pants, for one, and this gathered-front style shirt, for another. It seemed like a pretty simple hack, but never having an original garment to examine, I wasn’t sure. But when I read the hack instructions on the Maternity Sewing website’s blog, they were even simpler than I had imagined, and I really wanted to give it a try.

The fabric is a leftover from an old Fabricland project (a Gertie/Butterick B6031 slip) and is allegedly an organic cotton (I say allegedly because the fabric originally arrived labeled as “organic bamboo”, which it obviously was not. We got the correction a few days later but I remain dubious of the supplier’s competence). It’s not very thick, but supremely stretchy and comfy.

Well, I managed to stuff up the hack: can you see the chalked line where I was supposed to be removing the waist shaping, but just cut along the original pattern instead? The good news is thanks to the wonderful properties of spandex the resultant tank top works just fine anyway; I also didn’t go up a size or two as per the recommendations. My base was the Tuesday Stitches Tropo Camisole (it just occurred to me that Erin of Tuesday Stitches is one of the founders of Maternity Sewing). I just picked it because this has been my go-to tank top/cami pattern since its release last year. So basically all I did was extend the bottom of the front by five or six inches, and gather that to match the back. 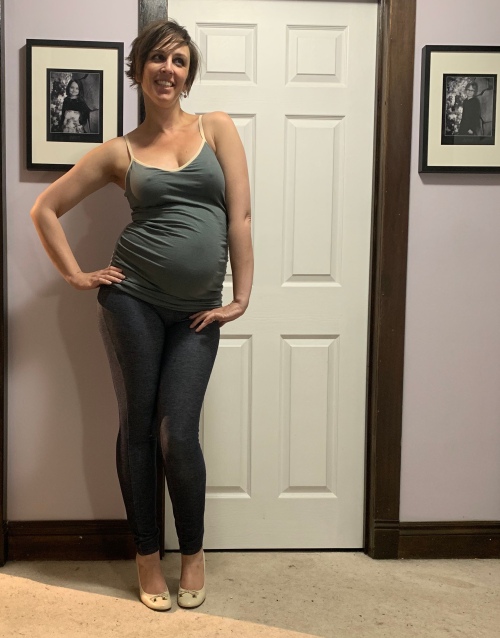 I did include a simple shelf bra made out of self-fabric. It’s not super supportive (did I mention this is really stretchy fabric?) but in a world where none of my bras currently fit (and I’m not likely to take up jogging or trampoline in the near future) it does the trick. It took a bit of futzing to get the length right, but I’m pretty happy with it now.

I should confess that it’s not entirely done, and I’ve been wearing it all day anyway. I need to shorten the straps a bit and decide how I want to hem it.

All in all I’m really happy, though. This was a simple project, a simple modification, and its produced a very comfy, easy-to-wear garment. I don’t know that I need a million of them, but one or two to get me through the summer probably wouldn’t be amiss. I don’t want to create a massive maternity-specific wardrobe that won’t adapt after, but I also don’t want to feel like I’m wearing the same two or three sacks again and again. (See above about my first two maternity wardrobes)

I guess at some point I should try making baby clothes. I’m really not feeling it though.