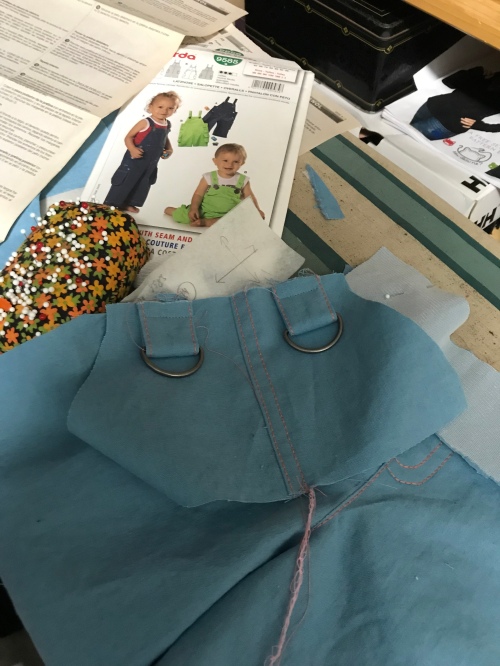 After the protracted trauma of the suit jacket (post still to come), I needed something fast and satisfying. And fortunately (?) I had another deadline just around the corner—a baby shower for one of my old Fabricland colleagues.

Now, I didn’t sew when my children were little (and even if I had, that was before the plethora of insanely adorable modern kids’ indie patterns mushroomed into being) so while I do have a few baby patterns, most of them aren’t, ah, overly compelling. There are a couple of nice vintage dresses, but nothing I felt really moved to work on. The one exception was this tiny overalls pattern. It’s been a long time since I indulged my love of sewing with hammers, but there are few things more satisfying.

And when I figured out the scrap of fabric left over from my Arum dress would be just big enough—well, sold.

I traced off the 3-month size, but using the 6 month leg and strap length. The legs still seem insanely short, but I imagine that has everything to do with how long it’s been since I had a baby to dress. Oddly, the pattern doesn’t suggest you make the straps adjustable. That seems like an obvious omission.

A hunt through the thread stash didn’t turn up any topstitching thread a good colour, but apparently I do have a 500-m spool of dusty pink regular thread. Don’t ask me why. (It’s not even one of the many spools of dodgy ancient inherited thread!) So I fiddled with my Elna and managed to slightly lengthen the triple-stitch setting, and voila! This is when the Elna’s ridiculous speed really comes in handy—even doing triple-stitch, it moves along at a great clip and doesn’t make me want to stab something. The only downside is the limited needle position control, which makes fine-tuning your topstitching distances tricky. I did all the topstitching with a 1/4″ foot, which was not bad but my edgestitching is a little more wobbly than I’d like. All in all, though, everything went well, except that every once in a while the Elna bobbin seems to start catching on something and then everything snarls up and you have to rethread the whole damn thing.

I haven’t made a lot of overalls. Actually, this might be the first time I’ve ever made overalls. Anyway, I found myself a lot more reliant on the sketchy Burda instructions than I like to be. There’s some weird stuff around the hip closures. In particular, some of the pattern pieces didn’t have their names marked on them, just numbers, and the instructions didn’t always reference the number. And there are quite a few little rectangles and almost-rectangles that were tricky to differentiate. And I would’ve liked some indication of when to finish seams, from time to time. But on the whole it all went together fairly well. 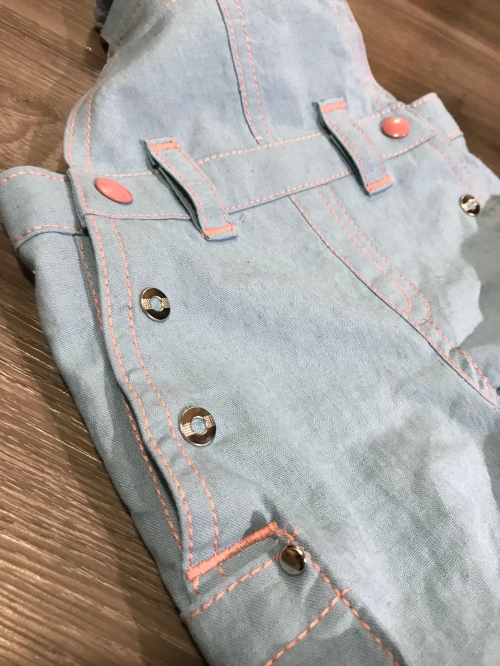 Things got a bit more off-road when it came to the hardware. My hardware stash is not nearly as vast as my fabric stash, and it’s actually getting a bit depleted at this point. I wanted heavy-duty snaps for the waistband and lighter ones for the rest of the closure. The pattern called for some cute little alligator-type clips for the straps, which I did not have, nor was I willing to venture out into our current blizzard to see what I could obtain locally. So I opted for D-rings and more snaps. Sturdy, but maybe a bit bulky, especially since I wanted the straps to be adjustable so I included extra back-snaps.

My stash of heavy-duty snaps came mostly from a thrift store acquisition of vintage snaps that have some cool colours—including three with a dusty pink finish that was perfect with my topstitching! Except that I only had three. And this vintage set was missing the back most pieces, which means I have to use extra snap fronts on the backs, too. Probably nice against baby skin, but it means I’m going to have a lot of extra snap middles when I’m done. I used lighter-weight snaps for the rest of the side closures, and added rivets at the pocket corners. That was probably the most annoying part, as there was something like 12 layers of fabric at the pocket corners. My silver rivet posts actually weren’t long enough, and I had to swap them out for longer black ones on the inside. Not visible, happily, unlike the mishmash of snap colours. I’m mostly just happy I managed to use those pink snaps, though.

There are a couple of other little details I meant to add but didn’t. I had some pink grosgrain to make a little tab sticking out of a pocket, and a teeny D-ring hanging from below one of the useless belt-loops would’ve been adorable… but I didn’t remember, and the cute factor is pretty high, anyway. So we’ll call it good, and hopefully baby Tessa (or at least, her mother) will find them as adorable as I do. I’m really excited about this baby shower, as I’m pretty sure most every gift will be hand-made. It should be great!

My god, did I mention these are cute?