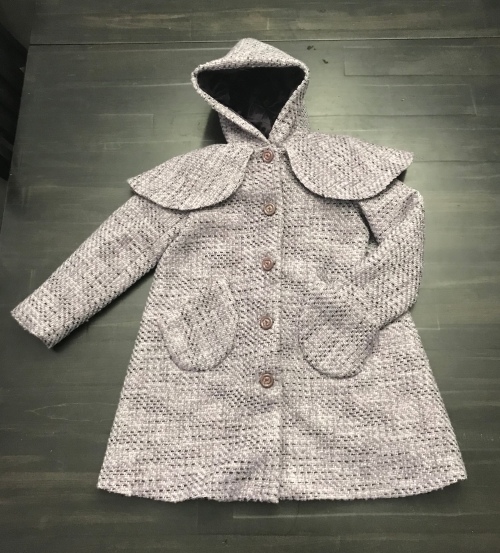 The final installation in a great (?) Sewing trilogy!

A long time ago, when I was new to sewing and really excited about coats (I made at least five that first year), I bought quite a lot of this pretty purple bouclé, more or less with my children in mind.

And then suddenly my children were no longer into girly pale purple anything, and I kinda missed a similar window for my nieces.

But when my dear friend Ada finally caught up to me in the reproduction department, I finally got on the ball. I made a teeny tiny jacket for her infant daughter. 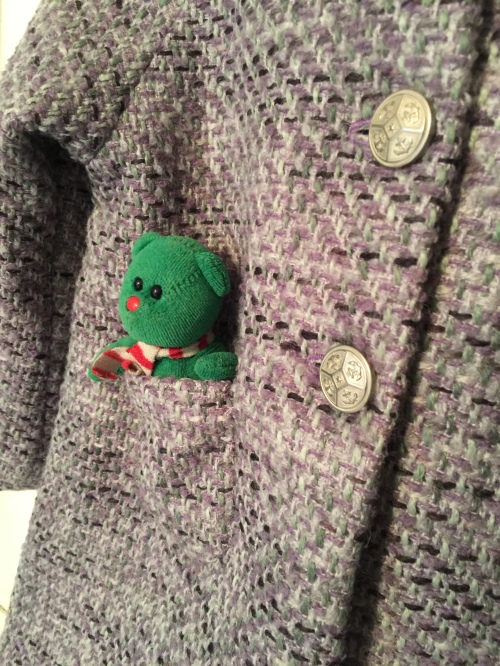 Then I made another a couple of years later.

And now, as her daughter starts kindergarten, I felt like it was time to use up the last of this fabric. It’s felt like a fun tradition, at least on my end, and I was ready to make the third installment in the trilogy. I just needed to decide on a pattern…

And then I got the mystery pattern.

Back in the summer, I got a donation of about a jillion vintage patterns from a friend of my sister-in-law’s mother. Many of them were old mail-order patterns , with the recipient’s name on them. The surname was the same as one of my co-workers at Fabricland. I asked her and, yes, these were her grandmother’s patterns! (Because there are seriously like five people in Saskatchewan.) I also asked if she wanted them, which she declined. So there.

Anyway, amongst the Simplicity and Advance and mail-order Marian Matin Patterns were a few more idiosyncratic bits. Pattern pieces traced out on newsprint, old flyers, and even some old government land-grant paperwork. (I showed that one to my co-worker, she said, oh, I know what land that was!) 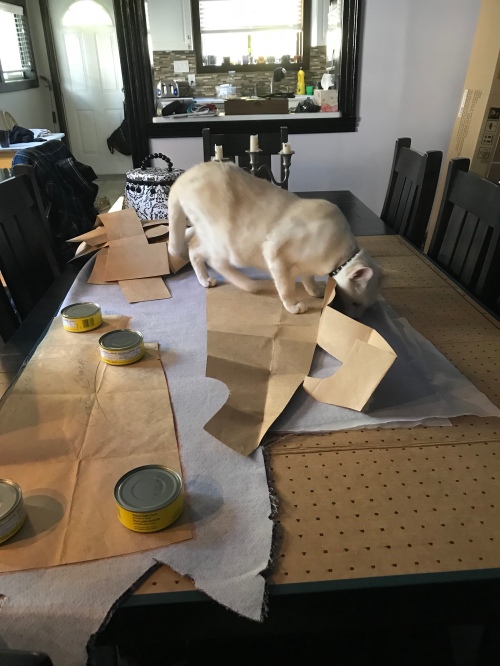 And one stuffed in this envelope that had something to do with an old water heater, for a child’s coat, traced out on a brown paper so heavy it might as well be oaktag.

I must admit, patterns like this fill me with a burning curiosity. What did it look like? Who was it made for? The traceout doesn’t include any company, pattern number, or for that matter size, information. I’m guessing it’s about a kids size 6, maybe 8. It’s a straight, A-line coat, and includes both a hood and a little capelet for the shoulders. There were lines drawn for pocket placement, but no actual pocket piece, so I created one.

My co-worker assured me that her grandmother was unlikely to create a pattern entirely from scratch, so it’s presumably traced off a commercial pattern—maybe a much loved one that was falling apart, maybe one that belonged to a friend.

There are a few helpful notes on the pattern, showing where to ease and details like a zipper for the top of the hood (that one I skipped). It’s a nicely drafted pattern—two piece sleeve with easing at the elbow, shaping on the facing for turn-of-cloth at the roll line. 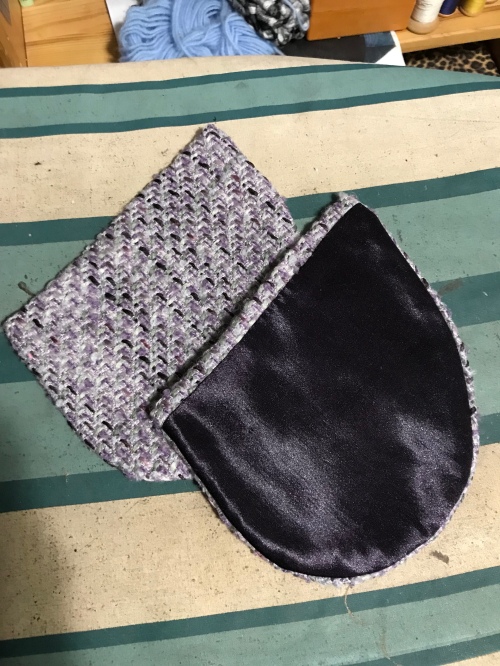 For the previous two coats I used an ivory Kasha lining, but if I have any of this left in stash I can’t find it at the moment. I could, however, find a nice big chunk of this dark purple. It seemed like a nice option for a slightly more grown up little coat.

Another feature of the previous coats, that I didn’t want to skip was the quilted lining. In the past I used flannel, but the quilting doesn’t really pop, and I had some leftover bamboo batting that I wouldn’t mind getting out of stash, so I used that. It turned out a nice weight.

This is where production really slowed down. I’m not going to say I put a TON of thought into the design, but I did have to stop and think about what I wanted to do where—which areas were going to be standard quilted, which ones were going to be free-motion quilted. FMQ is not my strong suit, but it’s the most fun there is in quilting, IMO, and it is well suited to creating the motifs I wanted.

As with the last coat, I went with ocean imagery, as I knew this would tickle my friend and her husband’s fancy (and let’s face it, this is really about pleasing the parents, not the kids.) I wish my line-echoing was not so terrible, but it’s fairly fun doing it, at least. 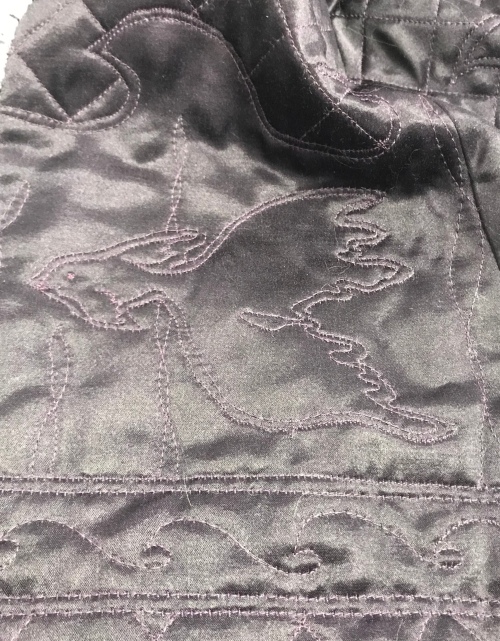 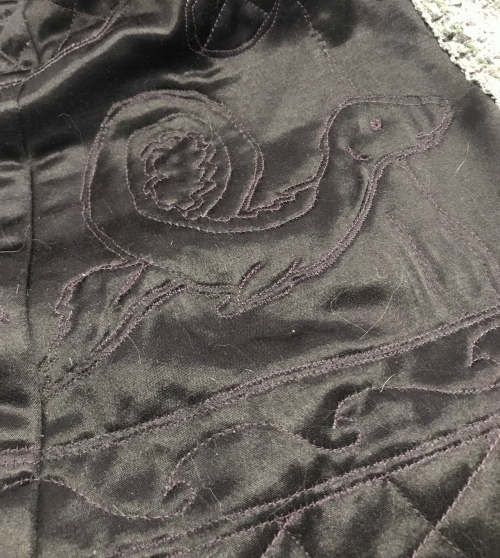 I was going for eel, but I ended up somewhere near Loch Ness Monster, I think. Oh well. In hindsight I should’ve done a killer whale, for these west coast people, but I wasn’t sure my skills would’ve been sufficient to keep it distinct from, say, the shark. The art of the possible, right?

Other than that, the construction was pretty unremarkable. All of my fabric was blockfused, so I forgot to add more interfacing to the facings, so they’re a little floppy. The buttons are a little boring, but they’re vintage and, more importantly, from stash. 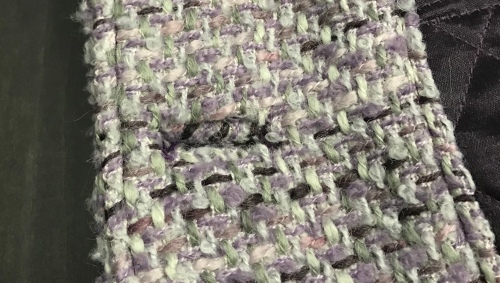 I hand-stitched the hem, the pockets, and the inside opening of the bound buttonholes. The latter, especially, took forever but it’s much less terrifying than trying to mark and machine squares and hope that they’re in the right place.

I haven’t said much about the capelet as there isn’t much to say—it’s part of the pattern and cute, one piece fitted with darts at the shoulders. It plus the hood, which is gathered to fit, made for some seriously bulky seams at the neck, and I have never been so happy with my Janome as the way it chugged through them effortlessly. There was much, much grading of those seams. 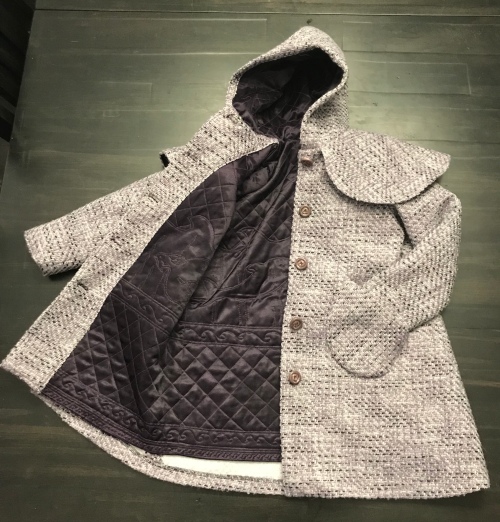 At the end of the day, there are some rough spots, but I’m pretty satisfied, and I know Ada is over the moon. I just hope it fits, or will fit fairly soon.

It wasn’t a speedy make, but it was fun to pick it up when I wasn’t sure what else to work on, and then put it down again when I needed to ponder something. And it’s done, with plenty of time to ship it out there for Christmas!

Except that I suck at shipping things, so we’ll see how that works out.

11 responses to “The Purple Mystery Coat”