Tyo’s costume this year was both simpler and more frustrating than Syo’s. Simpler in that she had it picked out early, it required making a single piece, not three or four, and I bought a marked-down twill for it so no precious or sentimental fabric was sacrificed. Frustrating mainly because Tyo didn’t prioritize the making of it, so she kept making other plans and disappearing, and I was not prepared to sew it all for her, both because she’s old enough to do it herself and also hello, fitting. But mainly the first reason.

In case you’re wondering, she’s a Top Gun pilot. I believe she went with “Goose’s granddaughter”. She bought the patches, but was unenthused by the “girl Top Gun” costumes (one was a stretch Lycra flight suit, the other was a mini-dress version). She wanted coveralls, but that fit her.

The first tricky bit was the pattern. A dig through my Burda mag stash (thank you, Zena!) turned up a few jumpsuit possibilities, but nothing that would work in my heavy twill. (Maybe not the best fabric choice, but I’d already bought it at this point.)

Next best would be a combination of a high-waisted pants and a shirt pattern. I had made her Burda 6849 in plaid flannel a few years ago, which seemed perfect, and I found a pants pattern fairly quickly in my pattern database. Unfortunately, my intermittently-meticulous pattern organization failed me, and I couldn’t find either pattern. I think I maybe lent the pants pattern to a friend a couple of years ago. I have no idea where the Burda shirt has gone. Obviously some Quality Assurance* activities are in order.

(*My day job is at a government lab and QA is an obsession to the point where it’s alternately hilarious and ridiculous.) 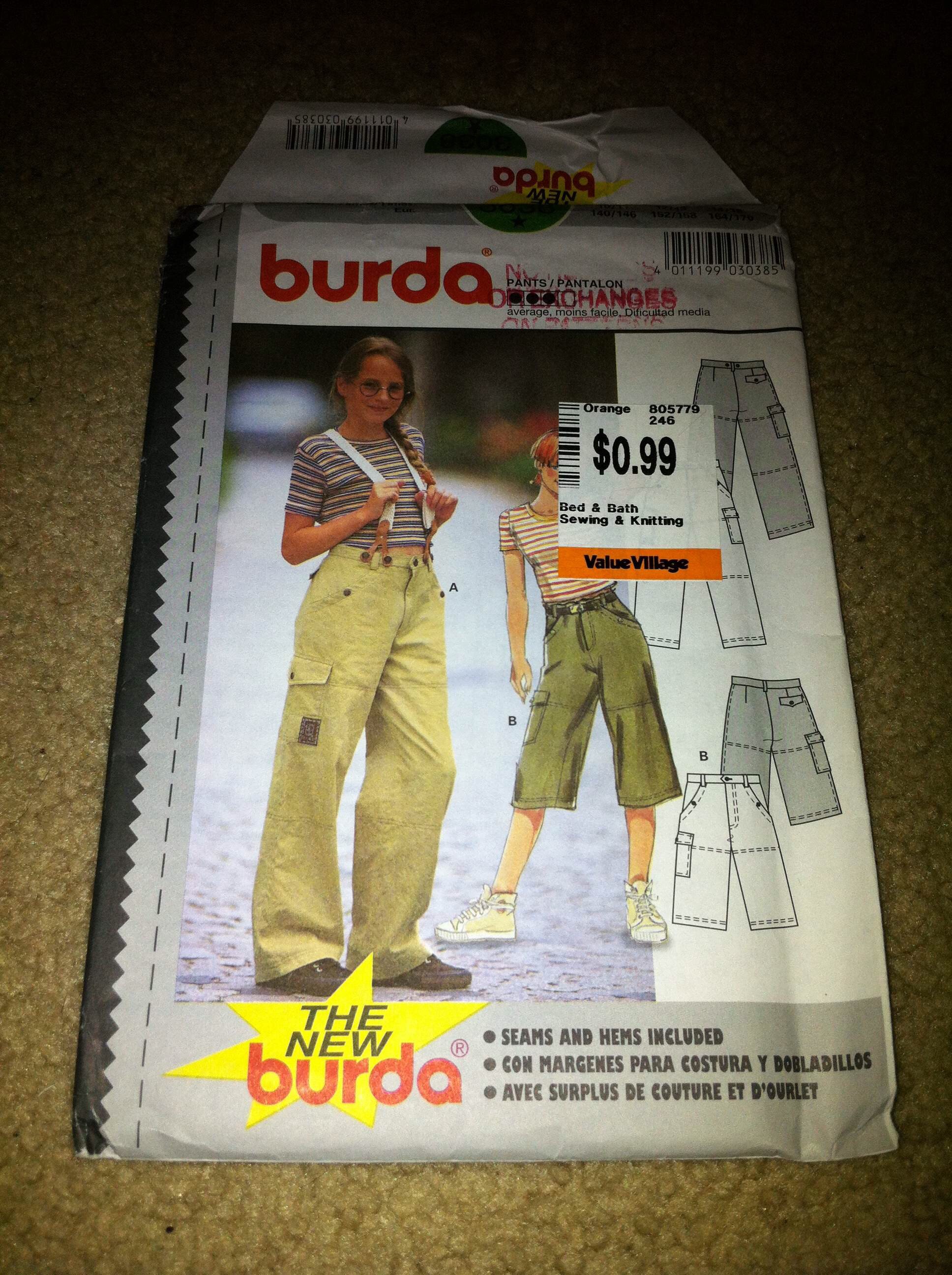 Anyway. Obviously plan B was in order. A further search turned up Burda 3038, above, which had all the required style elements—except that it’s a young junior size range. It goes up to a 37” hip, which is close, but, um, the drafting was definitely for a preadolescent body.

I raised the back rise a bit over an inch, doubled the size of the back darts, and added a bit of width to the hips. I should’ve added a bit more to the hips, but all in all it worked out surprisingly well. I’m not saying they fit “well” for pants, but, well, they fit!

The rise would be great as pants, but was not quite as high as I was hoping for for coveralls. But since we were on a project-runway style deadline, we made it work.

Oh yeah, deadline. Because my darling, sociable seventeen-year-old couldn’t make herself stay home long enough to work on it until the day before Hallowe’en. Aside from tracing out the patterns, this was entirely cut out and assembled on Oct. 30 between 4:00 and 11 pm. Which is well past when I need to be in bed, by the way. 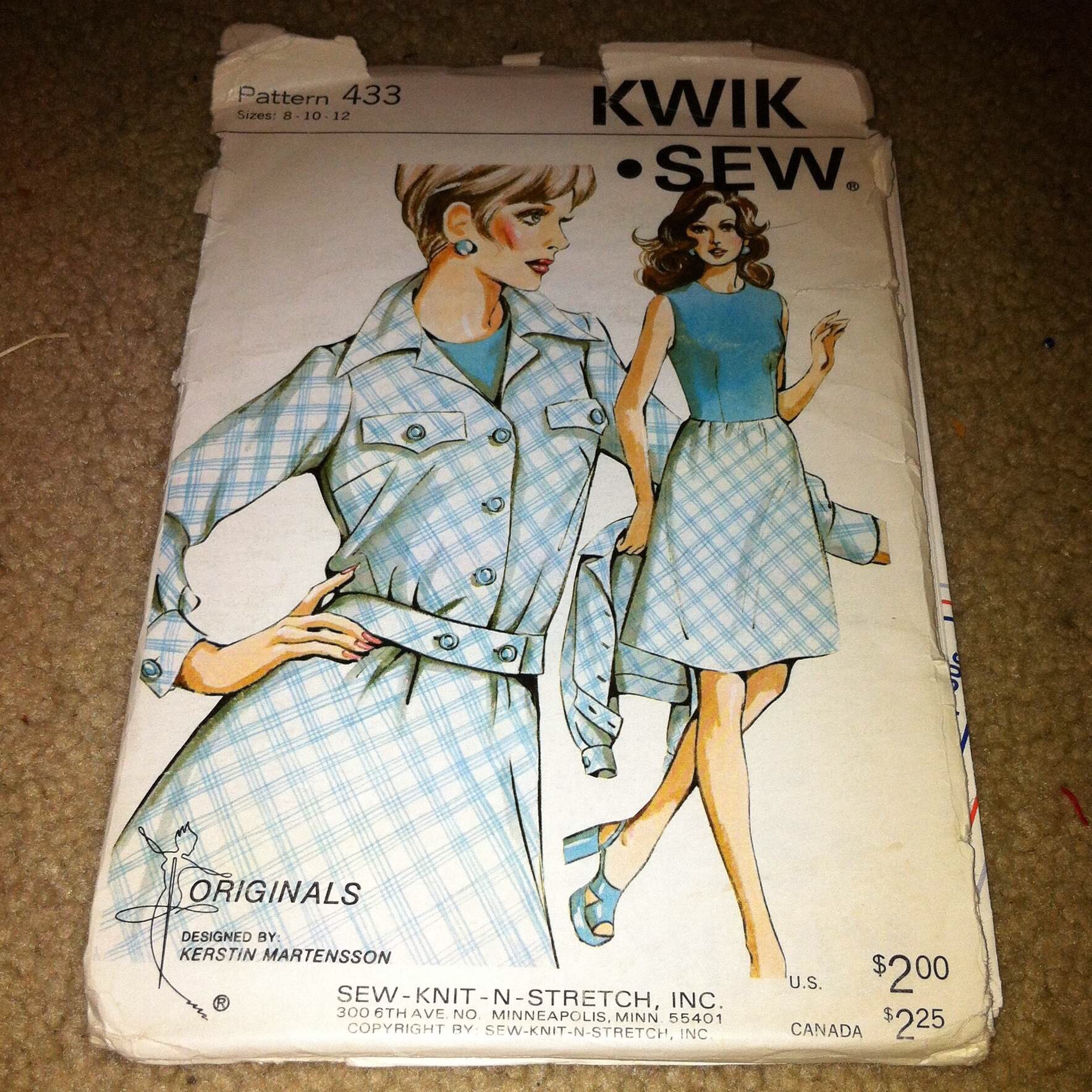 Since I couldn’t find the shirt pattern, we fell back to Kwik Sew 433. Tyo had made this before for an unblogged Terry Bogard cosplay, so it was traced out and I knew it would fit. I added about 2” in length to the body, to accommodate the whole “it’s a jumpsuit now” thing. I also added a small tuck on each side of the back to make the waistband fit. It was a very small tuck—I could easily have taken the width out at the side seams or something.

And, by some miracle, it all worked. I thought maybe I added too much length at the back, but then she sat down. Less in the front might have been possible, but I don’t think it’s a problem, really. 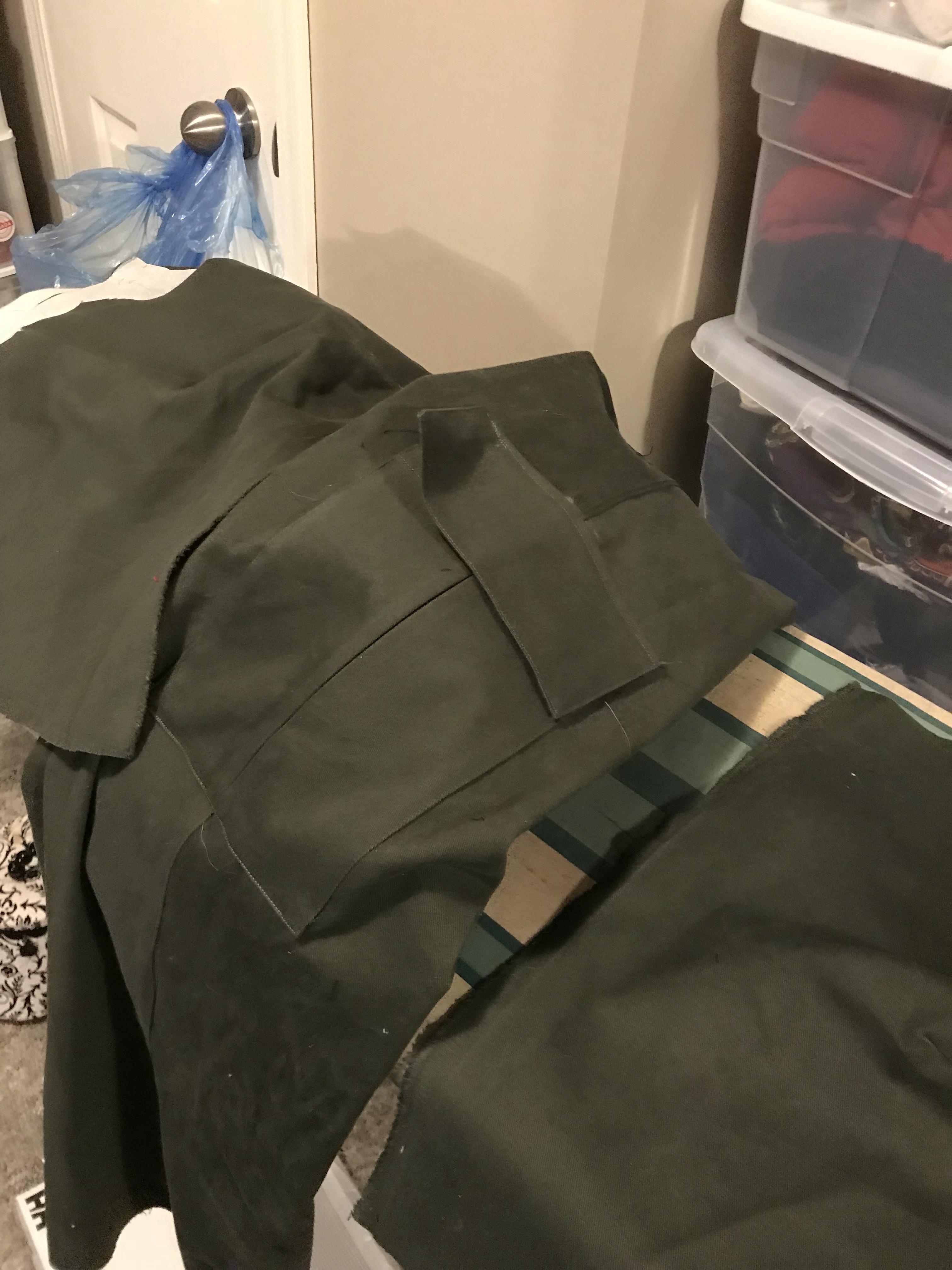 I tried to make Tyo do most of the work, but as the evening wore on and time grew short I wound up doing more of it. So she did the cutting out, and constructed the pants (including cargo pockets!) mostly on her own, but I did all the sewing for the top except the darts. Fortunately I noticed that the KS seam allowances for the jacket/top were only 1/4” BEFORE we sewed anything at 5/8”, which would’ve been both hilarious and painful. I did manage to insert the zipper inside out. 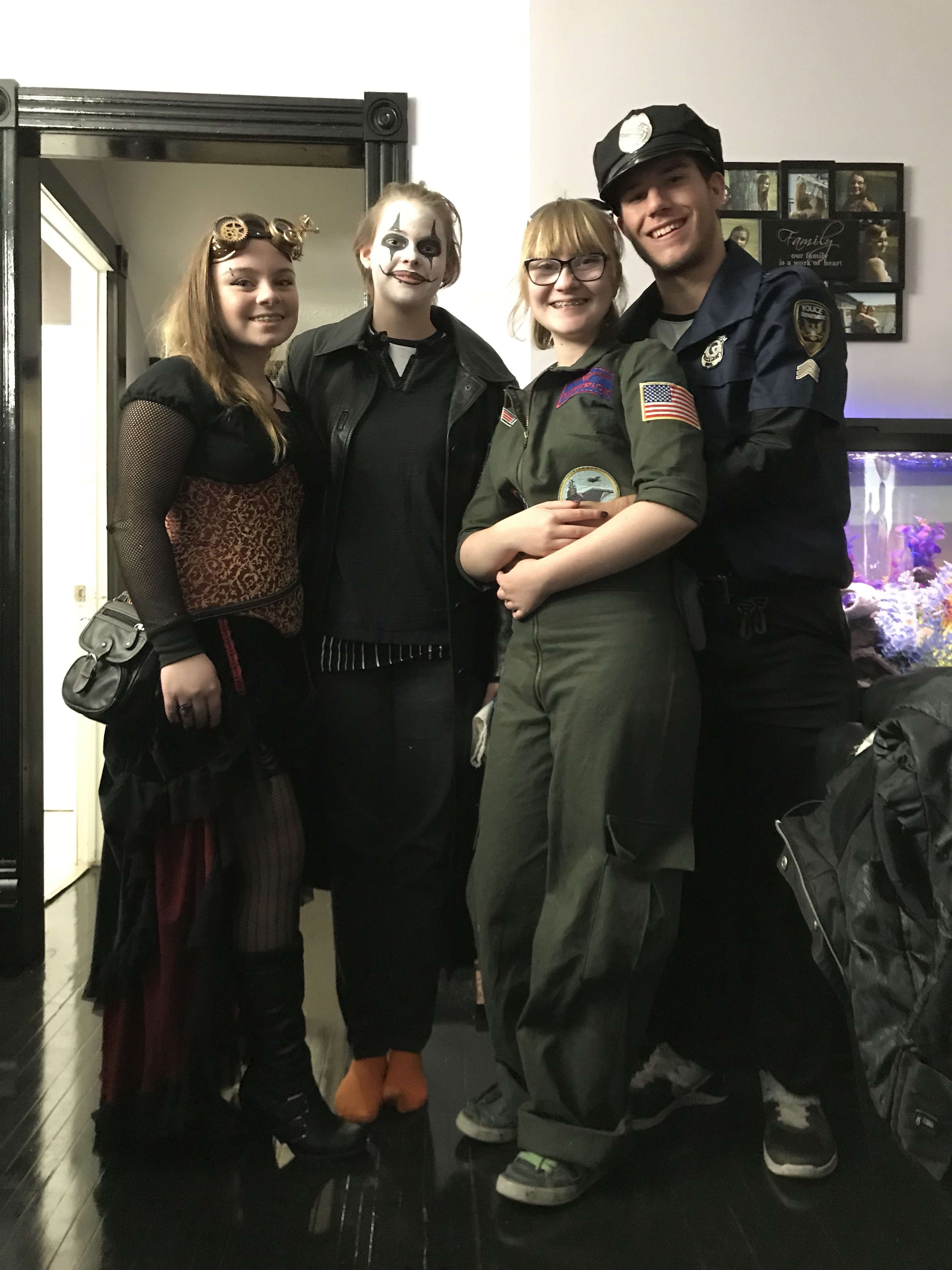 You may have noticed the cuffs at both sleeve and pants hems. This is because both are unfinished. And yet, sometimes that’s good enough. She can finish those for next year, when it gets reworked into a ghostbusters costume.