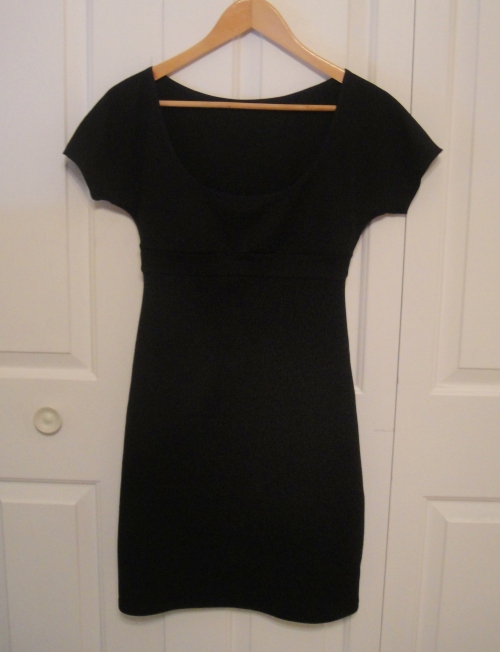 I couldn’t stop myself. I made another Jalie 3024.

The part where it only takes about two hours from first cut to hemming helps. This version is made of a heavy ponte, which I managed to nab a remnant of the other day. (It being prohibitively expensive otherwise.) I love that I can make this dress from a 1m remnant with room to spare. I made the neckline scoop a little lower this time (I think I overshot a wee bit… Maybe 1/2″ higher next time?).

Here’s an overexposed view of the front so you can maybe kinda sorta see the detail, not that it’s a surprise.

I finished it with some more of the narrow fold over elastic Mary of Hey Beautiful picked up for me in one of those rare and perfect moments of internet/real world synchronicity. It’s perfect. Thank you!!! Of course, it’s also black, so all of my attempts to photograph a closeup failed miserably.

Back view. Of which you can see absolutely nothing!

No back-seam on the skirt this time, just swayback wedges removed from the skirt and bodice pieces in the back.  It’s not overly smooth in the back, but tolerable. I also took it in under the arms a wee bit, as it was sticking out in the heavier fabric. It’s an easy dress to alter. My husband has been mourning the absence of a little black dress from my wardrobe for over a decade now, so he’s actually quite approving of the make. 🙂

And then I made another. This one in a blue knit advertised as “crepe,” although it’s really a heavier knit with one side that’s textured to vaguely resemble crepe.

Playing with textures, which you can’t really see. (Tweaked to show the actual, royal blue colour. I HATE INDOOR LIGHT.)

The other side is quite shiny and spandexy. I used the shiny side for the waistband and the neck binding on this version. I like the contrast, subtle as it is. To reduce bulk, after I put the first pass of the binding on, I trimmed the binding’s seam-allowance close to the stitching line. This definitely reduced the bulk—here’s hoping that it doesn’t result in a binding failure later on. This knit is stretchier (especially lengthwise) than the pontes I’ve been using, so I made it up more-or-less as the pattern dictates, aside from my scoop neck (I had a wild moment where I thought about hacking a cowl neck, but those can be pretty hit-or-miss and I love a nice, wide scoop of pretty much any flavour. Maybe next time.) 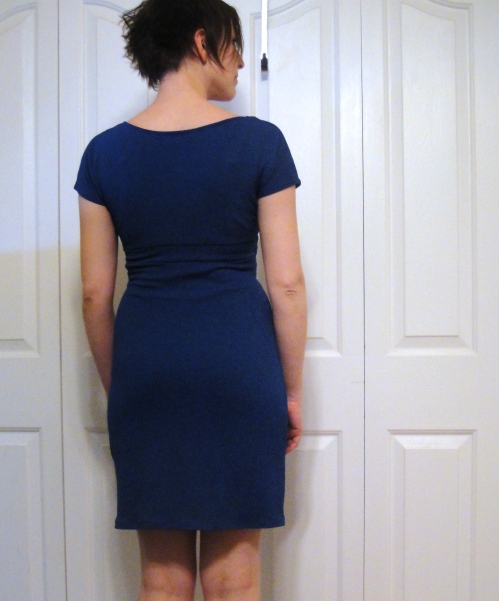 I thought I made my swayback adjustments even more extreme, but it’s still kinda bunchy. Doesn’t bother me in the actual wearing, mind you, since I can’t see it. 😉 Because this is a clingier knit than the others (even though it’s still quite heavy), I had a bad moment while trying it on where it was clinging to every lump and bump in a way that was not a good look at all. Then I threw my Gertie slip on underneath, and all of a sudden everything was just fine. YAY! Which reminds me, man I love that slip.

I still want a red one, and there are some scuba prints at Fabricland that would be absolutely to die for in one of these and why didn’t I scoop some up last month when they were 60% off?!?!?! But I think I may be close to being satisfied… maybe… 🙂