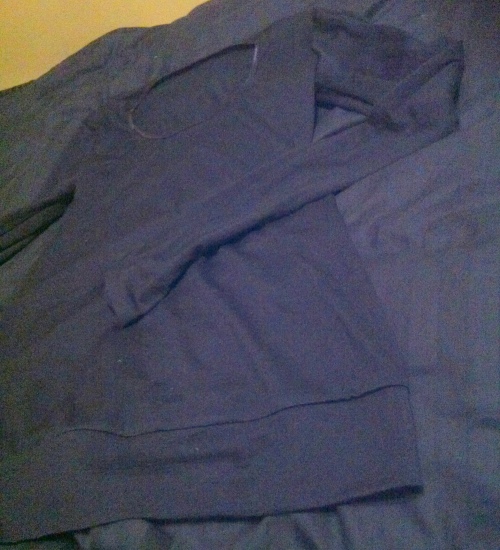 Over the holidays, I finally egged up and cut into one of the merino wool knits Steph of 3 Hours Past bought on my behalf last winter, since they are apparently abundant and luscious down under. Unfortunately by the time the postal snails got the fabric to me, it was spring, and I figured I had better wait until the weather gods were speaking Woolish again. Though really, I shouldn’t’ve waited, because now winter is half gone (hopefully) and there’s still three other pieces not even cut into. Anyway, I agonized over what to do with this beautiful, lightweight black jersey. I BELIEVE it’s the same stuff Steph made her Little Black Red Velvet out of, which is absolutely delicious, and I was sorely tempted to imitate her completely. Sadly, at the last moment, I choked, and took the safe route—I made up yet another version of my knit sloper. This means that, aside from being wool and not cotton, it’s functionally identical to the two black knit tops I made WAY BACK when I was first working out the kinks of the pattern. Both of which are still in rotation, by the way, although one has seriously gibbled shoulders and the other one, which may never have been blogged, has a teeny, mended hole that really annoys me whenever I find it (although I usually can’t find it, which is why the top remains in rotation.). I managed to finish this top just in time to go back to work, which, combined with a vicious dose of Saskatchewan Winter (which had been remarkably mild through most of December), meant that I actually wore all three black shirts three days in a row. And then had to explain to everyone, by the third day, that no, it actually wasn’t the same shirt three times.

I am happy to report, it makes a pretty damn yummy shirt. The merino isn’t as soft as cotton or rayon to touch, but it ain’t bad either. At least, I don’t find it itchy, though I’m not particularly sensitive to such things anyway. I added a band to the hem, because I love that finish, and I used 1/4″ fold-over elastic to finish the neckline.

For those of you who are epically long-haul readers (and have really, really good memories), you may realize how much of a triumph that actually was. I purchased a small shitload (I think about 4m?) of this stuff maybe three years ago from the random-fabric-dive in Cow Town, and I’ve mangled pretty much every attempt to use it, fairly badly. It’s not pre-folded… I talk about one attempt to use it here (but was too traumatized to actually show the tank-top) and I used it on this tank-top for me, which is at least wearable if not pretty, and gets regular use in the PJs-and-undershirts rotation. But I’d never been able to get it go on in one pass, and a second pass just mangles it pretty badly.

While musing about how to finish the neckline for the merino top, I ran across the last metre or so, lurking sulkily amidst my elastics. And I was thinking about how to apply it in a single pass, as seems to be preferable (I’m pretty sure Cloth Habit has a post on applying this stuff somewhere, but I couldn’t find it). Anyway, I was trying to think about sewing machine feet that would help, like a binder, with folding it over for me. Almost like what a rolled-hem foot does, but without the extra roll.

Well, in hind-sight lightbulb. I did a wee bit of testing, and discovered that, miraculously, yes, it did work. I started with just the elastic, pinned closed, and took a couple of stitches, then lifted the foot and arranged the elastic so that the bottom was flat and the part that needed to fold overtop was protruding through the slot in the flat-fell foot. (Bad description? I think the photo is probably better than anything I could say.) Then I tucked the fabric into place, lowered the foot, and went to town. Beyond that, it was just a bit of fiddling with getting the tension right, and the length/width/position of the zig-zag I used to apply the elastic. (I did shift the zig-zag slightly to the left to get it right at the elastic edge.)

Can you see it any better? not really.

Can you see it? Not really.

and on me—even flatter. 🙂 There are a couple of wrinkles when it’s loose, but nothing I’m going to whine about. It’s on, and it worked.

And, now I’m completely out of that kind of elastic and the only stuff we have locally is single yards in packages at Fabricland that cost an arm and a leg. Argh. And with the dollar doing what it is, I have zero desire to order anything that has to cross international borders. >_<

But at least I have a pretty sweet (if completely boring) shirt.

Leave a Reply to Heather (Thing I Make, Plus Rocks) Cancel reply