Me and my girl.

Tyo is going to be 14 this summer. This means, and doesn’t mean, all kinds of things, but in particular, she’s finishing grade eight, which around here is the end of elementary school. Next year is high school, in all its iconic glory*. (I’m not sure who’s more scared, she or I. Okay, it’s her. I love watching my kids hit new milestones—it’s my favourite thing about parenting.)

Anyway. Tyo’s friends have been bugging her to wear a dress to grad. Tyo would just as soon go in jeans (preferably ripped), but she concocted a compromise. She would wear a dress, if I would make her one. Isn’t it great when our teenagers come up with a reasonable compromise? I know!

Oh, one more thing. It must be made out of Avengers fabric.

Challenge accepted. Confession: having never made a grad dress for myself**, I’m kinda excited to make one for my daughter anyway. Avengers fabric just puts it into the awesome category, though. The only downside is that I can’t, quite, steal her clothes yet.

Sadly, my local fabric stores are not hotbeds of superhero activity. Ok, the odd Batman fabric does show up. eBay, however, turned out to be a treasure trove. Tyo picked a very old-school, garish print. Perfect. The original price of 6.99/yard seemed quite reasonable, although shipping and that pesky conversion from American dollars nearly doubled it. Still not bad, though. What arrived is not the finest of quilting cottons, but perfectly respectable. 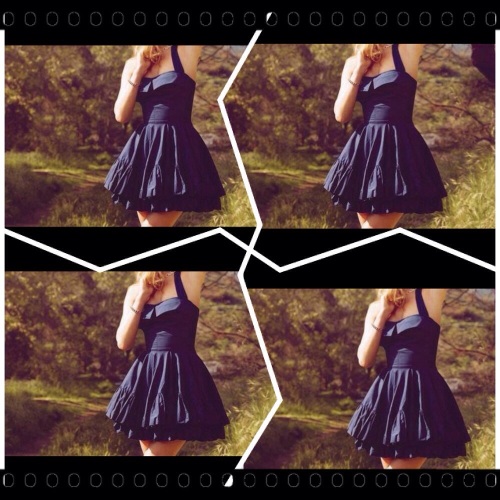 Tyo sent me this pic way back last summer as an example of a dress she wouldn’t mind wearing. So with that as our inspiration, we thumbed through my pattern database. Sadly, she was not going for McCall’s 4778.

No? Not even version B?

But she did eventually bite on McCall’s 6331: 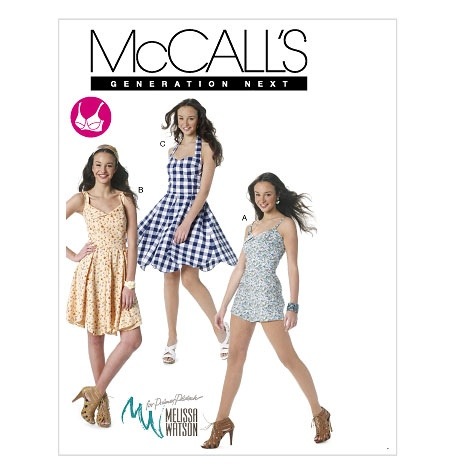 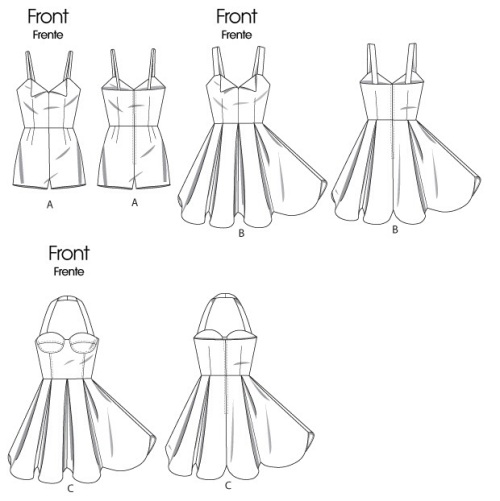 View B, without the bustier cups. Tyo may someday embrace things like bustier cups but, fortunately for my reflexively-prudish-parental-nerves, she hasn’t yet.

We finally made up the practice version last weekend. I say finally because I have literally heard nothing but “When are we making my dress?” for like a month straight.

You will note some changes have been made.

In terms of fit, I traced off the Misses’ size 8, to match her bust, in the A/B cup size, and shortened the bodice by a good 3 cm, since her back length is nowhere near the 16″ the patterns are drafted for. Then I added that length back on at CF, in a kind of a reverse swayback adjustment, lengthening the front rather than shortening the back. This is my daughter, after all, even if the booty is all from her dad’s side of the family. I won’t exactly say the waist is level with the floor, but at least it’s closer. 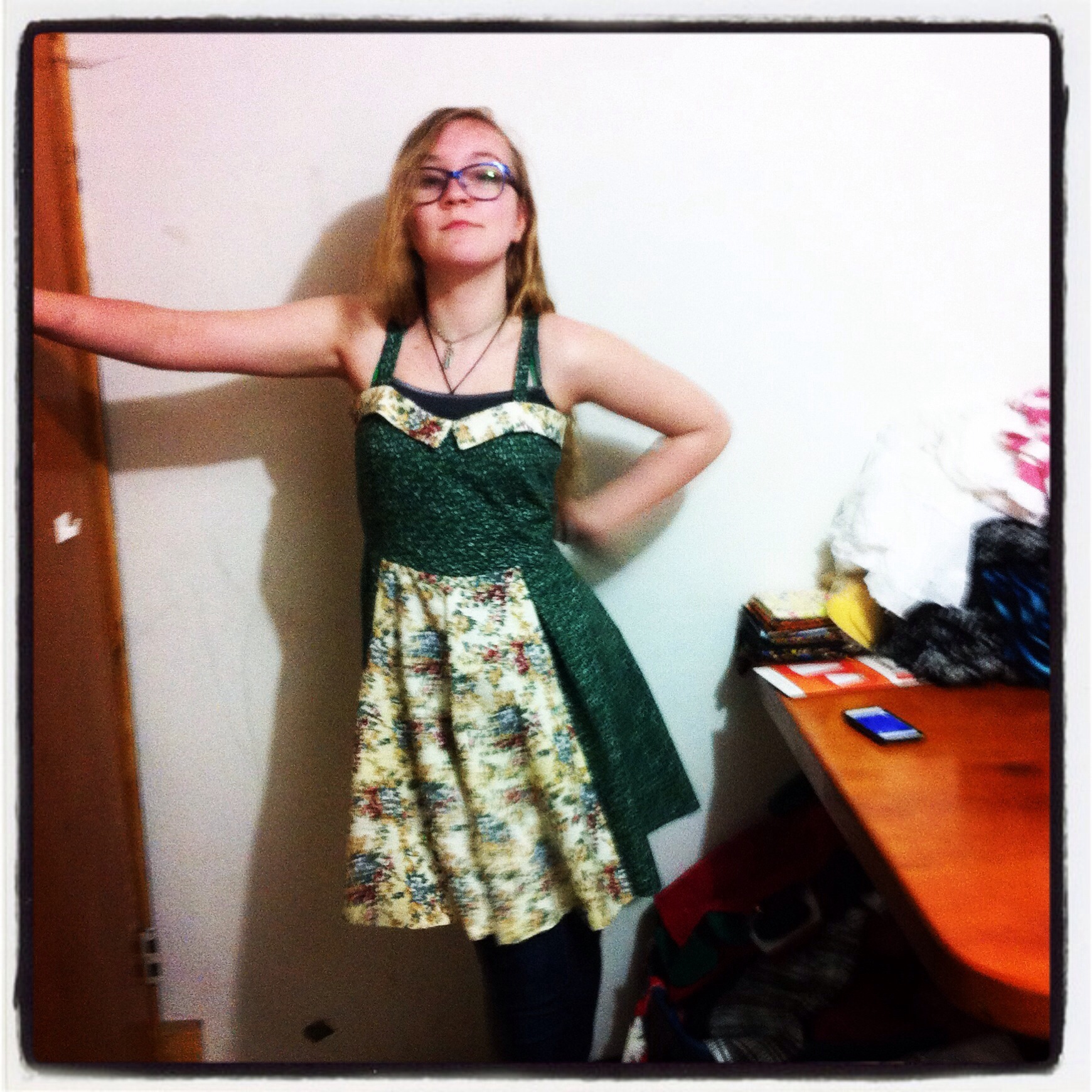 Originally we were going to keep the cute little collar-like flaps on the front of the McCall’s pattern; not quite the inspiration dress, but it seemed like a neat detail to me. But when it came time to test the straps, it was clear that they were too far set for her narrow shoulders (those she does NOT get from me. OK, really the list of things she doesn’t get from me is much longer than the things she does.) And because of the nature of the fold-over, moving that point inward shrank down and threw off the shape of the little triangle and it just wasn’t working. Grum. So, back to the drawing-board. Or the cutting table… a few snips and the folds were eliminated, the points reduced to a gentle curve. Bonus: without the fold-over, it became much easier to cut the front on the fold, eliminating a seam. I must admit, the little sundress-collar-thingies are just about my favourite detail for a sundress. I probably over-use them, like an indifferent novelist who has the same character recurring under different names in every book.

Oh, and the original skirt pattern has these cute scallops to each panel. Yeah, that ain’t happening.

Did I mention Tyo sewed the skirt seams herself? So helpful! Anyway, since I was using my Featherweight for the first time in months (it spent the winter at my Stylish sister-in-law’s house, in anticipation of coat-making that we never… quite… got to. 😦 ), and I had the nifty attachments like the adjustable hemmer, I thought I’d give it ago. With a little bit of adjustment and practice, I made a remarkably neat hem, just a touch over 1/4″ wide. Honestly, I’m pretty darn preening. I used all the tips people suggested in comments on my rolled-hemmer post, and they were very helpful—especially the trimming the seam-allowance when crossing seams one.

I actually kinda love how this practice dress turned out, even in the two different fabrics. I’m inclined to finish it (I need to practice my lapped zipper skills, anyway). Tyo assures me she will even wear it… next time someone has a garden party.

Although I suspect that is teenager-speak for “Never in a million billion years, mom.” 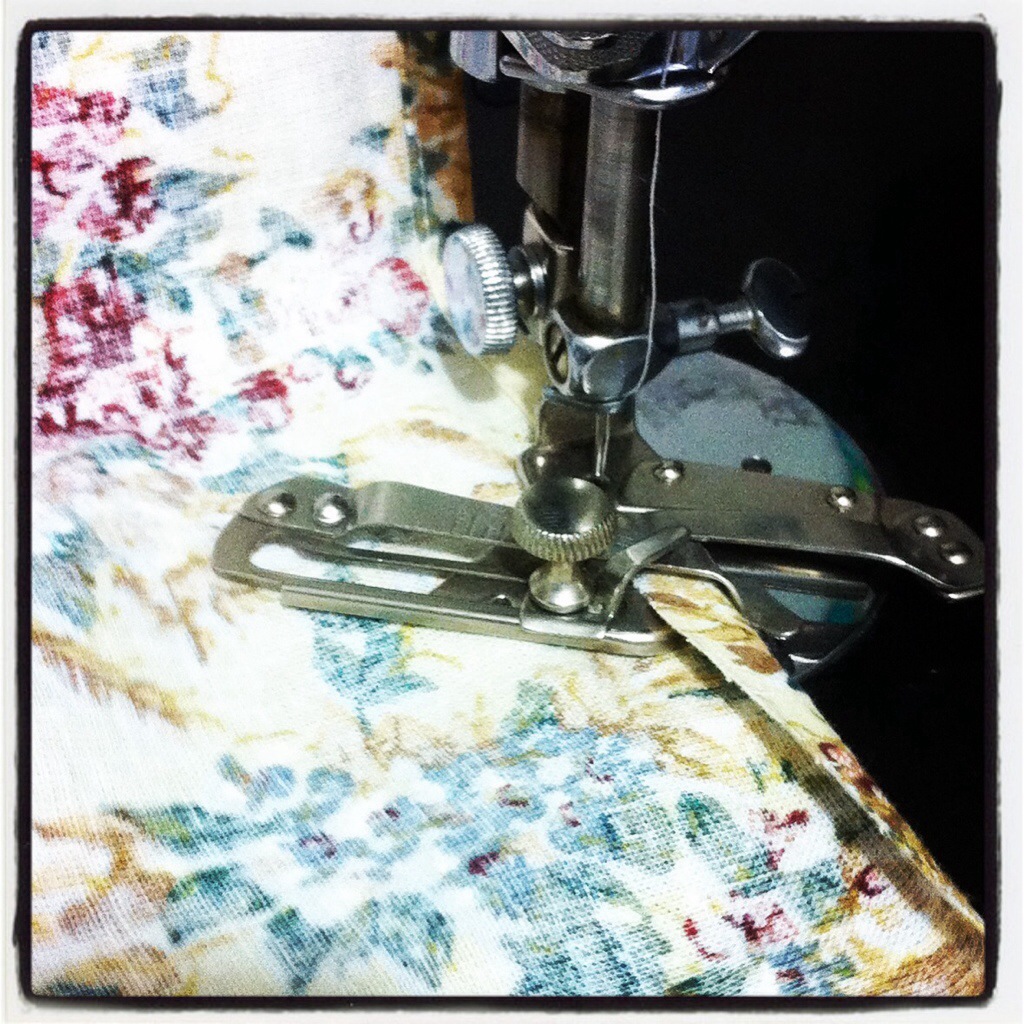 *Yes, the Breakfast Club has been watched.>
**I blogged about my gr. 12 grad dress, here. Spoiler: my mom made it. In 1970. My gr.8 grad, on the other hand, did not involve home-stitched anything. I wore a souvenir blouse my father brought back from a trip to Montreal (a foreign and exotic land,) and one of those lightweight cotton broomstick skirts that were all the rage in the early nineties. It was a beautiful skirt, and I held on to it for years after, until, early in blog-hood, it became a part of this dress.