So I wanted to make a slip. OK, frankly, I’ve needed a new one for a few months now. The beat-up old blue storebought one I have (which I’ve had longer than  I’ve had my husband, having purchased it in the golden age of vintage shopping, aka the 90s) broke a strap not long after Christmas, and I’ve just been pinning it in place for lack of a better option. Because if one wants to wear a dress, in the winter, in Canada, a slip goes a surprisingly long way towards making a ridiculously-not-warm-enough outfit just borderline wearable. Especially when it facilitates the wearing of thermal tights. And I really, really, really wanted to make Gertie’s new slip pattern, because, well, ERMAGERDCUTE. Confession: I really really wanted to make it just exactly like the cover, in black with cream lace. Although I knew I needed a light-coloured slip, badly, too.

Well, Fabricland had absolutely no plain, black, slippery, stretchy knit fabric. They did have the old-fashioned nylon knit (the stuff your grandma’s slips were made of. Ok, the stuff my dying blue slip is made of), but I didn’t think that would work for this particular pattern (I think I was right, by the way.) So instead I walked out with some ERMAGERDCUTE nylon swimsuit fabric, and half a metric ton of black stretch lace. And some ivory old-fashiong lingerie knit, but that’s another story.

So, you may have noticed how Gertie’s selling kits for her slip? That’s SUCH A GOOD IDEA. Because figuring out everything you need from the bloody teeny text on the back of the envelope is not. easy. I read it fifteen times and still missed half of it. Like the 1/2″ lace for making the front half of the straps. It turned out all right because I found a really nice lingerie elastic I wanted to use for the whole straps, but still.  I did remember the strap-sliders kit. I messed up on the lace pretty badly, but we’ll get to that.

Once I cut everything out, I decided to start with the briefs, since that seemed a little simpler (and easier to recut if I really screwed it up.) Which, by the way, I did. I wasn’t paying too much attention when I grabbed my lace—I knew it called for a couple of different widths, and just grabbed one wider and one narrower that I liked.

The wider lace was about 2″ wide. The pattern called for 1.5″. That 1/2″ is a big deal, as you can see above. On the left—great. On the right, um, not quite such a good look. Yes, I sat and picked that out. A frickin’ teeny little zigzag in swimsuit fabric. Did I want to kill myself? Only a little. On the plus side, once I had it all fixed, they fit like a dream; I did lower the front rise about an inch (a personal preference, I think), but the rear coverage was just right.

(PS, any of you who remember my last attempt at lace-trimmed undies, remember how wide I found the crotch after? You will not have that problem with this pattern. Teeniest little skinny crotch ever. Very comfy, although I wouldn’t recommend wearing pads with these. Also, the crotch-liner piece ends up pretty funny looking. Yeah, I also forgot to buy any cotton jersey for that. Fortunately I’m a fabric stasher and have enough white cotton knit bits kicking around for a small army of undies.)

I like Gertie’s option for using lace for the front of the straps (though I wouldn’t use a stretch lace, and I’m not sure this is specified, and the rest of the lace in the pattern has to be stretch), but I have been lusting after this lingerie elastic since it came in to my local Fabricland last fall sometime. You can just about see, in the photo above, the cool shiny/not shiny designs on it. I like. And clear plastic sliders and rings, because that’s really all Fabricland has. Silver would’ve been perfect.

Figuring out how to thread a slider for an adjustable strap always takes me a few tries and a lot of looking at an existing bra for reference. I started by sewing the rings on the back (opposite of how Gertie’s instructions have you do them, solely because I didn’t have the ornamental separate front portion of my strap.) But, I managed to get them on and the fancy side facing out. Also, starting at the back makes it much easier to get the strap length right when fitting on yourself. Although that’s not nearly as important for adjustable straps like these, anyway. I sewed my straps in two places, at the top of the lace and where the lace joins the main fabric.

I did the vast majority of the construction (everything but the side-seams) on my regular sewing machine using a zig-zag. The only thing I don’t like is the black zig on the white fabric on the inside—kinda highlights every little inconsistency in stretching, stitch-speed, and trimming. I considered using a white bobbin thread, but that might have shown on the outside unless I fiddled with the tension, in which case the black would still have shown on the inside. So I am sucking up the black. I won’t give a flying anything once I’m wearing it.

Fortunately, the way the pattern is designed lets you swap in pretty much whatever width of lace you like, because you apply the lace then trim away the fabric behind. I had to get more of my “narrow” lace (because that was working much better for most of the pattern), but I was still able to use the wider lace in a couple of places—under the bust and along the hem. I will note—there are a lot of different seam allowances in this pattern—none, 1/4″, 5/8,” and I think maybe a 3/8″ as well. I forgot to double-check and sewed my front cup pieces together with a 1/4″ seam allowance that should’ve been 5/8″. So my top front was too wide for my bottom front. Not figuring out what was going on until after, I just eased this in and went with it (which is easy with such a stretchy fabric), but it means my straps and darts fall just a little wider than they should. Not a big deal for me, but if you had narrow or sloping shoulders I bet it would not be great. 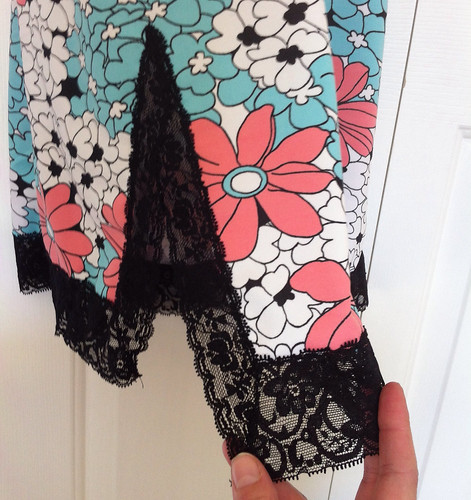 I had a lot of fun piecing the lace for this. It’s very basic. Overlap the lace in the shape you want. Zig-zag it down. Trim off the bits you don’t want on either side. (Optional: follow the pattern of the lace so your zig-zag almost disappears).

I didn’t do much to tweak the pattern, other than my reckless use of inappropriate lace. I made a slight shortening adjustment to the length between underbust and waist. I didn’t even attempt a swayback alteration on the back (it would essentially have ended up being a wedge taken off the top of the back piece anyway). I did grade out to a size 14 for the back skirt, because I often find the side-seams trend to the back for me (this is another side-effect of swayback, more than the actual size of my butt), and this did help a lot with the problem. To the extent that it is a problem, anyway.

Slip: back view, with lace. If you wanted to continue the lace panel on the back, you could just mark where the front lace would match up with it, sew the lace on top, and trim away the slip fabric behind it.

I really did want to add lace across the upper back, however. As drafted the pattern is kinda coffin-clothes, with all the lace (except at the hem) on the front. I just  removed the seam-allowance from the top of the back piece, placed and zig-zagged down the lace, and removed the fabric from behind. Now, stretch-lace does not make the sturdiest of finishes, as we’ve discussed before, which I’m sure is why Gertie didn’t put it all across the back. For a modicum of extra elasticity, I added some clear elastic right at the join of the lace to the back piece. I also chose to live dangerously and skip the really-skinny elastic supporting the edge of the stretch lace in the front. Probably not a good idea for the longevity of my slip, but I can always add it in later, when I learn the error of my ways. So I tell myself.

So, can I just say, I love this pattern just as much as I thought I would have? In particular, it’s drafted with the perfect amount of negative ease! (For my fabric, anyway.) As I said, I made my usual size 12, and I put it on, fully expecting to have to take in the side-seams (as one normally does with Big 4 knit patterns). NOPE! PERFECT! Snug through bust, easy skimming through the hips. YAAAAY!

It looks better on me

And if I do say so myself, it looks considerably cuter on me than on my dress-form. The only problem is, it may be too cute to put clothes over top of. In which case I suppose I’ve made myself a new nightie, not a slip. I guess I might just have to make another…