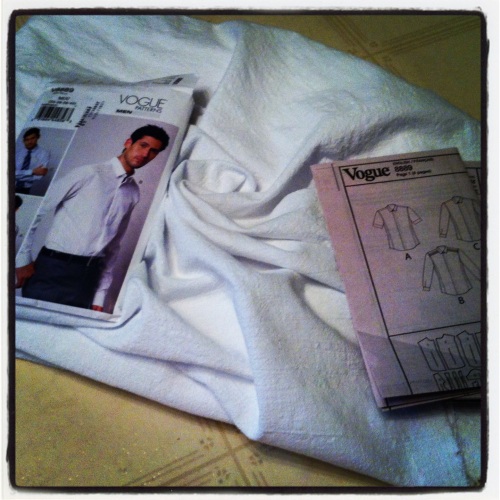 I got it into my head that I should sew Osiris shirts for Father’s day. Vogue 8889 shirts. Yes, two shirts. Because I’m braindead. I swear when I get these done I am not sewing anything for anyone else ever again. Oh, wait, there’s that bloody wedding dress. Shite. I hate myself, sometimes.

I’d be less grumpy except that I didn’t get ANY time to work on this last weekend. I meant to be done and on to the second shirt by now. I have a schedule here, peeps. But no, every second I wasn’t working this past weekend had to be spent barbequeuing with the family. Sheesh.

Stylish and her haul

AND then there’s Stylish, who’s grinning like the cat who got the cream because, well, she did. My father-in-law pulled a large box of old patterns from a neighbour’s trash, all for his precious baby!

Ok, so I really, really enjoyed going through these patterns with her. There were some gems amid a matrix of 80s monstrosity, mostly 70s, a fair sprinkle of 60s, and even a few 50s patterns. They are well-used, but seem mostly intact. And after she had picked out the ones she wanted to keep (some of which I am totally tracing off at some point, by the way), I got to go through for ones I wanted. 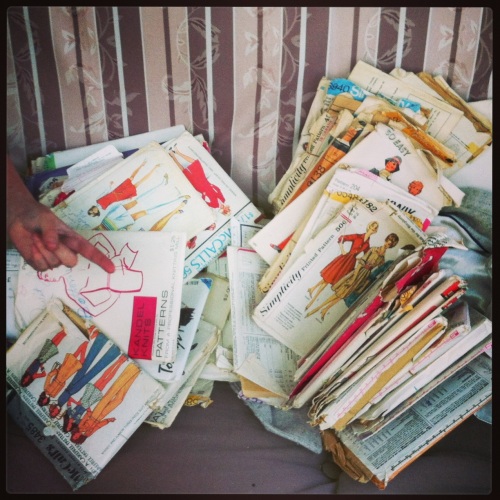 It’s possible that I kept more than she did… >_< Although she is definitely developing an eye for seeing past the cover art.

Anyway, weren’t we talking about a man’s shirt? Oh, yes. 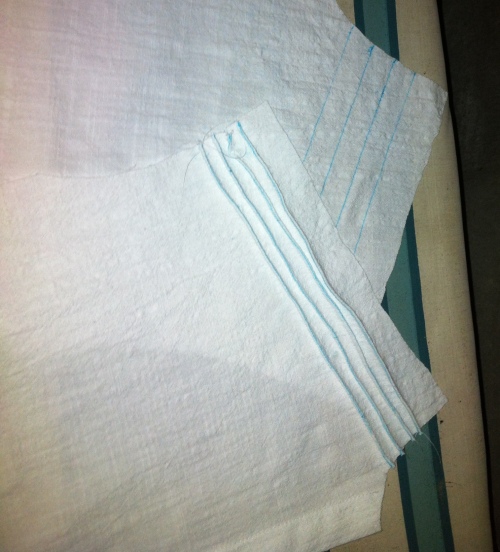 My favourite feature is the shoulder tucks.  Osiris is the kind of guy who’ll wear his tux shirts around just for kicks, so from the first time I saw this detail I figured it was perfect for him. They are, though, by the nature of the pattern, off grain which makes them ripple a little unevenly. We’ll blame that, rather than my sewing skillz, K? Also, I love my wash-away fabric marker.

I should’ve photographed the flat-felled seams on the side-panels. They turned out rather nicely, or at least rather more nice than my previous flat-felled seam attempts. This marvelous textured cotton is probably the easiest thing to sew in the known universe, though. The topstitching (I’m using a light grey) isn’t quite perfect—I’m blaming that on inadequate lighting in my sewing dungeon, combined with the lack of working lightbulb in my Featherweight, which is the machine I’m doing the topstitching on. I should really get that poor thing a new bulb. I haven’t sewn with it since before Christmas, really, and I had forgotten how nice it is to use. I really need to re-arrange my basement workspace so… well, so I can do ANYTHING, really.

I didn’t much care for the Vogue yoke instructions. They have you slipstitch the inner shoulder in place and then topstitch. Not a burrito in sight. Sheesh. I’m still up in the air over whether I’ll do the collar. I’d kind of like to try it because it’s cute, and different from other collars I’ve done before, but on the other hand Osiris prefers his shirts mandarin-collared.

The instructions also have you sew the buttonholes after (long after) you stitch down the top and bottom end of the concealed-button-placket-covering-part. Which just seems kinda silly, so I did mine as soon as I had the placket folded up. Which is a nifty piece of fabric origami, by the way. I thought I had it, stitched, and wound up having to rip it out, but once I went and played with the actual pattern-piece the method became clear.

I used my Greist buttonholer to make the buttons. It works really well on my White machine (which is what I was sewing the non-topstitching seams on; it’s still set up for straight-stitch only from the wedding dress, and the feed dogs drop, which makes setting up the buttonholer much easier). Of course, since no one can see the buttonholes, it doesn’t matter if they’re a little manky, which makes this a super-awesome style now that I think about it.

Next up: plackets. Possibly collar. Wish me luck, down in my sewing dungeon. I’ll try for a less whiny post next time, but no promises. At least the weather has been gorgeous!

13 responses to “Little to report, Cap’n”