Yesterday, I cut. Tonight, I am sampling. Cut what? Sampling what? Poly charmeuse for the test run of what shall, Sewing Gods willing, be the wedding dress for a friend. I’ll call her Epona since I can’t find an Egyptian deity that really suits. Anyway, in case you care, some years ago Epona and I were bridesmaids at my Stylish sister-in-law’s wedding (I was actually a last-minute sub in, which is a whole ‘nother long story). So I was pretty amused a few weeks ago when Epona asked me if I would be one of her bridesmaids, again as a rather late replacement. All we need to do now is for me to have a wedding and get Stylish and Epona to be (last minute, replacement) bridesmaids, and we’d have a perfect symmetry.* Since this seems unlikely (although I did spy a GORGEOUS vintage wedding dress at the thrift store last weekend that would, possibly, be worth having a wedding for.) We’ll get to the bridesmaid’s dresses, anyway. At  the moment, I’m much more worried about the wedding dress. The final dress will be in SILK. SILK, people. 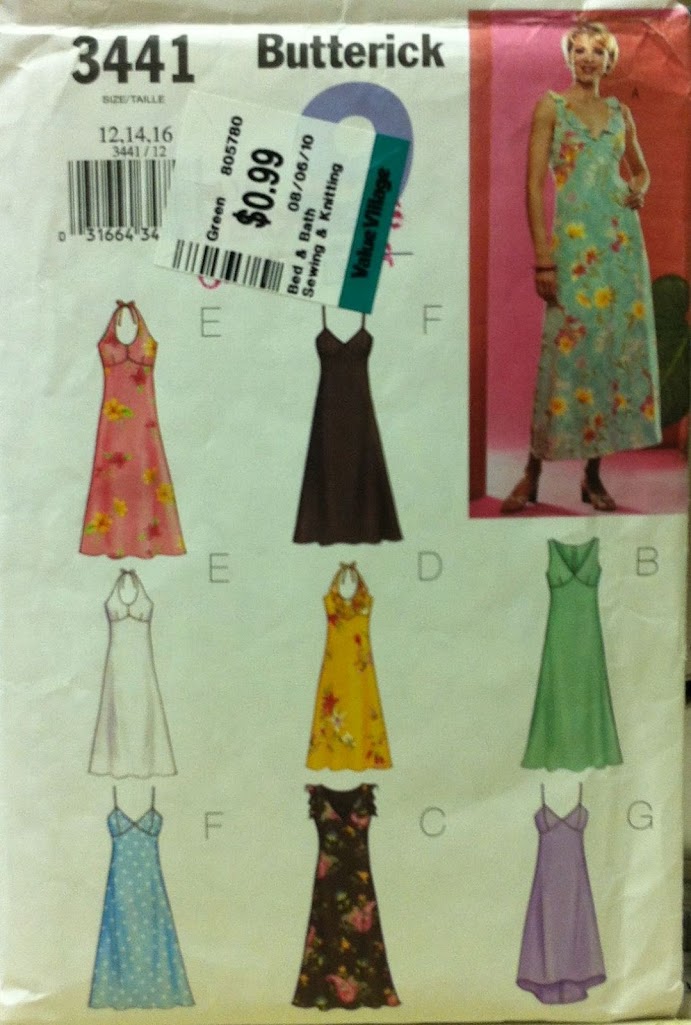 Really, as first wedding dresses go, this one is pretty training-wheels. I mean, Cation just made a freakin’ corseted Victorian evening gown for her bestie’s wedding. All I’ve been asked to provide is a slightly-amped up version of Butterick 3441, View E. This pattern was an early thrift store score that I probably wouldn’t even glance at if I pawed over it today, but Epona wanted a halter-style dress and a perusal of the current Big 4 offerings didn’t turn up anything she liked better. All I’ve done was mirror the front piece so it could be cut on the bias more easily, (did I mention I suggested cutting the skirt on the bias?) and add a bit of a train on the back. Ok, actually, I just lengthened the skirt on view “G”, which already has a train-thing going. I have a sneaking suspicion this will not work, but we’ll see when I can actually try it on her.

The machine of choice

I have decided, after much considering, to use my White for this project, despite it needing a bit of a motor overhaul in the worst possible way. The main reason for this is this low setting on the feed dogs, which I am told is useful for slippery, silky fabrics. Like, oh, silk charmeuse.

Despite being a zig-zagger, it also came with a straight-stitch needleplate, which is recommended for sewing with fabrics like charmeuse because it is harder for the machine to pull the fabric down into the bobbin.  Some people suggest that it also produces a better straight stitch than the zig-zag needle plate. I’m not going to re-unscrew everything to test it out, sorry.

Anyway, having set up the machine and selected my needle (very small, very sharp. You may now begin laying bets on how long before I break this one. I swear I am a champion needle-breaker.), I started playing around with bias seam finishes. French seams are, of course, recommended for charmeuse, and they are pretty, but a little bulky. This poly stuff does not press well at all. (Note to self: pick up some iron sole-plate cleaner before you even THINK about pressing silk… self’s iron is disgusting.)

I have three different seam-finishes here, two French seams and one stitched and serged. The French seams are obviously prettier, but they are both a little more bulky. (One has the first pass sewn with the serger in an attempt to make a very narrow French seam. It’s not really significantly narrower, though it was pleasantly fast and didn’t need to be trimmed afterward. The stitch & serge one also has less puckering, although some of the stuff I’ve been reading has suggested that silk won’t be quite as evil for puckering as the polyester is? Hey, a girl can hope.

I’m not going to go into the details of the cutting techniques since it was, frankly, rather traumatic, but I’m definitely going to sandwich the final silk between layers of tissue. I didn’t want to use any of the spray-and-wash-out methods (spray starch, gelatin) since the final silk won’t really be washable.

I’m trying to decide if I should try and hunt down a walking-foot, as I’ve heard they’re helpful for these slippery fabrics, too. I did notice in my sample seams a slight tendency to creep and ripple along the French seaming, which I can correct with some attention, but this was only a foot or so of seam; the dress skirt will be much longer than that. I’ve ogled the one for my Janome several times, it’s not terribly expensive, and I’m hopeful it would fit on the White (which has the same low shank attachment and bobbin-style as the Janome).

Anyway, if all goes well, I will be fitting a bride in this by the end of the week, and I will have learned to love, or hate, polyester charmeuse.

*I feel a little awkward in my wording, here. You see, I am married, but I never had a wedding. Which by some people’s standards may mean we’re not actually married, to which I say, go jump in a lake. “Dating” stopped being an appropriate word for my relationship with my husband, oh, sometime prior to the birth of our first child.