Sick of fleece pants yet? Yeah? Too bad. It snowed every day this week, except for the bright sunny days with windchills in the -30s C. This is not what I want from the end of March, peeps.

At the end of Episode 3, I mentioned that Syo wanted fleece leggings. Well, not long after that I made the mistake of taking my children to the fabric store, and Syo managed to persuade me to buy her a metre of wolf-patterned fleece. At full price, no less. Oi. Kid has mad parent-guilting skillz. And very long eyelashes. 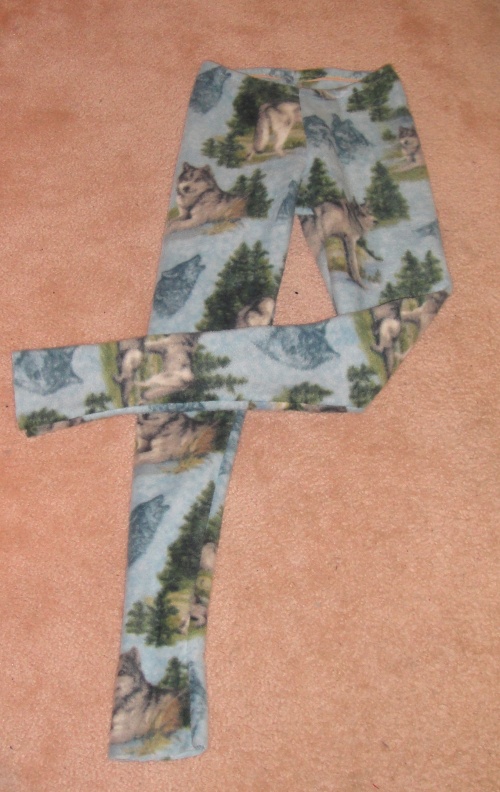 Attempting to be mindful of the lessons of fleece stretch, I knew I would need to size up a bit for this pair. I went back to my original tracing of Kwik Sew 1670 and undid the tuck I had made in the pattern piece when it became obvious after the first pair that they were way oversized. I added some extra height at the CB, and some extra length along the crotch. And enough extra length in the leg to work for Tyo, probably. And (gulping) I cut them out.

And, well, I should’ve gone up a size. (it has, after all, been almost a year since I traced out this size for Syo, and while she’s not sprouting like a weed the way Tyo is these days, she still is getting bigger.) D’oh. Fortunately for me, Syo is extra-super-determined to wear this pair, and she’s very tolerant of tight. I can’t imagine where she might’ve picked that up from. *whistles*

Print mixing to do Oona proud, I tell ya.

Because I didn’t want to lose any height at the waist, I did only a single, very narrow fold-over at the waist elastic. It’s not a lovely finish inside, but it’s plush-back elastic so it’s pretty comfy, anyway, and I’m quite glad I didn’t use up any more height. 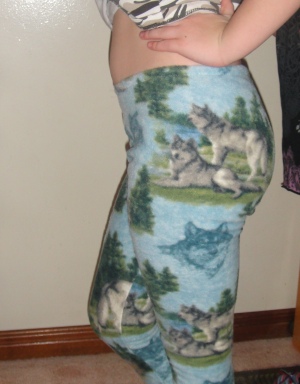 Unlike the purple fleece sweatpants, though, these are a hit. Like a big hit. Like a super-duper-can’t-peel-them-off-her-to-wash hit.

So I have a theory for future tight-fleece-pants-sizing adventures. I hypothesize that zero ease, or at most 10% negative ease, is probably about the max stretch ratio for fleece. So next time, I’m going to pick a size by measuring the thigh of the person who will be wearing them, and then measuring the pattern. Well, at least for fleece leggings, where that would be super simple. I’m still thinking about the yoga pants…

For those of you who are bored stiff of fleece pants, I did steal a few minutes to work on my stalled mail-order dress. I ripped off the yoke and shortened the waist. Everywhere but right at the cf. there are some funny things about this pattern, peeps. But it’s coming, I’m liking it much better. I just need to recut the skirt, but that won’t happen until