Those of you who follow me Twitter or Instagram may have caught the odd hint of one of the winter obsessions Chez Isis this year—fleece pants. The perfect antidote to a Saskabush winter, especially for people who spent the last five years in balmy southern Alberta. And yet, and yet, they have remained curiously absent from the blog. Unforgivable, no? I agree. I kept waiting to get them ALL DONE, and do a great big family fleece pants post.

I have come to the conclusion that if I do that, I may still be waiting come next winter. So, here I go with one installment at a time.

Dredging deep, deep into my memory, may I present my first attempt at making fleece pants? A veritable antique by blog standards, stitched in the fall of 2012.

I used the pattern for the Jalie 3022 yoga pants, of Pink Suit fame (or infamy), with the same alterations to length and rise I had had success with in the pink pants. Fleece is really a nice fabric to work with—bulky, but not slippery, and with enough stretch to make the fit forgiving, right?

Well, I had double-checked the stretch requirement on the pattern envelope, and the fleece matched it, but I neglected to think about one startlingly important aspect, the difference between “two way” stretch and “four way” stretch.* In particular, this pattern needs something that stretches both in width AND length.

The fleece stretches in width, but when it does so it loses length.

As it turns out, a lot of length.

Enough length that the vertical seams, which were beautifully smooth when I topstitched them, bubbled out like crazy. The length which had been more than adequate on the pink fabric (I cut off two inches of the four I had added) became inadequate even for hemming. But most disastrously, the rise, which ended up perfect (after tweaking) on the Pink Pants, became somewhere between risque and just plain indecent. And if it’s too low for me, dear readers, well, it’s too low to show you. 😉

Which is not to say I didn’t wear them. Oh, no. Many a dark and icy winter morning was softened by reaching for my fleece pants. Long shirts and oversized sweaters compensated for the problematic rise, and they were particularly perfect for walking the kids to their bus stop, which has to be one of the most grueling treks of the Canadian prairie winter.

But finally, I had to admit that they really weren’t adequate. It would make much more sense to make myself another, larger pair. And, well… 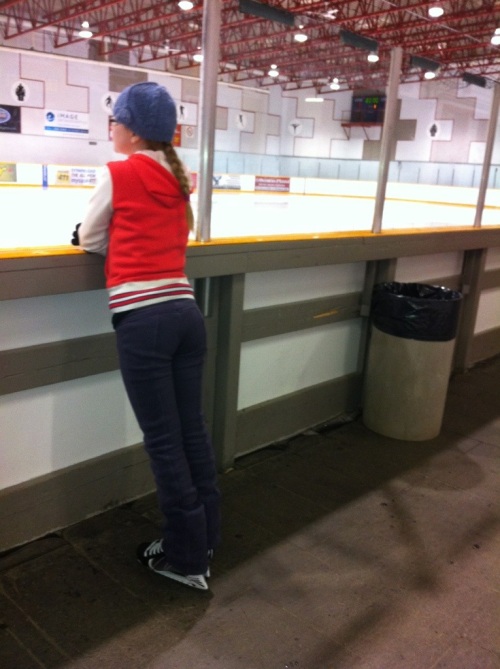 All the photos in this post, as you have probably noticed, are of the pants on Tyo.

*And I’ve seen this defined differently in different places, so, in the absence of a Central Fabric-Describing Authority, I’m going with what is convenient for this particular post.