Hmm, that is a fairly hefty title. I am somehow dubious that I will be able to live up to it. Anyway, here’s some thoughts on something(s) I ponder fairly regularly. Specifically, the “legitimacy” of homemade clothing.

But first, what do I mean by “legitimacy”? Fairly simply, I mean what’s considered (in a given society) normal, proper, acceptable—legitimate. Legitimacy can apply to anything, from the proper way to brew a cup of tea to what makes a legitimate government, but, this being a sewing blog, I’m going to talk about how this idea applies to clothing. Especially the clothing we make ourselves.

It’s no secret that, sometime in the last fifty to sixty years, “homemade” became a bit of a stigma, at least as it applies to clothing. (Homemade dinner, on the other hand, still seems to be a major goal in cooking, and plenty of thoroughly commercial food products are advertised as “home style”. Obviously they’re not eating my homemade cooking.) I’m not a social historian, so I can’t really offer any proof of why “homemade” became “Becky Home-Ecky”. I’m going to speculate anyway, though. 😉

I suspect that clothing made by others for you has always been desirable—in the bulk of history, when clothing was all hand-stitched, there were still garment-producing professionals, and I’m pretty sure the fancy gowns and suits of yesteryear we admire were all made by people who specialized in their craft. Which is not to say there wasn’t plenty of stitching excellence in the home, but I suspect the yen for someone else to do that damned work was always there.

Although clothing production seems, from what I can tell, to have lagged somewhat behind a lot of other areas in industrialization, by the middle of the last century, it was thoroughly industrialized. And, like all industrialized processes, there were subtle differences in the product as compared to the home-made version. A de-emphasis (frankly, complete avoidance) of hand stitching. Different patterns of construction—setting sleeves before sewing the side-seams, for example—that facilitate sewing at the expense of individualized fitting. And, of course, specialized stitches from specialized machines, which a manufacturer can afford to invest in, but which would not become practical for home-stitchers for decades (if ever. What percentage of us have coverstitch machines?). And one of the biggest things this created, I think, was a feeling that our home-made garments don’t always (or ever?) measure up. Our home-mades feel illegitimate. 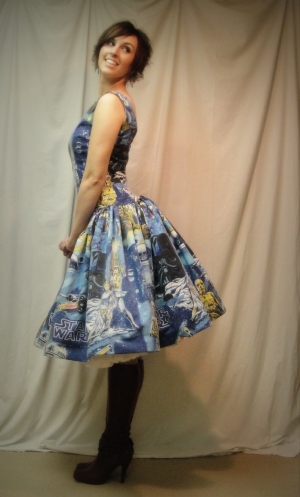 Now, there may have been some intentional work on the part of clothing manufacturers to undermine the appeal of home-stitched goods, and there may have been some anti-domestic backlash rejecting sewing along with the traditional, limited notions of femininity that it went with, and there may even have been a decline in the quality of home-sewing due to its lesser importance, but frankly, even if there hadn’t been, I think the delegitimizing of home sewing would’ve happened regardless. As soon as different methods were adopted in the factories, there was a difference in the product—a difference between home-stitched and storebought. And, frankly, as humans we have a very hard time seeing “different” and not judging “better or worse.” As soon as manufactured clothing became equivalent in quality, cost, and fit (or at least, enough years had gone by for people to forget what custom fit actually looks like), the fact that it was easier than making your own would increase its popularity, normalize it, legitimize it, and home-stitched clothing becomes different and thus bad, illegitimate. It may not have happened the first generation, but I know so many people who talk about hating the home-made clothes their mom or grandma made them. I felt the same way when I got home-made underwear for Christmas as a child. And it wasn’t because there was anything wrong with the underwear. They just weren’t “normal.” And therefore they were bad. (And I didn’t grow up in a home or even a school where brand was a big thing, so it wasn’t about branding.) Even though I started sewing as a child, and made costume-type garments in my teens and twenties, I never really considered trying to make everyday garments. The look, the details, wouldn’t be right. (And “right,” of course, is how storebought looks.) Even without ever hearing the term, I had no interest in making something “Becky Home-Ecky.” It’s worth admitting that what prompted my plunge into garment sewing was the decision to make a classic, tailored winter coat—something that I felt I could make look “right” with the home-sewing tools I had at my disposal, since the seams are all enclosed and the look itself dates back to a time before mass-manufactured clothing.

Triple-stitch zig-zag finish—This looks “wrong” (homemade, unprofessional) to a lot of people, yet it functions just as well as a coverstitched edge. Is it really aesthetically inferior, or are we just not used to it?

Storebought clothing, and the techniques that went with it, had become the standard, and anything different became wrong. I wasn’t around to observe this directly, but at a guess I’d peg this transition sometime in the early 70s, though it certainly started earlier. In my family, my grandmother sewed for her children in the 50s, but had given it up by the 60s. Possibly that’s because she had more children to manage, or boys weren’t as fun to sew for as girls, but I think the fact that storebought clothing was becoming increasingly affordable was probably a big factor. But I don’t get a sense that my mother ever thought of her home-made clothes as inferior, at least as a child.

Shirring—mainstream, independently manufactured, and home-stitched. The exteriors look similar, although my home-stitched versions have closer lines of stitching (two on the right). The mass-produced garment (left) uses a different stitch, which resembles a chain on the inside.

How, then, do we deal with the fact that, in this day and age, the things we sew will always be seen, to some extent, as attempts to imitate something else—storebought, mass-produced, clothing?

The modern home garment sewing crew (or at least the blogging portion of it, which is really all I can speak for) tackles this problem in two main ways, I think. The first method is technical: striving to emulate storebought clothing more closely, by using “industrial” construction techniques, and by mimicking, to the best of our ability, the stitches and fabrics (and styles) used by the industry, and by investing in sergers and even coverstitch machines, that can achieve some of the specialized techniques of the manufacturer. The other is psychological—recognizing the reasons for the differences between the clothes we make and the ones we buy, assessing their importance (do you really care if your seam is serged once your clothes are on?), and trying to accept, to varying degrees, that different doesn’t always mean worse (Do my jeans have to have that particular wash to be “real” jeans?). The Me-Made-Month challenges are a prime example of of this approach, and it’s probably the biggest single contribution of the sewing blog community (aside from the whole, y’know, community thing.)—helping us think about our home-made clothes, not just as imitations of something from a store, but as a genre in their own right.

And again, different is not the same as wrong—both of these approaches are great, when used appropriately. Like, by all means serge your T-shirt if you have a serger. It’s fast and tidy, which is why the manufacturers do it, too. But don’t necessarily let the lack of a serger keep you from ever attempting a tee. Accept the little quirks and booboos of your home-stitched garments—but don’t stop striving to improve on your next make. Use excellence as your standard—but don’t accept “storebought” as the standard of excellence without thought.

One weakness of the “imitation” approach is that it can limit our creativity. I’ll cite an example from one of my favourite things to make—jeans. One of the standard features of traditional jeans is a flat-felled inseam. Now, a flat-felled inseam is certainly not beyond a home stitcher for any technological reason—anything but—but a pure “imitation” mentality limits us to using only that technique—when, if you start looking at storebought “jeans”, you’ll find that while it’s common, it’s by no means universal. Designers of manufactured jeans have no need to legitimize themselves by sticking to traditional, “proper” features—but if we take a strict “imitation” mindset as home-stitchers, on the other hand, we will limit ourselves to only doing things the traditional way. We will lose one of the greatest strengths of home sewing—our ability to be creative and individual.

“Acceptance” has its weaknesses, too, of course. I can accept my wonky hems, my unfinished seams, and my not-quite-right tees all I want, and wear them proudly—but if I use this as an excuse for lazy work, well, that’s just being sloppy, and it will show and contribute to the impression others have of home-sewing as second-class sewing. Not to mention I won’t get any better at what I’m trying to do.

Where we draw these lines will vary between stitchers (some of us are all about being on-trend and having our stuff be indistinguishable from what could be bought at a store; others are all about creating a vintage or couture look that celebrates the hand-made) and over time for individual stitchers, and I don’t think there’s any right or wrong answers. Except, maybe, the answer that would be blindly accepting mass-produced clothing as the only legitimate form. But I doubt anyone who thinks that is reading a sewing blog ;).

I’m really curious to hear where you all are—where you draw these lines, and what’s most important to you. How do you legitimize your sewing, to yourself and to others? Or do you even try?

Tagged as too much talk