A little while back, Peter posted one of his periodic dirges discussing the dearth of stylish modern menswear patterns. However, not one to be a negative Nellie, he went on to highlight one of the more exciting periods, historically, in menswear, the 1970s, and, in particular, the patterns Butterick—the Fashion One—put out for men during this time period. (And the ready availability of said patterns today, often in uncut condition—which probably says something about why they don’t still make ’em like that)

This touching paean niggled something in my memory. Something about 70s menswear. 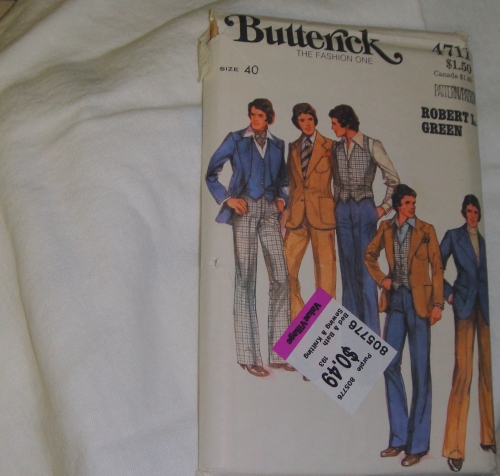 Aha! there it is, folks, Butterick 4711, a men’s suit pattern I thrifted for, as you can see, the princely sum of a half dollar, uncut except for the vest. And designed by, or at least approved by?, Robert L. Green, whoever that is. (Ok, apparently he was the style director at Playboy during the 60s and 70s, among other things.)

While I certainly couldn’t resist this pattern, especially in the size 40 (exactly my husband’s size! Well, for the jacket, anyway), the odds of me actually making it up are, ah, infinitesimal. My husband, despite being only a couple of years older than me, came of age firmly in the 80s. He’d be much more likely to wear this pattern (image also courtesy of Peter) than a very 70s suit.

That being said, Peter’s post prompted me to pull out the pattern and peruse the instructions, as one does, y’know. Some nifty details emerged: 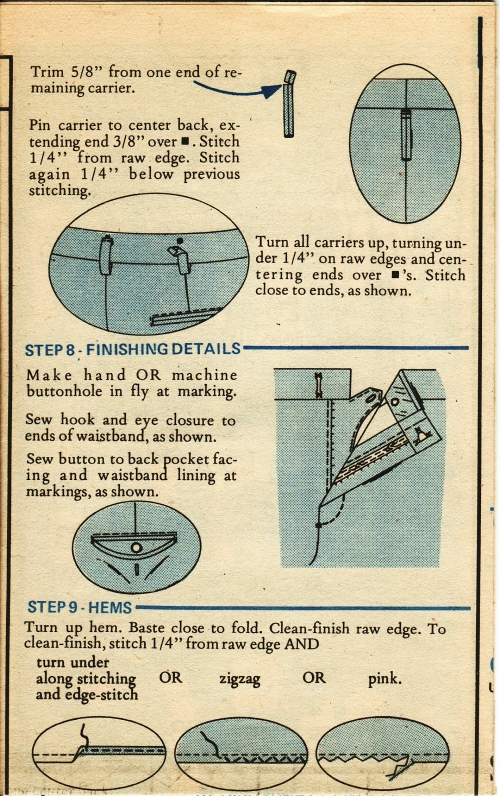 French Fly! (Or at least, that’s what Carolyn called it. See her tutorial. See it now. (durr, I wasn’t paying attention and scanned the picture of the fly, but not the part of the instructions concerning it. Oh well. Go read Carolyn’s tutorial instead.) 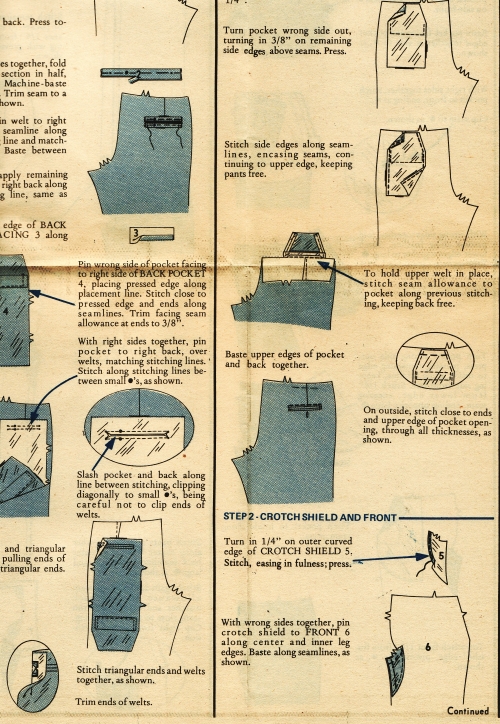 Welt pockets that hang from the waistband–COOL! Maybe you’ve seen this detail elsewhere? I don’t think I have, not that I’m overly versed in fine tailoring. Still cool. 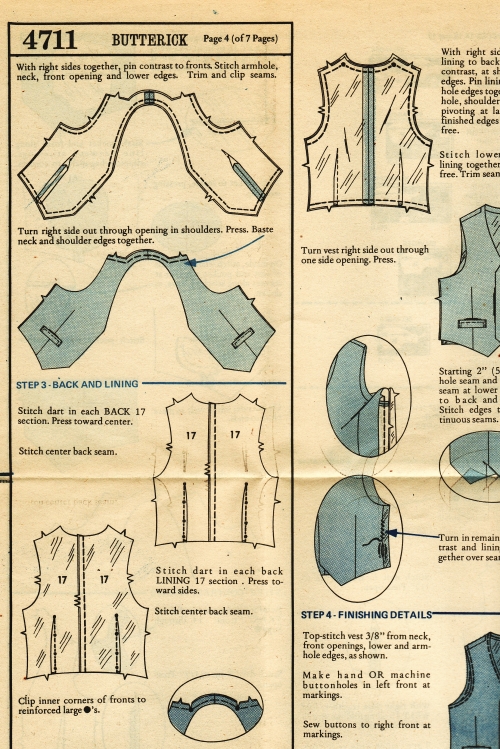 Odd back-neck strap on the vest. Apparently whoever made the vest before thought it was odd, too, as it’s been clipped off the front pattern and pinned in place on the other piece.

I didn’t get into the jacket instructions, partly because they’re too involved for the amount of time/energy I have right now, partly because it’s for only a partial lining, which isn’t acceptable in menswear as far as I’m concerned, not that I’m any kind of expert.

Now, my husband won’t wear any element of this suit, as I said, except perhaps the vest. My husband does wear vests. And wear them very well, I may add. 😉 My very ticklish fancy is currently dying to make him a soft and summery vest in white slub linen. Of course, I don’t have any white slub linen… but a plain white linen would do (see photo at the top).

Of course if I propose this, he’s going to ask where his jacket is.

But it’s a good fantasy, isn’t it?

Oh, I also got, at the same time, the coordinating boy’s suit pattern: 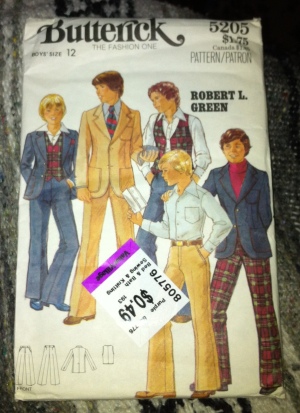 If only I had a sartorially adventurous twelve-year-old boy to sew for. No? Maybe not.