A dress for the boredom

A dress for roasting marshmallows

My kids have been done school for just over a week, although they’ve only really been home for the last two days, since we went Home for Canada Day (July 1, just for reference). Nonetheless, last night Tyo was moping around as only a near-teenager can. “Dad and Syo are out fishing, Grandpa’s watching TV, and you’re sewing! There’s nothing to do!”

This is actually wonderful.

“So, does this mean you don’t want to be homeschooled after all?”

Since the main thing coming out of her mouth for the last three months  of school has been requests to be homeschooled.

Anyway, it appeared that the only thing that could possibly alleviate boredom at eight o’clock on a Friday night was sewing with me, or rather, me sewing while she sang me her most recent song.

The fabric she selected was one of the slinky knits that I can’t seem to resist. I love buying them. I love wearing them. I just don’t. love. sewing. them. This particular knit threw itself at me on the Fabricland Canada Day sale (which took place several days early) when even the clearance racks were fifty percent off. I have a hard time resisting $1.50/m fabric. Fortunately, I bought three metres, so even with this dress for her, there’s still plenty left over.

For the pattern, we just used the ubiquitous racerback tank pattern, Y1201 from Young Image Magazine (which was a dress pattern, originally). I added what I thought would be enough length to take it to her knees, and a bit of width over the hips because, well, Tyo, and more-or-less happily went to work.

Now, the four previous times I’ve made this pattern, I’ve used a rib-knit. What I hadn’t really grasped on was how much rib knits grow. I mean, my brain knows it, but I didn’t really understand it. This was an easy-fitting tank when stitched in a rib-knit—close fitted but not exactly skintight.

In this slinky knit it’s, ah, pretty tight. Note to self. Also, next time add more to the butt. Tyo is not one of those children who can wear a skirt whose back and front are cut the same.

Because I don’t trust these slinky knits as far as I can stretch them (which is pretty far, actually), I used clear elastic inside the binding on the neck and arm-holes. I didn’t stretch it quite enough on the neck, which is a bit wavy, and then stretched it a little too much on the arm openings, so they’re a bit snugged up. It seems pretty much ok when worn, however. I should really look into elastic and/or binding attachments for my machine…

I had measured Tyo from shoulder to knee to get the length, thinking I might have to trim some off as the fabric sagged under its own weight. But I forgot/neglected that four-way stretches will lose length as they are stretched sideways, so it’s actually an inch or two above her knees. Not horrendously mini, but a bit shorter than planned. It rides up a bit in back, but I’m not sure if that’s because it needs extra length, or more width so it doesn’t get caught up on her posterior. Probably both.

We left the bottom unhemmed, so it would flow nicely.

I was a little worried about how sheer the white base fabric might be, but it doesn’t seem to be horribly bad. 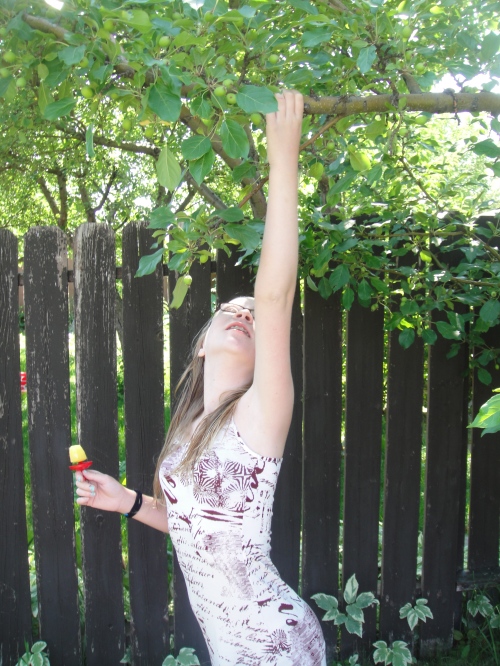 OK, actually I’m really jealous. I love this fabric, and really want my own garment out of it. I’m thinking flowy maxi-dress.

29 responses to “A dress for the boredom”