The Great Pyjama* Party Reveal is coming up, and, as with every challenge and sewalong I’ve skipped out on in the last few months, I’m totally jealous. I didn’t sign up because I just made loungewear not that long ago (the infamous Pink Suit), which gets worn for pjs plenty, and I have lots of other things on my plate. But does that impede the green-eyed monster? Not a whit!

Me-Made-May (which I’m also not signing up for as I’m totally incapable of actually challenging myself right now) is TOTALLY going to suck. If I sulk the whole month, you’ll know why.

Anyway, ending tantrum, let’s get back to the fantasy sewing. If I were a part of the Pyjama Party (which I’m not, so y’all can hit someone with a pillow in my honour), I would be sewing this: 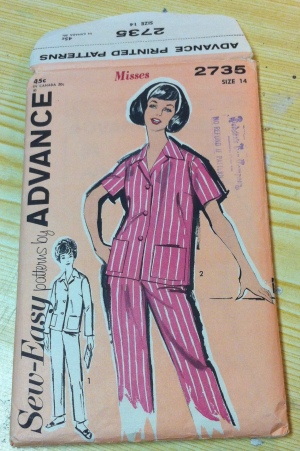 This is my lone Advance pattern, which I found at the Mennonite thrift store in my hometown a few months back. Bought, frankly, because it was there and significantly older than my usual 70s “vintage” scores and it was Advance, a company I’ve only heard of on blogs before (not having a lot of JC Penny stores around here, as far as I can tell.)

Now, for the fantasy fabric. I don’t have a whole lot of fabric in stash that screams PJs at me. Maybe the black & grey pinstripe from my willpower fail? It’s soft and fuzzy and a bit stretchy, but seems kind of, hmm, nice. I was thinking more like officewear for it.

Because, y’know, I wear so much officewear.

The first thing that comes to mind for a pattern like this is, natch, flannel. I don’t keep a lot of flannel in stash. There’s some plain black (boring), this really twee bear stuff from my Grandma’s stash, which is either destined for a twee little girl or needs a much edgier pattern. Is there such a thing as an edgy pyjama pattern? Hmm, now my brain is going in a sexy-slips-made-out-of-flannel-instead-of-satin direction. Weird. Probably Wrong. 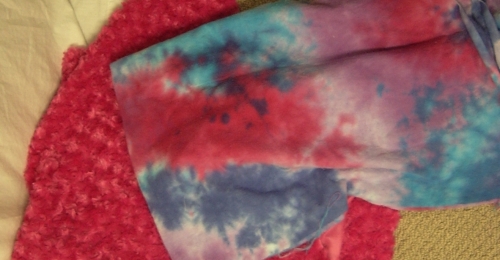 There’s this crazy dye-splotch flannel, originally purchased for making little zip-pouches and rice-bags for school presents. Hmm. But I think I had convinced Syo that it would be an acceptable backing for her crazy pink fun-fur, part of which she made into a pillow, the rest of which is supposed to become a blankie. This is what happens when you have to buy remnants and the second one is free… 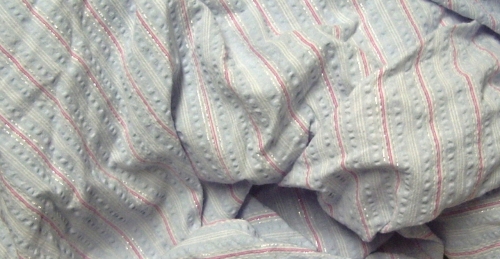 For summer PJs, seersucker is a popular choice. I only have one piece, which is cute pink, white, and blue, with a little bit of silver sparkle shot through. I have a shitload of this, purchased on mega-clearance and originally earmarked for little-girl dresses, except that my little girls have gotten distinctly less little-girly in the last couple of years. On the other hand, I still have little nieces, and I’m not entirely sure that the silvery bits would be totally comfy for sleeping in.

Then there’s the navy seersucker that’s been taunting me from the fabric section at Value Village for the last two weeks. I’m resisting because it’s a tad expensive—six bucks for a piece not quite two metres—for thrift-store fabric, anyway. It would be nice for PJs (or a nautical dress) but I’m trying to resist because of the price.

Of course, the sewalong is pretty much done right now, I’m in the middle of the spring dress of evil polyester doom, and have no real need of vintage-inspired pjs (that I’m pretty sure Osiris would find totally unhawt, even worse than the Pink Suit)… so there will not be any sewing of this pattern, at least right now. But I was feeling the itch, and I think this post has kinda got it out of my system…

**I’ve decided, since my “wanna!” list is so much longer (and ever changing) than my “actually can” list, that I’m going to subject you all to some fantasy sewing posts. Posts about the fabric I’d like to be stitching up, and what I’d stitch it up into (or vice versa). If you’re lucky I’ll get bored of them soon… 😉

Tagged as Fantasy Sewing, Pyjamas, too much talk, whining