(as my children so endearingly dubbed it) … is finished.

Right off the bat, I am going to apologize to Lisa. I did not end up incorporating her awesome hood pattern on the Renfrew. Mostly because I couldn’t find one of the  pattern pieces I painstakingly drafted from her instructions when the time was right, and I was too impatient to wait for it to show up. But then, the pink fabric is possibly a bit too thin, anyway. I will definitely try another time, after the pattern piece shows up.

So, shall we start with the bottom?

I added 4″ to the leg length in this pattern, as the size R (my hip size) only has a 30.5″ inseam. 34.5″ is a bit excessive, even for me, but frankly I wanted to be safe rather than sorry, and given that 4-way stretch pants sometimes lose length as they stretch, I wanted plenty. As it turned out (at least in this very stretchy fabric), I only needed about two extra inches, but I think I’m going to keep the length in the pattern just in case. I added the length in two sections, 2″ at the lengthen-shorten line on the thigh and 2″ just below the knee. I also did a small full-butt wedge (this  adjustment), based on my kids’ experience. Although as it turns out I probably could’ve skipped that, not so much because I didn’t need a bit of extra height in the back as because the overall rise was considerably too high for me—coming to just below my belly-button. That looks right on my kids; it doesn’t look right on me. Fortunately in a style like this, it’s easy to fix. I lopped off the seam at the bottom of the waistband (I don’t un-pick knits if I can avoid it), and cut a band off the top of the pants-portion, about 1cm from the back increasing to 3 cm at the front. Then re-attached the waistband. PERFECT! 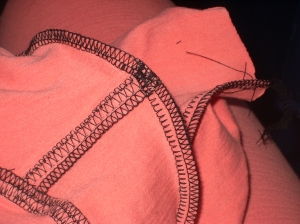 For seam finishing I went a bit…overboard. I had decided on black topstitching, in the hopes of cutting down the severe sweetness of all that pink. For my seams themselves, I opted to use a simple overedge stitch on my White, which is both stretchy and makes a much straighter seam on the right side than the overedge stitch on the Janome. And then finish the edge on the serger. And then topstitch with what I think of as the Janome’s “Athletic stitch.”

That’s a lot of stitching. 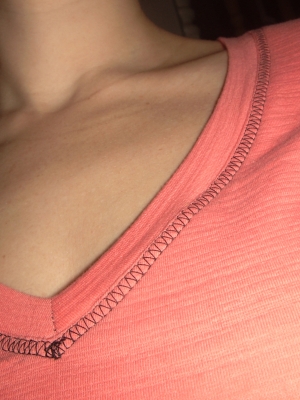 One of my main reasons for using the White for the seam stitch (besides saving me switching my settings constantly) is that it has adjustable pressure on the presser foot, and lightening the presser-foot pressure makes the knit wave up much less than the Janome’s fixed, heavy foot. Which meant that my seams looked really nice right up until I decided to topstitch with the same Janome. At which point they waved up like crazy. Ironing has helped somewhat, and I’m hoping that the laundry will take care of the rest, but if not, I will be warned for the future. Which is too bad, because I really like the look of this topstitching for “athletic” gear. 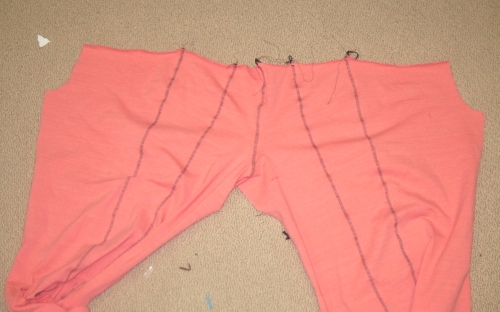 I was initially a touch puzzled by the instructions, which have you construct the back as usual, then stitch each side of the front to the sides of the back, before finishing the front crotch and then the inseam. Then I realized it was *much* easier to topstitch the outseam before the “tube” was closed by stitching the front crotch. Smart Jalie! And for once I actually followed the instructions, so I got to enjoy the benefits of their braininess. Yay!

I used strips of Steam-a-Seam Lite (2) in the hems of the pants, as has become my modus operandi for knits, and they turned out, well, no wavier than the other topstitched seams. The nice thing about this particular topstitching (as opposed to say, twin-needling) is that it is the same top and bottom, so I could topstitch looking at the inside and make sure I was covering the edges of the hem-fold. Although, since the edge was already fused in place with the Steam-a-Seam, I suppose there wasn’t much I could actually do if the hem was wonky. Still, I felt better. 😉

On to the top?

I used mostly the same construction methods on the shirt, although not nearly so much topstitching (just around the bands.) Once again I followed Tasia’s instructions surprisingly closely (for me), and was glad of it, because I initially sewed the “V” on the neck-band the wrong way—it was making an “A”, not a “V”.  So double-check that bit, because it’s not really obvious from the pattern piece. It turned out pretty well, though, as you saw above.

As so many others have said before me, there’s not really much not to love about this top. Easy fit, cute styling. I do prefer a smaller seam-allowance, especially when setting in the sleeves; the Jalie knits all have 1/4″ seam allowances, which can feel a bit scant—I think 1cm is definitely my fave in almost any situation. The shoulders feel a bit tight (which is odd, considering they’re rather wider than on my knit sloper) but I think this actually has to do with the curve of the armscye on the body, which is much more extreme in this pattern—which also makes the sleeves angle down more, as opposed to the sleeves on my sloper, where they angle more out. Despite the sleeve-caps being virtually identical. Verry Eeenteresting, my friends. (You can see the effect of the downward angle in the photo below, where they bunch up a bit above my shoulders because my arms are out.) This is also one of those differences that I wouldn’t notice in a fabric with a bit more give or a bit less recovery. I will say, if you’re fitting a knit, this is the fabric to do it in—it actually stays the size and shape that you cut it out.

Altogether, it is a lot of pink. Possibly more than I’m comfortable with. I was hoping the black topstitching would take the edge of the sweetness, but there’s not quite enough of it. I don’t think it will actually stop me wearing these (although maybe not so much together), but if it does become a problem I could always take a whack at producing a lovely sludgy dyed colour as Carolyn is so good at.

The only complaint I have about the pants (aside from the ripply seams) is that the fabric is *borderline* too thin for bottoms. In a dark colour, I might not have noticed it, but, well, we’ll just say I shall have to be careful which underwear I wear with these.

So another view. Note the un-ripply inseam and the ripply topstitching.

I had some photos showing where the waistband ended up after my alteration, but I’m just not quite happy enough with the current  jowly condition of my midsection to throw them up (at least in combination with the other things I don’t like about these photos, like my bad after-work hair and the crappy photo quality of my backup camera).   So you’ll just have to imagine it going from right below my navel to sitting comfortably beneath the belly-flub.*

I wish I could say this sporty suit will inspire me to  take after Winnie, but I fear that a) I hate long-distance running, and b) nothing’s going to change before the end of the summer at the earliest.

But at least I will be comfy while I slob around the house!

Also, now Tyo wants shorts from the leftover fabric. My desire to move on to other projects is at war with my desire to get rid of the remaining half-metre or so of this fabric. Hmm.

*As usual when I whinge about my body, I feel the need to insert a disclaimer: overall, it’s a pretty good body. I am (and have been for the past several years) mistreating it horribly, as health, fitness, and everything else except family and sewing, in fact, are pushed aside in the face of THESIS. And while I haven’t gained a significant amount of weight, I’ve definitely lost muscle tone, and what I do gain goes right to my middle. It’s not horrific—it’s just not what I want to see when I look in the mirror, and not what I would be seeing if I was doing anything other than sit in front of a computer nine hours a day. And I can’t even blame it on having children… 😉

48 responses to “The Pink Suit”