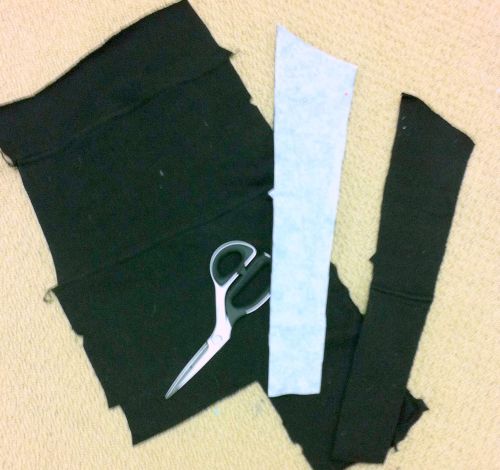 So, remember when I posted how I’d finished cutting out the last bits for Tyo’s bunnyhug and had enough fabric left for her pair of shorts?

Well, as soon as I finished cutting them out, I had a little niggle. What if. What if I messed up one of the pieces? What if I have a serging accident? I just officially used up all but the smallest scraps of my matching fabric, with no hope of replacing any of it.

Well, when I finally started tidying up, guess what I discovered?

One more pattern piece for the bunnyhug, which I hadn’t cut out.

Not only that, the single longest pattern-piece in the entire pattern, the sleeve sides. Of which I need not one, not two, but four copies.

I think there’s a sequence to this, kind of like the stages of grief. Denial—maybe I took the pieces off the pattern and they’re kicking around somehwere? Anger—how could I do this? Oh, I’m so stupid. Bargaining—maybe I can match in some other fabric? What about the scraps from hubs’ coat? no?

Fortunately with sewing, at least, there’s the potential for action, not just acceptance.

I gathered up my largest remaining scraps (most of which weren’t more than 6″ in any given direction.

I roughly, ever so roughly, matched the grain-lines.

And I pieced them together, using the same serge & topstitch methodology I used on Tyo’s shorts.

This was a wild affront to the sewing gods, peeps. If I die in a freak serging accident next week, you’ll know why.

And I cut out not one, not two, but four side-sleeve pieces. 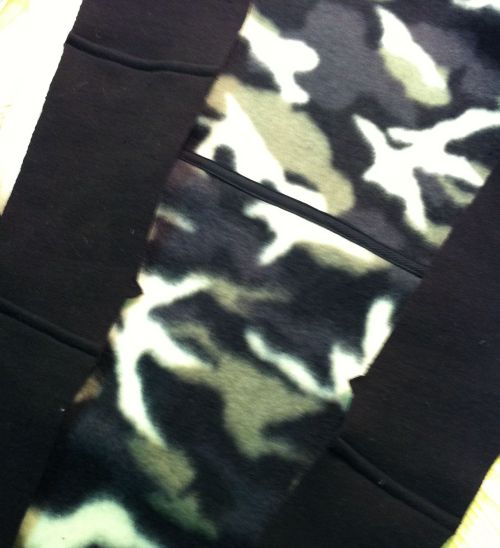 I’m actually pretty satisfied with how they look. Not exactly intentional, but not exactly unintentional, either. I used some black twill tape to cover over the seam on the top part of the sleeve, which echoes the topstitched ridges in the black nicely, I think. This is the same method I used for Syo’s hoodie here.

For the other sleeve, I decided to add a little pocket just above the top-sleeve seam.

I even *almost* managed to match up that one piecing seam. So close…

So I think it’ll work. But I still don’t recommend it. Now tell me your latest offence against the sewing gods (intentional or otherwise) to make me feel better! 🙂