My mother is many things…

Not least of which is an enabler. 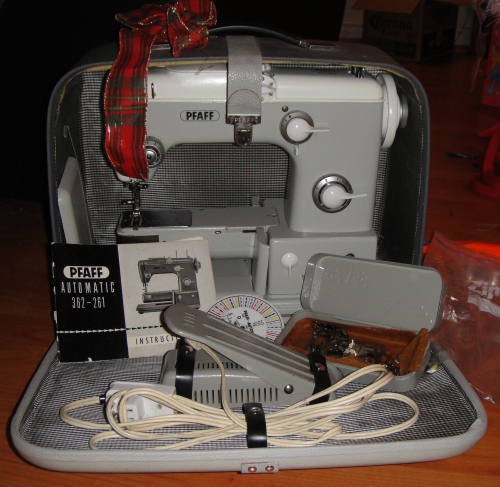 This is a Pfaff 360. Some time in the 60s, it was a top of the line embroidery machine—that little colourful wheel thingy gives you the settings for the various stitches. My mom bought hers in the early 70s, second-hand, for about $250; this is still what a lot of them go for, from some quick googling. It’s the machine I learned on,  and measure every other machine against.

When I saw the case with the ribbon tied to the handle, I nearly had a heart attack, and had to open it up right away and check the attachments to make sure it wasn’t her machine. Fortunately, no. This is the machine a friend of my mom’s has been sitting on, but not actually using, for a while now.

This one has had a bit of a rougher life than my mom’s, I think. It’s a bit dinged up and the automatic threader is missing (not that I even knew it had one before Mom mentioned it.) The tension is giving me a bit of grief, although I think it’s just a little sticky and probably needs cleaning. I already messed around with some free motion satin-stitch embroidery and it sucked considerably less than I thought it would.

Every sewing machine feels a little different to “drive”, y’know? Some are zippy and light, some are sluggish, some are powerful. The Pfaff 360 isn’t as fast as my new Janome (or, for that matter, the old Army Machine, which when it’s going, goes like crazy), but it’s solid, powerful, and can chew through anything you can fit under the presser foot. And most importantly, it feels right.

The accessory box isn’t as extensive as my mom’s, (and in fact is missing some key pieces, like a zipper foot) but it does have a few that were missing from my collection—there’s a funny little keel that fits over the regular zigzag foot to work as a stitch-in-the-ditch foot and a buttonhole-measuring foot that had me thoroughly puzzled until Mom told me what it was. And it’s another low-shank machine, so the bits should be interchangeable with everyone else except the Army Machine.

Merry Christmas, everyone! I’m thoroughly overflowing with turkey, stuffing, and cranberry sauce, so I’m off to bed. Have a great night!

Tagged as My Mom, Pfaff 360, too much talk, vintage, Vintage Sewing Machines

20 responses to “My mother is many things…”