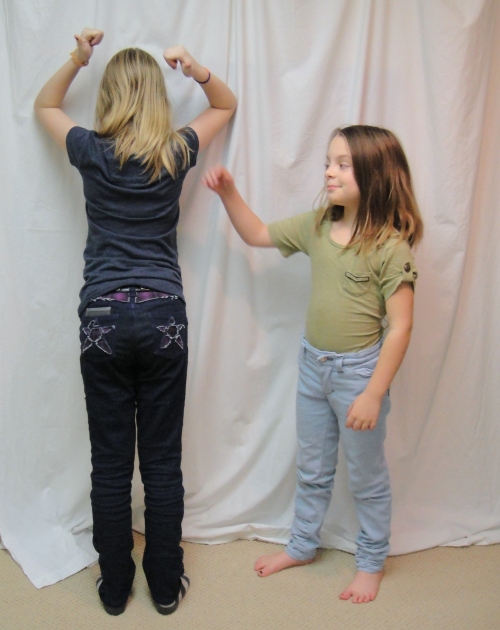 Mom, you can't expect me to pose with my sister!

Although I love the idea of the Sew Weekly challenges—how fun, to be sewing something on the same theme as people all around the world!—I hardly ever actually do them, partly because I already have too much on my own list of projects, and partly because it usually takes me a lot longer than a week to go from theme/inspiration to an actual project idea, never mind a finished project. But every once in a (long) while the weekly theme coincides with something I’m already working on, and that was the case this week: Do Over.

Now, since I do over a LOT of patterns, this is not such a bit coincidence. But I’m still going to count it, because the project I finished this week, Tyo’s new jeans, is a do over on SO many levels.

1) Jalie 2908. Part of the do over is to revisit a pattern you’ve used before. This is easily my most-revisited pattern of all time, not least because it comes in sizes for both me and my kids.

2) I am re-visiting the skinny, ruched-leg detail I used on Syo’s most recent jeans

3) I am ALSO revisiting the cutout/underlay detailing from Tyo’s first, too-quickly-outgrown, pair of Jalie jeans.

… which basically means that there was nothing new or innovative about this project at all, which I think was probably NOT the idea of the theme, but oh, well. I’m still claiming it.

Some final thoughts: I added height to the rear crotch for Tyo’s booty. At the moment it’s a bit baggy there, so this wasn’t really necessary. On the other hand, she still has a fair bit of room to grow into these, so I’ll get back to you on that in another six months or so. Remember how I had pieced the waistband? I wound up only needing a small portion of extra and it works fine, but I’m a little puzzled that I needed any at all, since if anything my yoke tucks should have made the waistband too long for the jeans. Tyo’s jeans aren’t as strongly ruched at the ankle, mostly because I was trying to squeeze them out of a small amount of denim, so I could only extend the leg a small amount.

All right, I GUESS I can pose with my sister...