Some detours and a teaser

Today is the last day of school for my children. Syo wrote this touching little goodbye note to her beloved teacher this past weekend, amid a not inconsiderable number of tears. I may (or may not) have mentioned before that my children are educated in the French Immersion system here in Canada. Established in the late 70s or early 80s (I think as an effort to reduce tensions between the Two Solitudes, aka English Canada and French Canada), what it means is that in most areas of Canada, as part of the public school system, you can opt to have your children educated in French.  Incidentally, I went through nine years of the system myself, and although I wouldn’t currently call myself fluent I’m pretty sure I could become so in fairly short order if the opportunity arose. An interesting side-effect of learning French in school, however, is that the French you learn has rather more to do with “proper” French (i.e. as it’s spoken in France) than colloquial Québecois French, or any of the much smaller regional Canadian French dialects. I do much better comprehending TV programs from France than from Québec (although best of all, natch, is other non-native speakers who actually take their time with the words), and was once told I had a “Parisian” accent (although she may just have been flattering me…)

What Tyo meant to write above was “Au revoir, Mme G. Bonne fin de semaine. Je t’aime.” (“Good bye Mrs. G. Have a good weekend! I love you.”) What she actually wrote would translate, to the extent that you can translate words this mangled, as “Gurdlebee Mrs. G.  Good hungry week. I you love.” How did I listen to her speaking all year and not realize she was putting an “L” in “au revoir”? (Hopefully you won’t judge the French Immersion teaching quality too badly by my children’s ability.  My family seems to specialize in late-blooming, academically. I went from nearly flunking Gr. 3 to having an off-the scale reading level by Gr. 6.)

… anyway. I do actually have sewing to report. For those of you who are bored by the family-blogging, I apologize, I’ll be kidless for most of the next month so it should be all me-sewing, all the time (unless I break down and make something for the hubby). The little zippered pouches are done (whew!)  and have been sent off to their well-deserving teachers. All that remains kid-project-wise now are the little dresses for my nieces.

So of course, instead of working on them I started on my red polkadot sundress. It’s based very, very loosely on the Katjusha pattern off Burdastyle. Although the shirred back piece theoretically makes fitting a snap, I did not find this to be the case. Although I’m pretty much a Burda size 36 (or possibly 18 with monkey-arms and giraffe legs), I am not exactly the typical shape. A quick muslin of the front pieces showed that I needed to reduce the bust curve substantially. Fortunately I’d omitted the darts in the side-front pieces (I’m not sure why it has both darts and princess-seams, but happily leaving the darts out meant that the waist was actually large enough). I also reduced the arching of the top of the front. I should’ve omitted it entirely; although I like this feature in theory, as you can see in my inspiration sketch below, I always find the shape or proportions are off, at least for my figure, when I try it in practice. I lengthened the bodice below the waist, too, so that the skirt will begin down on the hip. Then , having achieved something approximating fit, I (rather unscientifically) doubled the length of the centre front panel so that it could be gathered to form a ruched front. Because Amber got me thinking about them with her swimsuit post and, well, despite the fact that more bulk through the midriff is the last thing I need, I like the look. More importantly, I like the look on my actual body, not just on my theoretical bombshell body.

Then I shirred the back, which is a simple double-thickness rectangle. This takes forever, but is pleasantly mindless while listening to a good podcast. It took about three bobbins full of elastic thread, and seems to have majorly thrown off my bobbin tension (oops!), but other than that worked quite well. I’ve never had a problem shirring on my Janome. Although it does some odd things to the polkadots!

I got the back shirred panel attached, tried it on, and realized that even the reduced arch of the front was totally wrong for me. So I flipped it back inside out and tried to straighten out the stitching, ruining my careful understitching in the process, but at least it’s closer to straight-across now. I also should have shortened the waist (gee, big surprise). Foolish me, I figured on a dress like this I would just tug the dress higher, but it’s not just the position of the waist, it’s the angle. As a part of being short-waisted, my waist indentation (such as it is) is quite abrupt; the waist curve on the pattern is much longer and more sinuous; sort of the difference between < and c, if you see what I mean. Lesson learned. 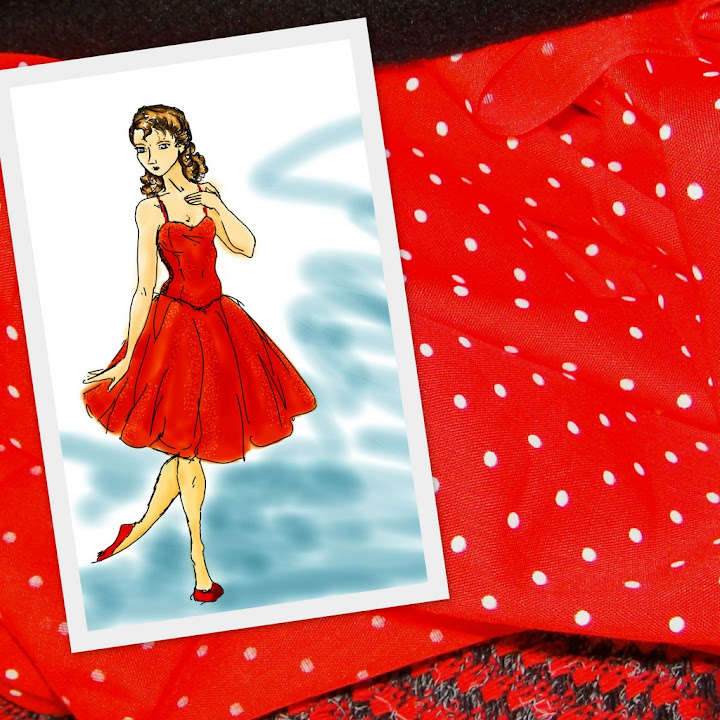 My inspiration sketch again. Of course, the dress is obviously different from this already...

I forgot to make and attach the straps to the front before I stitched front and lining/facing together. Oops. They will have to be tacked on after, now. The shirring ensures it stays up fairly well even without straps, but experience has taught me that I’m never very comfortable in strapless tops. Too much fussing and worrying.

Now, I need to tackle the skirt. I was thinking circle, but with an extra-wide waist so it could be gathered, but the amount of fabric left seemed minimal for achieving this look. So I am going with a dirndl. I may regret this.

Today is slated to be the hottest day of the year yet, with a high of 28C (oddly predicted to be reached at 8 pm tonight, I think the weather people are smoking some crack but we’ll see.). In celebration I have busted out my most summery of summeries, this 70s-pattern maxi I made up last summer. You know how some things you put on and think “this looks home-made”? Well, this is one of them. Which isn’t to say that I don’t like it or that I did a poor job of sewing it (although there are a couple of oopses), but something about the narrow elastic and the gathered back just look homey to me. On the up-side, it’s the perfect pool-side pretty (to steal Ali’s phrase), as far as I’m concerned. I have promised myself at least five minutes this afternoon sitting in the sun in the back yard with some iced tea. If I close my eyes, I can pretend there’s a pool around somewhere.

Even more making up for the home-made feeling is the fact that last summer someone stopped me on the street while I was wearing this dress and asked where I had bought it. When I told her I had made it, she asked if I sold them.

So I guess it’s not all bad.

11 responses to “Some detours and a teaser”