Skinny cargoes: a tale of obsession

We won’t go into the state of my house or how neglected my children are, all right? I promise I’ll stop. Ok, slow down. Real soon. Really, really, soon.

But in the meantime, while I was only planning to show you this: 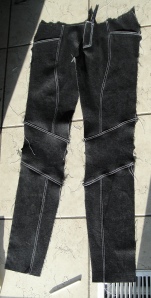 A good start on the skinny cargoes

it turns out that I couldn’t tear myself away, and now I can show you this: 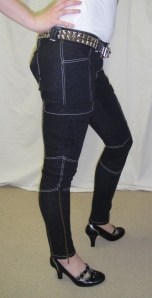 Yup, they are finished. Pretty much. I’m still debating opening up the inseam again and adding topstitching all around the big cargo pockets. And there’s some issues with the topstitching around the top of the zippers having to do with me picking a crappy construction order and not noticing I grabbed separating, not regular, zippers.

As you may recall these pants were inspired by both Yoshimi and Amber’s recent takes on the skinny cargo. Amber, in particular, went into great detail on the construction of her knock-offs, and mine are essentially knock-offs of her knock offs.

I started, natch, with my particular version of the Jalie 2908 stretch jean pattern. Now, I feel a bit bad pimping this pattern (not that it’s a bad pattern, or doesn’t deserve pimping) because my version is distinctly altered. In particular, I went down a size, lowered the rise, darted the yoke, narrowed the leg to straight below the knee, and replaced the straight waistband with a contour one originally cribbed off the Ellen pants. Also added five inches or so of length, but that sorta goes without saying. So if you see my jeans and decide to order the pattern, well, you’ll have a bit of work ahead of you.

Anyway, I have previously produced at least four versions (for me) from this pattern, all of which are staples of my wardrobe (except for the capris, which I can’t wear right now due to weather, and the red-topstitched ones, which were out of commission after I pulled the pull of the zipper a month or so ago. I hate mending, but finally got to it earlier this week.)

Now, turning this jeans pattern into a skinny-cargo pattern required a bit of work. First

off, as I traced out a version of my Jalie pattern, I had to figure out how to replace the yoke with a regular back with darts. I sorta winged this, and thanks to the mercy of stretch denim it seems to have worked. I also had to figure out how to reconstruct the front pocket area, but that was pretty straightforward. Then it was a matter of deciding where I wanted my seams to run (much referring to Amber’s post on the matter), hacking up this version of the pattern, labelling where I needed to add seam-allowances (not to mention up, down, inseam, and outseam), and re-tracing all my pieces with their proper seam allowances. Whew! I took the opportunity to incorporate my rear darts into the back seam, as well as adding a bit more butt-shaping, although I can’t really tell if that was successful as it is covered by the back pockets. I removed one cm off each side of each seam at the ankle, for a total of 8cm around the whole ankle, which made it pretty narrow, although I suspect I could still get my foot through without the zippers. The zippers make them VERY easy to put on and take off, though.

I can’t decide if having the pattern in so many itty bitty pieces saves fabric or not. Jeans are pretty economical at the best of times, so with the added fabric required for seam-allowances, maybe not.  Plus there’s those big pockets eating up fabric.

Because there were so many pieces and in particular the lower leg pieces are almost identical, I opted to cut and assemble the entire front and then the entire back. This is fine, except that I should’ve incorporated the side zipper in the lower leg into the original construction of the front instead of ripping out topstitching to fit it in later. But, we live and learn. Seeing as it’s only been a few days since I last installed a fly front zipper, I didn’t even need to look up the tutorial on it! It helps when you’re wearing jeans while sewing… I find I look down a lot to reference which side the stitching should be on ;). I opted to make the fly angular to echo the slanted hip pockets. Nothing to do with it being easier than a curve. Nothing at all. 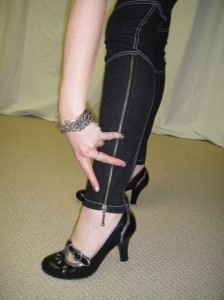 Once I had the front and backs assembled and topstitched, I had to do a bit of thinking. I couldn’t find a good reference on how to insert exposed zippers into a seam (though I didn’t look terribly hard). I decided for simplicity’s sake I wanted the zipper to fall in the front part of the pants, not straddling the seam evenly. Then I discovered that the cute little zippers with the nice little bauble at the end I picked up last weekend were, in fact, separating zippers.

I toyed with the idea of going back and getting different zippers, but I really like that bauble. I do wish these zippers came in silver (to go with my topstitching thread), but the selection at Fabricland is a bit limited. /sigh. Maybe I should’ve topstitched along the edges of the zippers, too? I think I was having topstitching fatigue by this point.

Because of the cargo pockets, I figured I needed to construct the outseam before the inseam. This is not as good for fitting as the reverse, but I was reasonably confident these would fit, due to the TNT pattern, so I went for it. The pockets were rather terrifying, I will say, especially getting them positioned and topstitched. Which is part of why I chickened out on most of the topstitching on the thigh pockets. We’ll see how much that irritates me in the days to come.

absolutely convinced it’s failed. It’ll be too big, too small, or just wonky looking. These were no exception—it was with immense relief that I wriggled into them the first time, discovered that the narrowed legs did indeed fit and that I could, in fact, zip up the zipper. Phew! This anxiety repeats again once I’ve attached the waistband. I tried a lighter waistband interfacing this time around, which was nice if only because it means I could make the buttonhole on the machine. On the upside, this iteration of the waistband is a nice width (some of my previous version were a little narrow) and doesn’t gape at the back. Yay!

Styling these is… interesting. My first effort, with the white cowl-neck top and the heels, is fine but a little, ah, mainstream? Doesn’t really feel like me. Nothing some biker boots and a little goth gear won’t fix. Ah, yes. Much better. 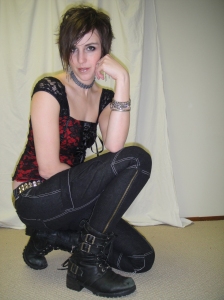 And I mustn’t forget to credit my delightful photographer: 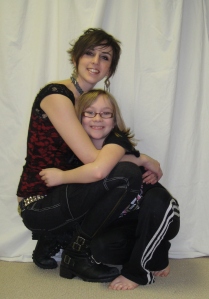 Me and my photographer

In exciting men’s sewing news, my hubby has consented to having the shirt muslin finished for a comfy wear-around-the-house shirt, now that I’ve enlarged the collar. Which means I might actually get photos of it at some point… though probably not for a few weeks as he leaves tomorrow.

25 responses to “Skinny cargoes: a tale of obsession”

Leave a Reply to Big in Japan Cancel reply