I think my eyes are bleeding...

Well, Syo’s request is complete, though I think I’ll be seeing after-images of this print for days. Overall, it went fairly well. Unsurprisingly, the shirt pattern I used as a base had way too much ease. It was designed for wovens, so I did go down a size, but evidently that wasn’t enough. So I took out about an inch of excess from each side and under the arm to get it to a fit she would approve. Fortunately with this design I didn’t need to worry much about what that would do to the armscye.

There were the usual technical glitches that crop up when I wing it. I decided in 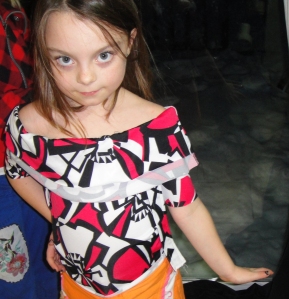 Can you spot what's wrong here?

advance that I would sandwich the front of the straps in between the drape and the shirt bodice, so that it would be firmly and neatly attached with the end hidden inside the double-layer drape (I didn’t want to attempt to do the back of the straps this way as I was pretty sure I would mess the length up). However, my first attempt at this fabric sandwich resulted in the picture at the right. That’s the straps peeking out from underneath the drape. Not going to work. So I had to pick them out (which took forever) and re-position.

It turned out that the way things rolled, the under-layer of the drape needed to be shorter than the outer, so I had to trim it off, after.

Then, my first attempt to sew the lower edges of the drape together to make a nice, enclosed piece (except for a small opening that had to be hand-finished) failed, leaving me with a mobius-strip-like wad of fabric that couldn’t be unravelled. So I cut off the seam on that (no way was I unpicking that much), which cost the drape some width. Ah, well.

My next attempt, fortunately, did work. I tried to take a picture of what I did to show it but it made no sense to me looking at it after, so I’ll leave it to your imaginations. Unfortunately, pinning wasn’t really an option for this method, so combined with the somewhat irregular trimming and cutting, the drape didn’t end up all going together as flat and smooth as it might. Ah, well. The look’s not bad (perhaps I should’ve rotated it all an inch, that way the pulling would look more intentional?)

The hems were kind of my waterloo. I used my latest double-needle. Can we say 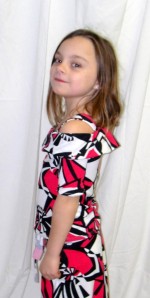 “tunneling”? My usual trick of ironing wash-away stabilizer into the hem before sewing failed because the stabilizer would not stick to this slippery swimsuit-feeling fabric. To make matters worse, the serged edge I put on the bottom of the shirt (to neaten the inside of the hem) kept squishing up between the two needles, making the tunneling between them even worse. And while this wasn’t the wiggliest knit I’ve ever worked with, it is the wiggliest slippery knit. So don’t look too close at the hems… it ain’t pretty.

And no, I didn’t make her a matching skirt. That’s Tyo’s contribution so far, turning the remnant of the fabric into a wrap skirt.

Also I couldn’t find my twill tape for putting in the tag, so I substituted a bit of pink seam-binding from one of the vintage sewing notion scores. It seems to be working, though we’ll see how the transfer adheres after washing (I find it sticks better to the textured twill-tape than to the satiny ribbon I’ve sometimes used).

Straps and a cute little label

Now Tyo can’t decide if she wants a shirt like this, or a sweater like my Kimono Lady Grey (which she’s been stealing on me, by the way). I told her I’m not making her any sweaters unless she agrees to hand down some of the myriad of bunnyhugs (hoodies to the rest of the world) she’s been hoarding for the last few years—y’know, the ones that don’t cover more than half her forearm but she somehow can’t quite give up?

The construction is a mix of the old stretch stitches on my regular machine and the serger; mostly depending on how much control I needed at any given point. Perhaps someday I’ll be able to construct things entirely on the serger, but not yet.

Next up: more fun with Lekala patterns (and unfortunate fabric choices… sigh…)

13 responses to “A loud little shirt”