I’ve mentioned before I’m a self-taught sewist. For a long time I figured that anything I couldn’t sort out on my own, I’d ask my mom. This worked well when I lived in my home town, but started to become problematic when I moved out of province. Especially about a year ago, when I was starting to entertain notions of learning how to sew well. One thing I did was do some quick internet surveys of recommended texts on sewing. The idea of actually studying sewing had never occurred to me before, but since I’m a researcher by trade it really was a natural progression. And then, one day around last Christmas, I stumbled on a copy of the “Reader’s Digest Complete Guide to Sewing” at the thrift store.

This was on the short list of recommended texts. I snaffled it up, read through voraciously, and went on to make my daughters some coats. Then I discovered the world of sewing blogs, and the forums on PR, and Burdastyle.com, and, well, I was off.

Well, a few weeks ago, a number of volumes of the Singer Sewing Reference Library showed up at my local Value Village. And I resisted. Probably most of the information was already in my Complete Guide. Probably it was all super-dated, anyway.

And then Cidell went and reviewed one of the volumes. Interestingly, Carolyn also listed the series among her favourite sewing books, but none of the volumes she has are ones that were available to me. And there’s a whole one on tailoring, apparently. D’oh!

Anyway, yesterday I was feeling a little foolishly flush, and they were still there and, well, they’re only three bucks each, and it’s five for the price of four, and… well, I came home with five of the set.

I did not buy the home dec volumes. Sorry. Maybe I will be more interested in home-dec sewing when I a) don’t live in a bleak rental house decorated in a scintillating palate of cream, ivory, and ecru. And b) can afford to decorate with the kinds of sumptuous fabrics my imagination demands. In the meantime, home-dec sewing = meh (which hasn’t stopped me from sewing my own curtains, or curtains and bed-drapes for my kids, but I’m not going to spend money learning to do it.)

So… Cidell talked about the Activewear volume already. Sewing Essentials seems to cover the basics, which I think I mostly have down when push comes to shove but hey, pictures are always great. Sewing Specialty Fabrics has to be good to have on hand, and covers everything from silk to bouclé to gabardine to lace to fur (fun or otherwise). The Perfect Fit is considerably more detailed than the five or so pages on fit in the Complete Guide, and has a small bit on swayback alteration, although it’s in the pants section, which isn’t was usually gives me the most trouble. I was a bit concerned over Sewing for Style (which style? 80s?), but it’s got a large chunk on tailoring, so I decided to go for it (but see above about the actual tailoring volume). I’d still like to get a real tailoring book at some point, but every little bit helps.

And, there was about 2 yards (just shy of 2m) of this lovely wool tweed. Isn’t that a great heathery-grey-mauve colour? At least half the nice fabric I’ve ever found at Value Village has been lovely wools. I hypothesize that people buy them and then are too intimidated/lazy to actually make the coat, and they end up in the thrift store alongside the godawful polyester and that “what was I thinking?” print. I wish there was enough to make this my Lady Grey Fabric, but even if I used something else for the facings, collar, and belt, I think not. Maybe a nice little blazer instead.

Me and my fantasy blazers. /sigh. 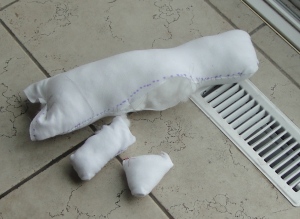 In other news, Syo has been working hard on her hand sewing. She has now learnt to cut her own thread, thread her own needle, and even carefully marks out her stitches on the fabric beforehand. She has been putting these skills to good use creating an assortment of little pillows for the toys of the house.

Her knots, however, leave a little to be desired, as you can see.

We also (sigh) bought Tyo a “play coat” at the thrift store. It’s big, poofy, ugly, water- and wind-resistant, and most importantly easy to move in. Well, easier. There’s always going to be a certain amount of restriction when you look like a marshmallow. Ah, well. At least this way the Princess coat won’t be coming home soaked with muddy slush when the chinooks hit.

14 responses to “My sewing library…”