Red and black, two of my favourite colours. Speaking of which, the buttonholes have been bound. 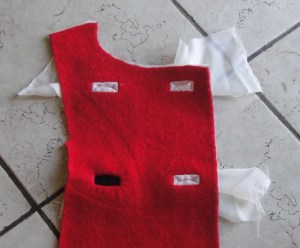 Buttonholes on the coat. Poking the "organza" squares through.

Then, I tack them down (after judicious ironing) in the back. 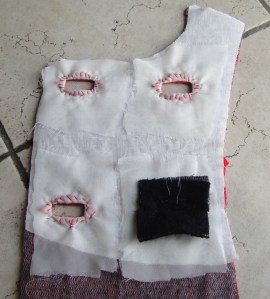 Gertie suggests using silk organza that matches your fashion fabric. I have no organza (as far as I know), and I’ve never sewed with silk in my life. I also didn’t have anything light and crisp in red. So I used this off-white (chiffon? I really suck at the names for these floaty fabrics, as I tend to avoid them like the plague. But I salvaged a crapload of this stuff after a wedding last summer. It’s gone to make the sheer JJ, and the rest will someday become a tiered petticoat.) I suspect silk organza would be a lot stronger, and maybe a more firm weave? 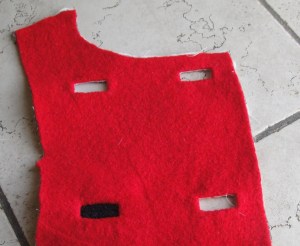 Don't they look nice from the front?

You can see a tiny bit of the chiffon from the front. I made extra sure when sewing on the strips that none of this showed through. 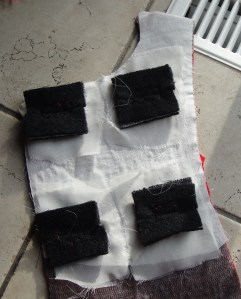 The basted strips in position

As you can see, my strips are kinda massive. (They’re also interfaced, and I added an extra layer of white interfacing to the inside of the front mostly so I could see my markings better.) I am debating whether to trim them down or leave them that way—if anyone has strong opinions I’d love to hear them. 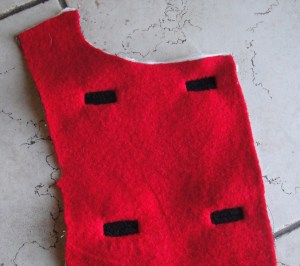 And stitched in place by hand.

Don’t they look lovely? I will leave them basted for now (at least until we go buy buttons). Now all I have to do is get the facings to line up. Oh, and did you notice my lovely iron-mark on the front of the fabric? *headdesk* Mostly I remember not to do this. Mostly.

Anyway, back to the poppies. Are we all marking Remembrance Day today? I am lucky enough not to have any family members involved with wars of any kinds (even my grandfathers sat out WWII). I’m also not organized enough to get to any of the various ceremonies they have around. So consider this my little moment of silence.

In Flanders Fields the poppies blow
Between the crosses row on row,
That mark our place; and in the sky
The larks, still bravely singing, fly
Scarce heard amid the guns below.
We are the Dead. Short days ago
We lived, felt dawn, saw sunset glow,
Loved and were loved, and now we lie,
In Flanders fields.
Take up our quarrel with the foe:
To you from failing hands we throw
The torch; be yours to hold it high.
If ye break faith with us who die
We shall not sleep, though poppies grow
In Flanders fields.

Tagged as a coat for Tyo, bound buttonholes, coat, coats, For Tyo, in progress, Remembrance Day